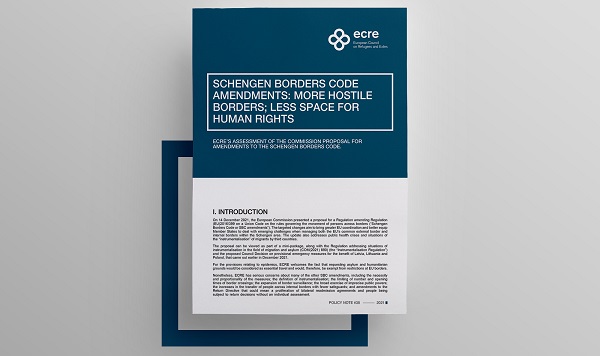 ECRE published a Policy Note on the European Commission’s proposal for a Regulation amending Regulation (EU)2016/399 on a Union Code on the rules governing the movement of persons across borders (“Schengen Borders Code amendments”).

The European Commission presented the proposed Regulation as part of a of a mini-package of three new proposals, along with the proposed Council Decision on provisional emergency measures for the benefit of Latvia, Lithuania and Poland of early December 2021 and the proposal for a Regulation addressing situations of instrumentalisation in the field of migration and asylum (COM(2021) 890) (the “Instrumentalisation Regulation”)

ECRE has serious concerns about many of the other SBC amendments, including the necessity and proportionality of the measures; the definition of instrumentalisation; the limiting of number and opening times of border crossings; the expansion of border surveillance; the broad exercise of imprecise public powers; the increases in the transfer of people across internal borders with fewer safeguards; and amendments to the Return Directive that could mean a proliferation of bilateral readmission agreements and people being subject to return decisions without an individual assessment.  For the provisions relating to epidemics, ECRE welcomes the fact that requesting asylum and humanitarian grounds would be considered as essential travel and would, therefore, be exempt from restrictions at EU borders.

For these reasons, ECRE recommends rejecting the most harmful amendments, such as the concept of instrumentalisation itself and the restriction of access at the border for people who could be seeking asylum. ECRE also proposes improvements should these concepts be maintained.

A summary of ECRE’s recommendations for the co-legislators is included at the end of this note, which should be read in conjunction with ECRE’s more detailed Comments on the Schengen Borders Code amendments and the Instrumentalisation Regulation.