Policy Note ‘No reason for returns to Afghanistan’ Translated into Dari 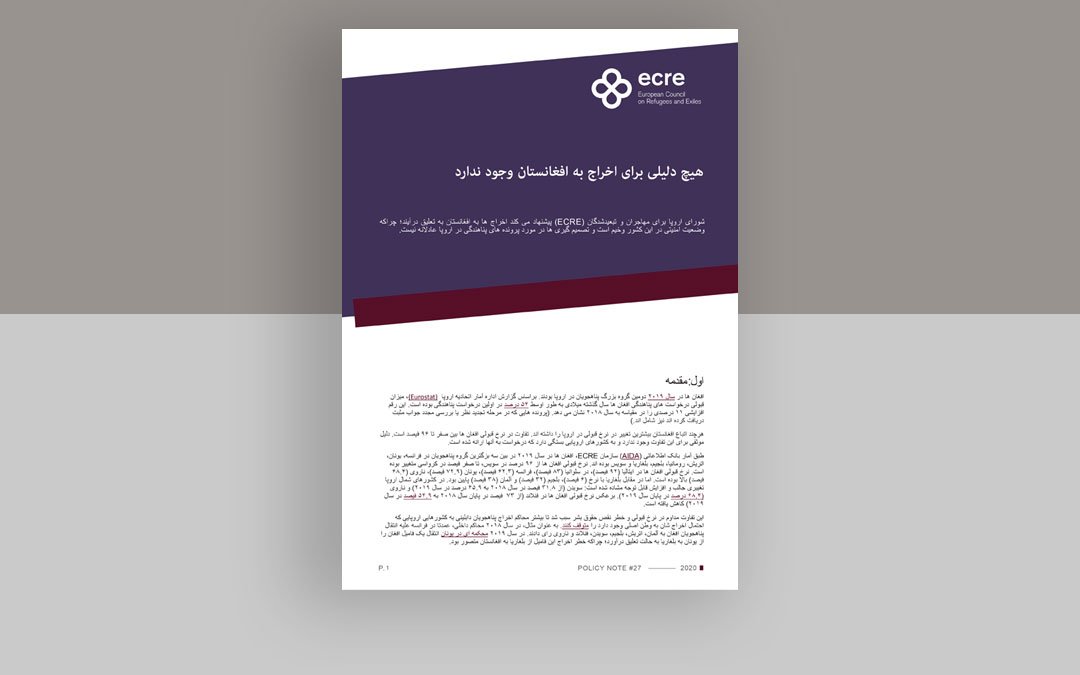 ECRE published the Policy Note ‘No reason for return to Afghanistan’ in Dari. It is an updated and translated version of a Policy Note published in 2019.The Policy Note looks at the treatment of applications for international protection from Afghan nationals, considering recent policies and guidelines and the approach of national courts.

Afghan nationals were the second biggest group to seek international protection in Europe in 2019. They face the largest discrepancy in recognition rates in Europe, with the rate varying from 0% in Croatia to 96% in Switzerland, with no apparent reason for the divergence such as the nature of the cases.  This persisting divergence and the risk of human rights violations that result from it have prompted an increasing number of courts to suspend Dublin transfers of asylum seekers to countries where they would be at risk of onward deportation. In 2018, for example, domestic courts – mainly in France – ruled against transfers of Afghan asylum seekers to Germany, Austria, Belgium, Sweden, Finland and Norway. In 2019, a court in Greece suspended a transfer to Bulgaria because of a risk of refoulment to Afghanistan

The Policy Note has a particular focus is the internal protection alternative (IPA). In EASO’s first country guidance note published in 2018: ‘Country Guidance: Afghanistan’, EASO concluded that Kabul, Herat and Mazar-e Sharif could be considered as a reasonable location for an IPA for single, able-bodied adult men and for married couples of working age with no children, i.e. persons with these profiles from elsewhere in Afghanistan could be transferred to these cities, regardless of whether they have a support network there. However, in its 2019 country guidelines, EASO added that IPA should not be considered for Afghans who were born or grew up outside Afghanistan without a support network in the country. The UNHCR Eligibility Guidelines for Assessing the International Protection Needs of Asylum Seekers from Afghanistan published in 2018, concluded that, due to the negative trends in the security situation, the overall situation of conflict and human rights violations, and the adverse impact on the broader socio-economic context, an IPA is generally not available in Kabul.

ECRE will continue advocacy to halt returns to Afghanistan until there are significant changes in the situation in Afghanistan and ECRE’s prerequisites for return are in place in Europe. The Policy Note includes specific recommendations to address the current situation.