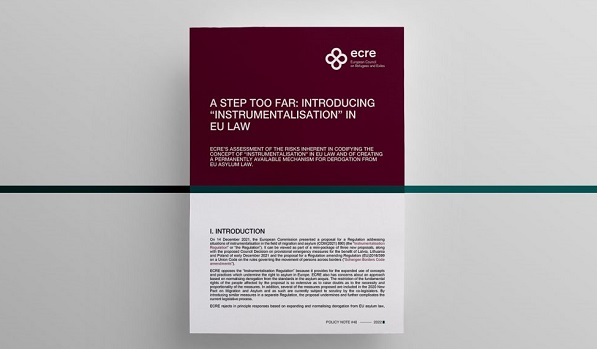 ECRE published a Policy Note on the European Commission’s proposal for a Regulation addressing situations of instrumentalisation in the field of migration and asylum.

The European Commission presented the proposed Regulation as part of a mini-package of three new proposals, along with the proposed Council Decision on provisional emergency measures for the benefit of Latvia, Lithuania and Poland of early December 2021 and the proposal for a Regulation amending Regulation (EU)2016/399 on a Union Code on the rules governing the movement of persons across borders (“Schengen Borders Code amendments”).

ECRE rejects in principle responses based on expanding and normalising derogation from EU asylum law, especially in the context of widespread non-compliance and given that the legal framework already provides sufficient flexibility for Member States.

ECRE opposes the “Instrumentalisation Regulation” because it provides for the expanded use of concepts and practices which undermine the right to asylum in Europe. ECRE also has concerns about an approach based on normalising derogation from the standards in the asylum acquis. The restriction of the fundamental rights of the people affected by the proposal is so extensive as to raise doubts as to the necessity and proportionality of the measures. In addition, several of the measures proposed are included in the 2020 New Pact on Migration and Asylum and as such are currently subject to scrutiny by the co-legislators. By introducing similar measures in a separate Regulation, the proposal undermines and further complicates the current legislative process.