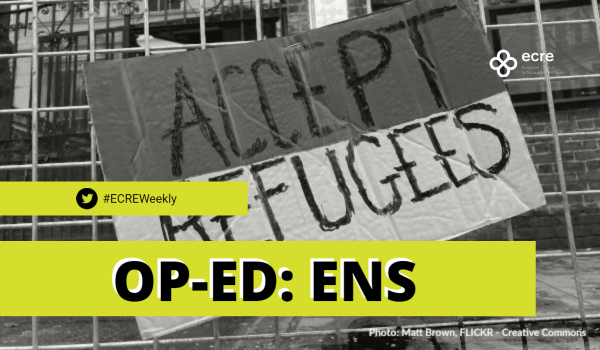 By Chris Nash, Director of the European Network on Statelessness (ENS)

We know from our work that stateless refugees typically face additional challenges crossing borders and accessing protection. As the number of refugees fleeing Ukraine nears five million, what does this mean for stateless people displaced by the current crisis?

As we set out in our recent briefing, 82,550 people in Ukraine were recorded as stateless in 2001 and UNHCR estimated there to be at least 35,875 in 2021. Other sources suggest there could be many tens of thousands more including a large proportion of the Roma population as well as children born in the occupied territories since 2014. Most are stateless ‘in their own country’ due to legacies of state succession, territorial disputes, and discrimination faced by minoritized groups. But stateless refugees and migrants from other regions also live in Ukraine. The vast majority of stateless people will lack any documentation proving that they are stateless, posing significant barriers to accessing protection.

We know from our Ukrainian member organisations working bravely inside the country that many stateless people find themselves trapped without the resources and documentation to leave, worried about future return, and sometimes without access to assistance available to others displaced within the country. There have also been disturbing reports of discrimination at Ukrainian borders, which may be preventing some stateless people – many of whom belong to minoritized communities – from leaving Ukraine.

The initial response of Ukraine’s western neighbours has been generous, with government actors and civil society doing their utmost to welcome and receive unprecedented numbers of refugees. Hungary, Slovakia, Poland, Romania, and Moldova have all stated that they are currently admitting everyone fleeing the war in Ukraine, including stateless people, those at risk of statelessness and/or undocumented people.

However, the picture is fast-moving and there is a need for vigilant monitoring on the ground. Emerging evidence points to inconsistent practices and racial profiling at different border crossings (e.g., in Hungary and Poland) with non-Ukrainians and those without documents to prove their identity facing barriers to accessing the territory, additional screening procedures, and even detention. Further analysis is needed to understand the detailed picture in terms of how different profiles of stateless people are likely to be affected. We will be providing regular updates from our members here.

There are key gaps in the EU Temporary Protection Directive (TPD) for stateless people and those at risk of statelessness from Ukraine. Currently, only Ukrainian nationals, people who had international protection in Ukraine before 24 February 2022 (and their family members), and people who had a permanent residence permit and can’t return to their country of origin, are eligible for immediate protection. EU countries can apply the Directive to other groups at their discretion, but it still excludes most of the population affected by statelessness by default.

One of the problems with the TPD and the Commission’s accompanying guidelines is that they assume that people from Ukraine will have documents to prove their nationality or right to residence in Ukraine. The majority of stateless people in Ukraine are stateless ‘in their own country’ but unable to prove their links to Ukraine (or any other country) through documentation. Although Ukraine was working to identify and resolve statelessness through improving procedures to confirm Ukrainian nationality, as well as a new statelessness determination procedure and (temporary) residence permit for recognised stateless people, many thousands of cases remain unresolved, leaving people in limbo.

Addressing statelessness as part of the developing refugee response

There are several things that urgently need to happen to ensure that stateless people from Ukraine can access protection in line with international law.

First and foremost, EU Member States should use their discretion under the TPD to extend temporary protection to all those fleeing Ukraine, including stateless persons and those at risk of statelessness, regardless of prior nationality or residence status, or at least guarantee access to equivalent forms of protection under national law.

Linked to this, it is critical that lack of documentation does not prevent people from accessing international protection, nor protection from detention. The Commission’s guidelines should be updated to allow more flexibility and account for the inability of most stateless people to prove their links to Ukraine through documentation.

Border officials and refugee response actors should have access to training, tools, and resources to support the identification and recording of (risk of) statelessness among those displaced from Ukraine to improve both data and access to protection. The EU Asylum Agency’s new Practical Guide on Registration is a useful tool and our member in France has just published a more detailed guide on identifying statelessness, which will be adapted and made available for other contexts and languages in the next few months.

Finally, it is vital that (risk of) statelessness among unaccompanied and separated children, as well as children born in transit and host countries, is identified to prevent a new generation growing up without a nationality.

Over the coming weeks and months, we will continue to monitor the situation, as well as update and expand the scope of information available. We continue to support the tireless work of our members on the ground, including by linking them with donors and working together to produce new information tools.

Looking further ahead and beyond this unspeakably awful conflict, there will be a critical need to address legal identity, documentation, and nationality issues as part of re-building efforts. The current situation is a sobering reminder of how stateless people routinely suffer from being forgotten and their needs ignored, especially in times of conflict. We cannot allow this to happen, and we and our members stand ready to work with all actors to guard against this.