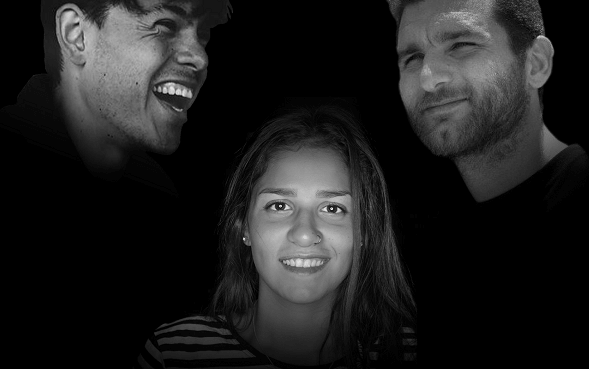 Seán Binder and Sarah Mardini are humanitarian volunteers who were arrested by Greek Authorities in August, and currently remain detained while they await trial. They have been accused of assisting refugees to enter Greece illegally, of being members of a criminal organisation, and of espionage. We hear from two friends of the volunteers, who shedd light on the case and the efforts of their friends and family to prove their innocence.

For over a month, several volunteers of a Greek NGO active on Lesvos, an Island which hosts what was the first refugee screening centre or ‘hotspot’ in Greece known as Moria camp, have been behind bars. Despite tight cooperation with Greek authorities in search and rescue operations and clearance from the state to operate inside refugee camps, they were arrested in August on suspicion of money laundering, espionage and membership of a criminal organisation. All four and the NGO itself deny all charges. Yet according to Greek law, they might have to face up to 18 months of detainment (so-called “pre-trial detention”) before they can argue for their innocence in court.[1]

Seán Binder is a 24 year old German citizen who lived in Ireland since the age of 5. He had been in Lesvos to assist with refugee rescue since he graduated from the London School of Economics in Autumn 2017. Seán’s personal history and extensive studies inspired his interest in humanitarian work and international relations, and motivated his decision to volunteer in the field in Greece. Seán was arrested on August 28 as he went to the police to ask for further information regarding the situation of his colleague, Sarah Mardini, who was arrested whilst boarding her plane back to Germany, where she is currently enrolled as a student. Seán is now in prison on the Greek island of Chios, after spending nearly 30 days in a jail station in Lesvos, without being allowed out – without even seeing daylight during that time – except for once at his court hearing.

Sarah Mardini is 23 year old who was herself a refugee. Three years ago she rescued 18 refugees in the Aegean Sea with her sister Yusra, diving into the water and guiding their sinking boat to the coastline of the Greek Island of Lesvos. The sisters went on to be granted asylum in Germany. Sarah received a scholarship to enroll as a student in Berlin, and Yusra competed in the 2016 Olympics’ Refugee team. The two sisters were awarded the prestigous Bambi award – the main German media award – in the category of ‘Unsung Heroes’.

Eventually, Sarah returned to Lesvos to volunteer alongside Seán, juggling her full-time studies in Berlin with her humanitarian work in Greece. Since August 21 she has been incarcerated in Korydallos Prison, a high-security facility in Athens.

The police are also investigating 30 other individuals in connection to the case including two colleagues of Seán and Sarah, Nassos Karakitsos and another person who wishes to remain anonymous.

The news of the arrest of Seán, Sarah and all the volunteers has been met with wide incomprehension – be it from family, friends, colleagues and their lawyer, Haris Petsikos. Mr. Petsikos maintains that “there is no evidence whatsoever that [Sarah and Seán] have committed even one of the offences they are accused of…on many of the dates when they are supposed to have committed offences they were not even [in Greece]”, this has been further evidenced by Sarah’s university[2] which confirmed that she was attending classes at the time of several “incidents” she is accused of. However, it remains unclear whether any of the volunteers will effectively be released before the trial. Séan’s and Sarah’s appeal to lift their detention until trial was denied on September 10. For now they are facing at least another 40 days in detention[3].

Whilst the case is still ongoing, a legal team is working hard to make sure that Seán, Sarah and all volunteers are cleared of the allegations and accusations against them. Off-the-ground, family, friends, colleagues and most recently journalists and politicians are putting their efforts together to draw attention to this case in Greece, Germany, and generally Europe-wide. The case has finally even reached the inner circles of the European Parliament. Indeed, the relentless efforts from friends and family have included writing to MEPs with notable success. Mr. Matt Carthy, an Irish MEP for Midlands North West, addressed the European Parliament to raise the demand for Seán and Sarah’s release, as he communicated via Twitter on September 14[4]. German MEP Sabine Lösing and the European Parliamentary Group “European United Left–Nordic Green Left” sent a first letter to the Greek Minister of Justice, Transparency and Human Rights; Mr Kalogirou. Further help from Germany has come both from the Ministry of Foreign Affairs and the German Embassy in Athens, as well as from Katina Schubert, Chairwoman of the Berliner “Die Linke”, who even went to Greece to visit Sarah in prison.

A joint letter has also been published and signed by 59 organisations including the Greek Council for Refugees, Oxfam and more, highlighting their concern and calling for Sean and Sarah’s respective releases till their trail.

The family and friends of Seán and Sarah are grateful for the help the case has received so far. Whilst expressing trust and confidence in the Greek judiciary, further help and awareness is needed so as to ensure that justice will prevail. Demonstrations are planned by their family and friends in Berlin and Dublin to call for their release (these dates have not been confirmed yet). Information on how to raise attention – be it via social media or by contacting an MEP – can be found on www.freehumanitarians.com. Additionally, a petition has been launched on September 26: https://you.wemove.eu/campaigns/free-humanitarians. Seán and Sarah’s fate has precedents and we must hope that – like for many humanitarian volunteers before them – widespread support from the public and politics will permit these two volunteers to be freed with the shortest delay.