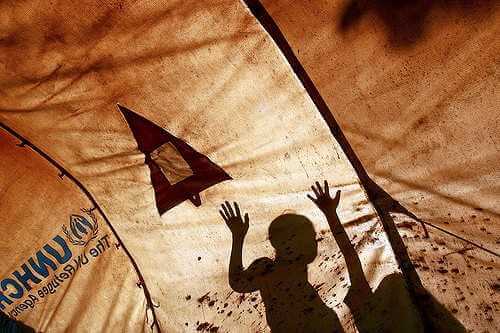 Persisting with the status quo ad hoc, State-by-State approach to implementing refugee protection obligations is not an option. Too often, refugees are forced to risk their lives in order to save their lives, with increasingly sophisticated barriers to access forcing them to undertake risky voyages and to rely on smugglers and even traffickers to reach safety.

The safety on offer is in any event too often illusory.

While long-term detention in camps is less common than in the past, it is still the reality for roughly a third of the world’s refugees, with most others left to struggle in urban slums with no real access to the rights that the Refugee Convention in principle requires. Worse still, more than 13 million refugees – two-thirds of the total number of refugees – have been waiting an average of two decades for a durable solution, with none in sight. Of these, fewer than one per cent are resettled in any given year. In the result, just 10 – mostly very poor – countries now host more than 60 per cent of the world’s refugees, with the entire developed world taking in only 15 per cent of those in need of asylum.

And yet those same rich countries spend about €20 billion each year to fund their refugee reception efforts, more than four times the amount the United Nations refugee agency (UNHCR) has available to meet the needs of the 85 per cent of refugees in poor countries. The result is a protection regime that is risky, chaotic, and debilitating, with resources grossly misallocated relative to needs, and which does not provide durable solutions for most refugees.

If ever there were a case for a dramatic and fundamental reform, it is surely the current mess of a global refugee system.

Yet, the answer offered by UNHCR under the grandly titled “Global Compact on Refugees” is decidedly ‘thin’. Rather than proposing, for example, a binding optional protocol to remedy the operational deficiencies of the Refugee Convention, the refugee agency has instead drafted a highly partial Compact, applying to undefined ‘large’ movements of refugees. If a situation is so defined, the only thing promised by the Compact is that its principles will serve as guideposts for a never-ending series of discussions. We will reinvent the proverbial wheel each and every time there is a ‘large’ movement of refugees, since every situation will require a new agreement, which will only ‘normally’ be based on the listed, incredibly vague principles.

In truth, the clearest output of the Compact is that there will be lots and lots of meetings to chat about how best to respond to ‘large’ refugee movements: we will have a periodic Global Refugee Forum; high-level officials’ meetings between forums; meetings of national steering groups; support platforms; solidarity conferences; and regional consultative mechanisms. And these will be supported by ‘a multi-stakeholder and partnership approach’ comprising consultations with refugees and host communities, humanitarian and development actors, the UN system, local actors, networks of cities and municipalities, parliaments, faith-based actors, public–private partners, sports and cultural organizers, and even a global academic network.

The Compact, in other words, is all about process – a bureaucrat’s dream perhaps, but nothing that comes even close to dependably addressing the operational deficits of the refugee regime.

Why were we presented with such a tepid response when the need for decisive action is so clear? Why a ‘thin’ approach to protection reform when something robust is so obviously what both refugees and the poorer States that receive most of them need and deserve?

UNHCR defends its minimalist effort on the grounds that the current political environment is simply not receptive to big picture reform. It makes more sense, the agency suggests, to consolidate traditional standards in tandem with a voluntarist framework that will at least get States talking about burden and responsibility sharing. To strive for more would be to risk complete failure.

I think this assessment is mistaken.

Even if it is unwise simply to assume a strong commitment to global human rights or to multilateralism in general, one should advocate exactly the opposite of what the agency has proposed. If you believe that the commitment to global human rights is in retreat, then the answer is not a ‘thin’ version of protection under which we simply pay lip service to burden and responsibility sharing by setting up an endless loop of conversations. The answer is instead clearly and firmly to show how a dependable, managed model of sharing could meet the needs of all. And if you believe that the commitment to multilateralism is in decline, then the answer is not to ‘go thin’, but rather to show how a multilateral reform can be made to deliver at the local level – providing real benefits for real people in real communities that receive refugees.

In short, the best defence is a good offence.  The last thing we should be doing is proposing – as UNHCR has done – an endless procession of voluntarist pledging conferences that may, or may not, deliver.

In an article to be published in the next issue of the International Journal of Refugee Law, I explain my concerns in more detail and outline my vision for a clear and workable alternative model of protection reform.

I think we need to call out this global ‘compact’ for what it really is – a ‘cop-out’. We should be clear that we do not need a Compact ‘on’ refugees, in which refugees are simply the object, not the subject, of the agreement. It is high time for a reform that puts refugees – all refugees, wherever located – first, and which recognizes that keeping a multilateral commitment to refugee rights alive requires not caution, but rather courage.