Op-ed: The EU Must Stop Trapping Migrants in Libya or Risk Complicity in Crimes Against Humanity and War Crimes 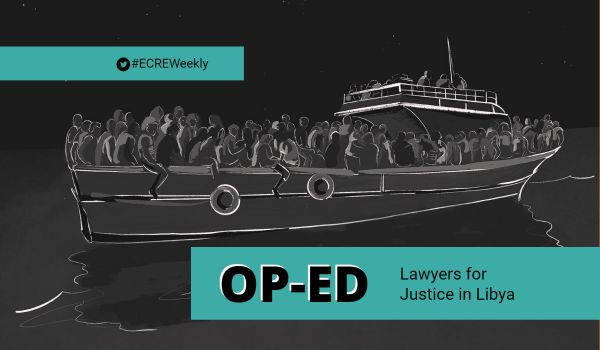 Co-authored by Marwa Mohamed, Head of Advocacy and Outreach at Lawyers for Justice in Libya (LFJL), and Mae Thompson, Programmes Officer at LFJL.

European and African leaders met in Brussels on 17 and 18 February for the sixth European Union (EU) – African Union (AU) summit. EU and AU leaders last convened four years ago, days after CNN published a video of migrants and refugees being sold at an alleged slave auction in Libya: migration was inevitably a focus of that meeting. However, little progress has since been made to remedy the situation. In fact, EU migration policies have seriously worsened the plight of people on the move trapped in Libya. Long overdue, today’s summit is a vital opportunity for leaders to address the desperate situation. Continued inaction to correct damaging policies will confirm the EU’s complicity in crimes against humanity and war crimes.

During the 2017 AU-EU summit a joint statement was adopted condemning the conditions of refugees and migrants in Libya. The EU and AU agreed in the statement to work together with UN agencies and the Libyan government to ensure that migrants and refugees in Libya were provided with appropriate assistance and protection.

A Tripartite Taskforce was established to implement these undertakings. The Taskforce supported assisted ‘voluntary’ humanitarian returns and evacuation operations to return migrants and refugees to their country of origin or evacuate them to third countries in Africa, despite the complete lack of an asylum framework in Libya. Libya’s ongoing hostility towards migrants and refugees, in addition to political and security challenges, has meant that these schemes have had little impact on the ground. In recent years this has been further limited by the lack of continued cooperation from countries of origin and Covid-19 travel restrictions which halted all evacuation flights.

The summit should have commanded the urgency necessary for the EU to alleviate the suffering of migrants and refugees in Libya. Instead, beyond the weak-kneed task force, EU action quickly died out once the media spotlight shifted from the issue. Worse, the EU and its member states have pursued their relentless quest to keep migrants and refugees away from their own borders, exacerbating dire conditions for people stuck in Libya. As means to prevent migration to Europe, the EU has ceased to provide search and rescue at sea and has trained, financed and equipped the notorious Libyan coast guard. Since EU support began in 2016, the coast guard has intercepted and returned more than 90,000 people to face arbitrary detention, torture, sexual violence, extortion, forced labour and unlawful killings in detention. Many of the staff are former or current militia members implicated in horrendous abuses against migrants. The brutal practices of the coast guard are extensively documented, including by NGOs who have themselves become a target of abuse.

Crimes against humanity and war crimes

In October 2021, the UN Independent Fact-Finding Mission on Libya (the FFM) found that in recent years the international crimes committed against migrants and refugees are likely to qualify as crimes against humanity. In parallel, independent evidence of crimes against humanity and war crimes has been submitted to the International Criminal Court (ICC) by various rights groups, who argue that the widespread and systematic nature of the criminal conduct against migrants and refugees by state and non-state actors triggers ICC jurisdiction. Given these significant new findings, reforming EU migration policy and practice, in cooperation with the AU and its member states, must take priority.

Host of the current EU-AU summit, French president Emmanuel Macron, has already stated that migration will be discussed. While this is welcomed, it is crucial that EU migration policy reform is more than simply an agenda item. European and African leaders must work together at the summit and beyond to formulate a response to migration flows in the Central Mediterranean that is based on equitable collaboration and respect for human rights and international law.

As a first step, the EU and its member states should immediately agree to put an end to interceptions at sea and returns to Libya, and instead facilitate their disembarkation at a port of safety in Europe where their rights can be safeguarded.

Secondly, safe and legal pathways to Europe should be widened in the following two ways:

The UN High Commissioner for Refugees (UNHCR) estimates that almost 367,000 refugees along the Central Mediterranean Route (CMR) will need resettlement in 2022. Meeting these needs will require European states to reform their asylum framework including by massively scaling up resettlement admissions in line with the EU Pact on Migration and Asylum.

Countries of resettlement need to increase their quotas for refugees and invest in the administrative capacity of countries of origin, transit and destination to ease and expedite the resettlement process. These resettlement numbers should be equally distributed amongst countries along the CMR. This will avert a pull factor being created as a by-product of increased resettlement slots allocated to just one country and will also create a diversion from the need of migrants and refugees to travel to Libya, a country recognized as unsafe.

Increased opportunities for labour migration directly from countries of origin will reduce irregular flows of migrants to Libya and will also help to counter the growing weaknesses in European labour markets that have been underlined and entrenched by the Covid-19 pandemic. The EU should implement recommendations adopted by the European Parliament on how to broaden access to labour migration, including by establishing an admittance scheme for non-EU, low and medium-skilled workers, an EU-wide talent pool to effectively match migrants’ skills with labour market needs, a framework for recognition of skills and qualifications and multiple entry visas for immigrant entrepreneurs.

Call to the EU

Committing to a rights-based and collaborative response to migration flows is the best way to protect migrants and refugees from grave crimes and serious human rights violations along the CMR. Doing so would contribute to the fight against the transnational crime of human trafficking by eradicating the demand and ultimately disempowering smuggling and trafficking networks. Consequently, irregular arrivals to Europe and the number of deaths at sea would decrease because people on the move would no longer be forced to turn to illicit and dangerous pathways.

At the 2022 EU-AU summit, European leaders must develop and commit to implementing a rights-based migration response. This means halting support to the dangerous and inhumane Libyan coast guard and supporting processes to end impunity. This also means widening safe and legal pathways to Europe in collaboration with the AU, countries of origin and transit. Failing this, migrants and refugees will continue to face crimes against humanity and war crimes in Libya and Europe will be complicit.