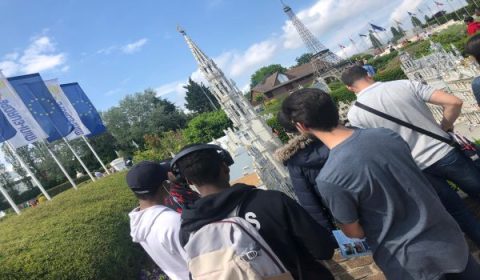 By Niki Papadogiannakis, programme development officer at SB OverSeas. SB OverSeas is a non-profit organisation based in Belgium dedicated to providing humanitarian aid to refugees and victims of conflict. Their operations support refugees’ access to education and inclusion in Brussels and Lebanon focusing on education, emergency aid, awareness and empowerment.

“Normal reactions to abnormal situations.”- It was only until I heard this characterization by a trauma specialist that I began to understand the mental health concerns of young refugees. This concept becomes even clearer when considering the reports from places like the Greek islands where adolescent asylum seekers have begun to act violently against each other. Attacks are common in an unsafe and deeply precarious camp setting and even some with fatal consequences. When you place their actions in the context of their situation, their behavior, while not excusable, becomes understandable. As described by researchers and practitioners, these reactions are normal when faced with stressors as severe as a migration journey, isolation and uncertainty. Moreover, they’re exacerbated by a lack of community whether familial or cultural. Yet mental health services are not accessible for most people living at the Moria camp, and remain out of reach for many refugees across Europe.

Psychologists and researchers have noted that without proper intervention, “refugees are at considerable risk of developing common mental disorders, including depression, anxiety, and posttraumatic stress disorder (PTSD).” This aspect is simple to grasp; individuals who are fleeing persecution, violence and unsafe living conditions have experienced trauma that impacts their mental health. However, further studies have indicated that post-migration stressors are just as, if not more harmful for mental health. Stressors including: “cultural integration issues, the loss of family and community support, discrimination and adverse political climate, loneliness and boredom, extensive waiting time during the asylum procedure, prohibition to work, disruption of education for children.” These stressors are associated with increasing uncertainty about the future, strongly connected to the asylum-seeking process.

Mental health services for refugees are often not a priority upon arrival. Given that even the immediate need for a safe place to sleep, something nutritious to eat and clean water to drink is sometimes not met in arrival camps at the European border, mental health services becomes an afterthought. This is not only a problem in camps at the European borders, often there is also a lack of support in medium and long-term accommodation facilities inside Europe. In Brussels, where SB OverSeas operates in support of young refugees living in accommodation centres in the city, the governmental accommodation service FEDASIL has been at the verge of capacity for almost two years. As a consequence authorities announced in January that reception services would not be available for asylum seekers who have applied for protection in another EU country; a decision that deprives these individuals of their rightful access to standard reception conditions. In this context of imbalance between available resources and needs, also confirmed by our observations and feedback, the focus from FEDASIL is on the material support for asylum seekers arriving: increased numbers of beds in rooms, adding tents in centres or installing containers. While understandable, this comes at the risk of neglecting other vital support.

Since 2016 SB OverSeas has been active in centres run by FEDASIL as well as the the Red Cross hosting unaccompanied young refugees.  We have worked to engage the youth in activities by bringing artists to teach, organising sports events, visiting places in the city together with a group of local volunteers among other things. These actions are aimed at improving mental health and resolve stressors by decreasing isolation and allow for social interactions and physical activity to overcome trauma. This is evident in our interactions:  When we start our activities the youth are isolated and non-social (most have never interacted with each other), but by the end they are more receptive and engaging as a group, building trust. These activities are a positive step for their mental health—but by no means can they be a replacement for professional psychological support.

Mental health interventions for asylum seekers and refugees must be individualised and sensitised to cultural and situational contexts. Such interventions require the training of mental health professionals in the local community where individuals are arriving or settling. It is vital to use evidence-based methods to address culturally-specific indicators of stressors, learning how to conduct therapy sessions through an interpreter, or better yet, involving a cultural mediator.

Across the world asylum seekers and refugees are of the most vulnerable to mental disorders. However, it is clear that the process of claiming asylum and the legal blockades that are presented to these individuals further exacerbate this pre-existing vulnerability.

Therefore, to address the mental health concerns of this population, it is not only necessary to expand access to culturally sensitive and situationally appropriate mental health services. The abnormal situation is one created by European governments and poor reception systems. Without a change to a more humane policy and the clear implementation thereof any positive steps forward for an individual’s mental health made by the support of therapists, professional psychologists, community action or other, will be reversed.