Op-ed: How a Syrian man, living in Cyprus got caught up in Hungary’s anti-terror laws 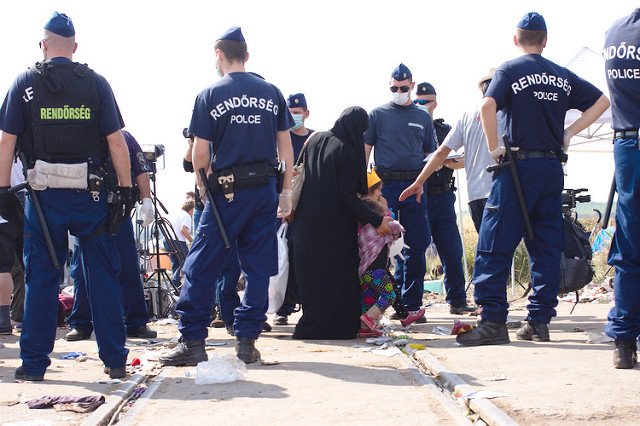 Ahmed walked into court handcuffed, shackled around the feet and waist, attached by a leash to men in balaclavas, as in every previous appearance. Despite this degrading treatment, he keeps his dignity and speaks with respect to the judge and lawyers. He had been hoping that this would be the final time he had to endure this humiliating show. But the judges’ decision sadly dashed that hope.

Ahmed has not set foot in the home he shares with Nadia, his Cypriot wife, and their two daughters for two and a half years. And after such a long and painful separation from his family, he is desperate to return home. Yet instead he remains languishing in a Hungarian jail, having been sentenced to 7 years on spurious “terrorism” charges.

His encounter with the Hungarian authorities began at the height of the arrival of refugees in Europe in the summer of 2015. But in contrast to his fellow Syrians, Ahmed was coming from Cyprus, where he was a long-term resident.

In August 2015 he had received a phone call from his elderly parents in Syria. There had been a lull in the bombing of their town and they were leaving to seek safety in Europe with his brother, sister-in-law and his nieces and nephews. Ahmed set off to Turkey to help them navigate their journey. But following clashes with police in Hungary, during which Ahmed spoke through a megaphone and threw a few stones, he was arrested and charged with an “act of terror.” After a trial that made a mockery of justice, he was convicted and sentenced to ten years’ imprisonment, by a judge whose decision was later annulled on appeal. The retrial, which was concluded this week (14 March) once again found him guilty and sentenced him to seven years’ imprisonment.

Ahmed’s case highlights the impact of draconian counter-terrorism legislation that was introduced at speed in Hungary. Laws providing for sweeping executive powers in the event of a proclaimed emergency, including the banning of public assemblies, severe restrictions on freedom of movement and the freezing of assets, were enacted in 2016. Vaguely defined provisions grant powers to suspend laws and fast-track new ones and deploy the army with live firearms to quell disturbances.

But it is not just Hungary that has introduced such measures. Indeed, a report by Amnesty International looking at 14 EU countries found a deep and dangerous trend towards permanent securitization. Hard-won protections—the human rights mechanisms and checks and balances built over many decades—are being dismantled.

Following the horrific Paris attacks, France declared a state of emergency. At the time, it was a temporary measure to ensure public safety. Human rights organisations, including Amnesty International, repeatedly warned of the danger of normalisation of emergency rule. As predicted, a new counter-terrorism law embedded into normal law many of the intrusive measures previously reserved for exceptional circumstances.

Discriminatory counter-terrorism measures across Europe have had a disproportionate and profoundly negative impact on Muslims, foreign nationals or people perceived to be Muslim or foreign. Amnesty International documented the discriminatory impact of France’s emergency measures, which included the closure of mosques and house searches without warrants, against Muslims. Discriminatory action by the state and its agents is increasingly seen as “acceptable” in the national security context. “Migration and mass population movement are bad, dangerous things which we want no part of,” said Hungarian Prime Minister Viktor Orban in a speech earlier this month.

Migrants and refugees, human rights defenders, activists and minority groups have been particularly targeted by new powers, with profiling often based on stereotyping, leading to the outright misuse of laws that define terrorism very loosely.  Nowhere is this clearer than in Ahmed’s case. Speaking into a megaphone and throwing a few objects towards the police cannot credibly be considered “acts of terror”. Especially not in the context of a riot in which more than 300 migrants had to be treated for injuries inflicted by police dressed in riot gear from top to toe, firing tear gas canisters and water cannon.

While our security forces must have the powers to seek out those who commit criminal acts and bring them to justice, measures taken to counter terrorism must be proportionate. They must respect everyone’s rights and they must not be discriminatory. They must be based on targeted and suspicion-based police work rather than overbroad surveillance and discriminatory operations. States must not invoke national security concerns to arbitrarily target migrants and refugees.

There is a tendency in some quarters to see rights as obstacles to combating security threats. In reality human rights serve two fundamental purposes that have never been more important. Firstly, to preserve individual rights and secondly to act as a guarantor of social cohesion in societies comprised of a multiplicity of identities and differences.

It is clear that the threat posed by terrorism leads to people having genuine fears, but we should be mindful not to sacrifice vast swathes of our rights and freedoms in the fight against it. The issue here is not just about saving lives but it is also about safeguarding our way of life. And the role of governments is to provide security so that people can enjoy their rights, not take rights away under the guise of defending them.

“Our lives have been turned upside down,” says Ahmed’s wife Nadia, holding her two young daughters close. “I try to be both mother and father to my children but it is very hard. We miss Ahmed and we are scared for him.”

Over 70 000 Amnesty International activists have supported Nadia and signed a petition calling for Ahmed’s release. Activists from the “Free the Röszke 11” campaign continue to push for his acquittal. Meanwhile the Hungarian government takes every opportunity to publicly incriminate Ahmed, jeopardising his right to fair trial particularly in the toxic atmosphere being whipped up ahead of the election.

Justice may not have prevailed this time but he will appeal and we will not stop fighting for him until it does so that Ahmed can return home with his family to live the quiet family life they were enjoying before that fateful summer of 2015. He, and his daughters and wife deserve nothing less.