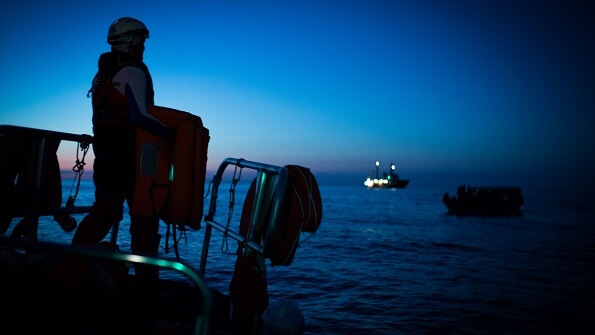 Lea holds a LLM in Human Rights Law from University College London and works as a legal researcher in London. She is a founding member of SOS MEDITERRANEE Germany, and supports their press and advocacy work.

In the span of four days, between Thursday 20 September and Sunday 23 September, the Aquarius – the rescue boat chartered by SOS MEDITERRANEE and Médecins Sans Frontières (MSF) – rescued 58 people in two separate rescue operations. On Thursday 20 September, the Aquarius rescued 11 predominantly Pakistani men from a small fiberglass boat. Upon detection of the boat in distress, the Aquarius unsuccessfully attempted to report the boat in need of assistance to the Libyan Joint Rescue Coordination Centre (JRCC). After receiving no response, the Aquarius went on to contact the Italian Maritime Rescue Coordination Centre (ITMRCC) to report the incident. Several hours after successfully completing the rescue operation, the JRCC finally contacted the Aquarius announcing that it had assumed coordination of the operation and requested that the Aquarius proceed to a meeting point to transfer the rescued to a Libyan patrol boat. In line with applicable Search-and-Rescue (SAR) and human rights conventions, the Aquarius responded that it could not transfer the rescued people, as Libya could not be considered a place of safety.

According to IOM guidelines, a place of safety is one: “where the survivor’s safety of life is no longer threatened and where their human needs (food, shelter, medical needs) can be met.” And although the Aquarius, for obvious reasons, is not a Contracting State to the Refugee Convention, it recognizes the principle of non-refoulement, which clearly and unequivocally states that people cannot be returned to a place “where his [or her] life or freedom would be threatened on account of his [or her] race, religion, nationality or membership of a particular social group.” This is also enshrined in the European Charter of Fundamental Rights.

Thus, the Aquarius resumed its search and rescue activities and conducted another rescue operation on Sunday 23 September. This in spite of receiving distressing news from the Panama Maritime Authority (PMA) that it would be revoking the Aquarius’ registration. The PMA communication stated that: “unfortunately, it is necessary that [the Aquarius] be excluded from our registry, because it implies a political problem against the Panamanian government and the Panamanian fleet that arrive to European port.”

SOS MEDITERRANEE was founded in the spring of 2015 as a direct response to the lack of rescue assets in the Central Mediterranean, following the cessation of the Italian Mare Nostrum operation. According to IOM estimates, between 2014 and August 2017, at least 14,500 people lost their lives in desperate attempts to escape Libya, by fleeing across the Mediterranean. In addition, recent UN statistics estimate that more than 1,700 people have already lost their lives this year. SOS MEDITERRANEE is thus deeply concerned what the cessation of its operations will mean for these numbers. For a long time now, SAR NGOs have filled the gaps left by governments, and SOS MEDITERRANEE has continuously called on European governments to increase rescue capacities in the Mediterranean, rather than attempting to unsuccessfully use the deaths as a deterrent, or cooperating with the Libyan government and coastguard, whose actions have been recorded to be in breach of fundamental human rights standards on a number of occasions.

Despite studies confirming that SAR NGO vessels simply reduce mortality risks, “or conversely, the absence of SAR operations lead to more deaths”, SAR NGOs have long been vilified. This latest manoeuvre by the Italian government is further proof of the extent to which European governments will go, to circumvent their maritime and human rights obligations and undermine the humanitarian work of SAR NGOs. It is in light of this that even though the PMA announcement came as a shock, the reasons given unfortunately did not. SAR NGOs have repeatedly been the subject of political pressures and as a result a number of ships are currently held back in ports, investigated for unfounded criminal activities and stopped from operating altogether.

SOS MEDITERRANEE fully acknowledges the pressures the Italian State has come under and recognizes that there has been a significant lack of support from other European actors. Since launching its operations in February 2016, SOS MEDITERRANEE has called for solidarity and support from all European states, and has repeatedly expressed its gratitude to the Italian government and the ITMRCC for their efforts in supporting the life-saving missions in the Central Mediterranean. Similarly, SOS MEDITERRANEE thanked the Spanish government for taking in 629 survivors rescued by the Aquarius in July. The organization also expressed its gratitude to the government of Malta for taking in 141 survivors, that had been stranded aboard the Aquarius in international waters for 5 days, due to a political stand-off. SOS MEDITERRANEE has always welcomed open dialogue with governments. The organization has, however, also been clear in expressing that these political conflicts should not be fought at the expense of innocents, who are trying to flee a civil war that has subjected many of the survivors to forced labour, torture, enslavement or sexual violence. It is time that a common European response is found and that SAR NGOs are no longer prevented from conducting vital rescue operations.

For many years now it have been the NGOs operating in the Central Mediterranean that have upheld the fundamental values and rights that lie at the core of each and every European State and the European Union as a whole – that have upheld Europe’s legacy as a protector of human rights. However, these latest developments may force the Aquarius – the last remaining NGO vessel operating along the world’s deadliest flight route – to cease its rescue operations, unless political assurances are given, or the Aquarius is issued a new flag.  It is in line with this, that in a joint press release SOS MEDITERRANEE and MSF called on European governments and heads of state to ensure that the Aquarius is able to continue its mission, by either reassuring the Panamanian authorities that all threats articulated by the Italian government are baseless and would not be effectuated, or by issuing a new flag straightaway to allow the Aquarius to continue its life-saving mission.

It is time that Europe #StandUpForHumanity.