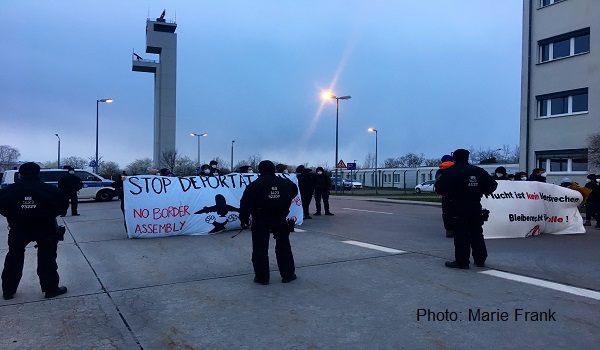 By Therese Lerchl, PRO ASYL. Therese is monitoring deportations to Afghanistan for PRO ASYL. As part of PRO ASYL’s legal counselling team, she is involved in individual cases.

Two decades of NATO mission in Afghanistan and the “western allies” are still far from achieving their objectives of defeating the Taliban and ensuring stability.  The US troops are leaving earlier than planned, with withdrawal possibly already finished by early July. The withdrawal of German forces was also hectically arranged and has started on the 1st of May. They are leaving behind chaos.

According to information of der Spiegel a delegation of the Federal Foreign Office and Federal Ministry of Defense were summarizing the results of a meeting in Kabul in a secret report of 20 pages. Their objective was to develop a variety of crisis scenarios including emergency and evacuation plans for German nationals. These also included possibilities like ‘a worst case scenario’ such as a storm on Kabul [by the Taliban]. Experts from the Afghanistan Analyst Network are anticipating a high risk for civilians with an end of armed conflict being the least probable outcome of US/allies withdrawal.

The security situation is already disastrous. According to the Afghan news portal Tolonews 141 attacks were conducted by the Taliban within just 24 hours in the beginning of May. More than 570 civilians were killed and another 1,210 wounded in the first three months of 2021. This marks a raise of 30 per cent compared to 2020. Particularly the number of women and children killed increased according to the UN-mission UNAMA and for the second year in a row Afghanistan ranked the most dangerous country in the world. Despite this alarming reality and prospects, well-known to German authorities, deportation planes are scheduled to take off for Afghanistan. In other words, incoherence and contradiction defines policies dictating the evacuation of German security forces and staff of political foundations from Afghanistan, while the Federal Ministry of the Interior continues deportation practices.

The last deportation from Germany to Afghanistan scheduled for the 4th of May 2021 was postponed at short notice. According to a spokeswoman of the Federal Ministry of the Interior this flight was not able to take off due to the Afghan authorities‘ implementation of stricter security measures between the 1st and 6th of May. The postponement can accordingly be read as yet another illustration of a tightened security situation in the country. However, the next charter deportation is scheduled for the 8th of June. This flight will be number 39 since Germany resumed deportations to Afghanistan in December 2016. Since then, 1,035 Afghan men have been returned. Women and families have not been subject of the deportations yet. Some of the 16 German federal states are prioritizing the return of persons with convictions or so called “Gefährder”, which is probably best translated as potential terrorists. However, such categories are in practice extremely broadly defined. Men who have committed minor offences as well as those who already served their sentence frequently are not granted a second chance in Germany and accordingly face deportation. In some federal states, especially Bavaria, all Afghan men regardless of their criminal record or work situation are potentially at risk of deportation.

Between April and November 2020 deportations were temporarily suspended because of the Covid-19 pandemic but resumed in December 2020. Public critique as well as legal intervention followed and with significant results. The Higher Administrative Court in Baden-Württemberg decided in second instance to broaden the scope and ban deportations of young and healthy men without family ties or other social network in Afghanistan. This ruling in line with the rulings of other regional courts argued that it is not possible for returnees to make a living for themselves due to the catastrophic economic deterioration which is an indirect consequence of the pandemic. Though not all courts followed the same line of argumentation this offered a ground-breaking guidance for jurisdiction across Germany. However, this so-called “national deportation ban” according to the German residence law is an individual protection status which can be granted in an asylum procedure and thus only applies to the concerned applicant and there is little political appetite for a general ban.

Consistent warnings by experts and human right organizations of the deteriorating security situation in Afghanistan continue to be ignored. Particularly the recognition practice of the Federal Office for Migration and Refugees remains inadequate. The proportion of cases corrected by court has been significant for years. In 2020, 60% of Afghan asylum seekers obtained a protection status after appealing against a rejection by the Federal Office for Migration and Refugees (2017: ca. 61 %, 2018: 58%, 2019: 48%).

Another group highly affected by the withdrawal is the local staff of German military forces, federal police, ministries and other institutions whose cooperation Germany  depended on in Afghanistan. The lives of interpreters, drivers and other support staff are at risk because Taliban regard them as traitors to their cause. Also staff contracted by development cooperation agencies like the Germany Development Agency and the German Development Bank is potentially threatened.

The Federal Minister of Defence  Annegret Kramp-Karrenbauer already declared that she perceives it “as a deep obligation of the Federal Republic of Germany not to leave these people unprotected now that we are leaving the country for good.”  The current plans are not sufficient though as they include only those who are currently employed or whose contract has not expired longer than two years ago. It is also intended to only allow members of the nuclear family (spouse and underage, unmarried children) to be taken into account – a narrow focus that does not correspond with  the Talibans’ interpretation of treason and therefore leaves members of the extended family at risk of persecution. The German embassy in Kabul has been closed since the attacks in May 2017, which is why it is planned to install application offices for local staff in Kabul and Mazar-i-Sharif. Time is running out, but concrete and effective measures are still missing.

In conclusion, the German government is at one and the same time pulling out of Afghanistan, leaving behind a deteriorated country and potentially the families of people who risked their life in its service, and disregarding the evident risks for people forcibly returned. This incoherence and lack of responsibility indeed defy all reason.