On the unfolding situation of refugees, asylum seekers and migrants sleeping rough in the streets of Brussels – Interview with Jolien Potemans Policy Officer at the Flemish Refugee Action who has been on location several times 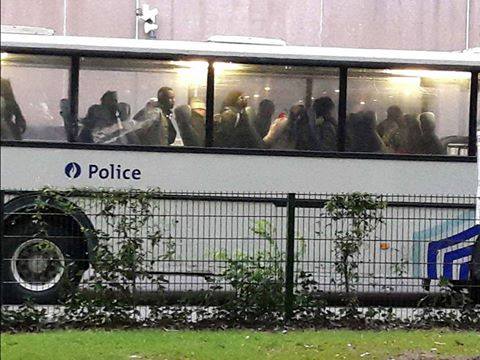 Informal refugee camps in cities – a (new) European reality? Reports of informal refugee camps and mounting police violence against the people inhabiting them are coming from all over Europe at the moment: Brussels, Paris and Rome. In an interview on the situation in Brussels, Jolien Potemans, Policy Officer at the Flemish Refugee Action, explains what is at stake for asylum seekers, refugees and migrants sleeping rough at the city’s Northern train station and how this problem is interlinked with national and European policies.

What is the current situation in Maximiliaanpark?

Over the summer there has been a growing number of migrants, asylum seekers and refugees sleeping rough in the Maximiliaanpark, which is close to the Northern train station in Brussels. At some point there have been up to 450 people in the area. In September the police started daily evacuation operations. Since then the situation has been extremely volatile.

As a result of police actions the number of people staying in the Maximiliaanpark has gone down tremendously. People have been dispersed all over the city and for a large percentage we simply do not have any information about where they have gone and what has happened to them.

What we know is that a high number of people have been detained following the police operations. The exact number of people put into immigration detention is not clear, but it is estimated to be around a hundred people. The Flemish Refugee Action is in the process of checking with the Immigration Office, how many people have been detained, how many of those detained fall under the Dublin procedure and how many have asked for asylum in Belgium.

Is this a new situation? How has the situation developed over the summer?

The informal camp in Maximiliaanpark was already established in 2015. But back then the situation was completely different and mostly linked to a backlog in the asylum registration.

What we see today, is a situation where many people lack access to information and do not know about their rights under the Belgium asylum procedures and are afraid of Belgian authorities. Others have been fingerprinted under Dublin, and others again, wish to leave to the UK or other European countries. Additionally, we see a number of unaccompanied children in the park.

Volunteers state that while the informal camp is not new  and became increasingly visible during this summer when the number of people in the park raised to about 450. Police actions as we see know, have been in place since the beginning of this month.

What are key concerns that the Flemish Refugee Action has regarding the situation?

Our main concern is that the current police controls will not solve the problem, but only contribute to the vulnerability of people. If the main aim of the actions is to convince people to ask for asylum: diminishing their trust in the Belgium authorities will not do much to achieve it.

Another key concern is the situation of unaccompanied minors. Not only is there a significant number of unaccompanied minors staying around the park, but also there are concerns that the best interest of the child is not taken into account when children are picked up by the police, as concerns are high that children are not referred to the special guardianship system in place for them. When sleeping rough, children and young people also find themselves in an especially vulnerable situation. The Flemish Refugee Action has been reported of one case of sexual exploitation.

Finally, there has also been a lot of controversy around the way the Belgian Secretary of State for Asylum and Migration has commented on the actions and situation in the park. In his last tweet he described the police actions using the term #opkuisen, which translates to “cleaning up”. Many have raised concerns over the use of this language and the Flemish Refugee Action shares these concerns, as communication on the issue should neither further dehumanize people, nor contribute to the legitimisation of dehumanizing conditions people are facing.

What changes does the Refugee Action advocate for on a national and European level in order to solve the current situation and prevent something like this from happening again?

We urge the Belgian government to deliver humanitarian aid and clear information on people’s rights and obligations. People should be offered reception, water, food and hygiene. We also ask for an immediate stop the police raids.

On a European level we advocate for respect of basic human rights. Worldwide more than 65 million people are forcibly displaced. Only a small friction manages to arrive in Europe. We advocate that the European Union at least takes its responsibility to establish a dignified standard of living for those that fled towards Europe. Member States should also fairly share responsibilities in order to do so.