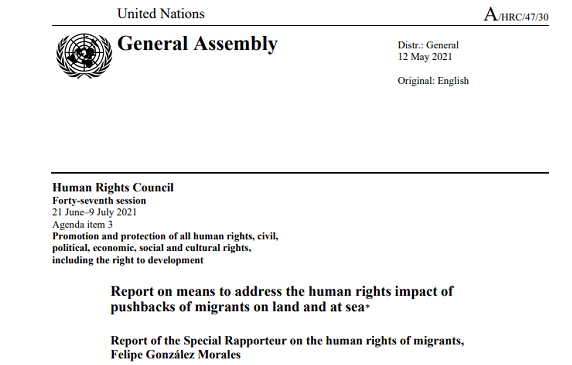 Last week, the UN Special Rapporteur on the human rights of migrants, Felipe González Morales, published his report to the Human Rights Council that is dedicated to addressing the human rights impact of pushbacks of migrants on land and at sea. The publication draws on various sources, including submissions by civil society and other stakeholders.

In the report, the Special Rapporteur uses the term ‘pushback’ to describe “various measures taken by States […] which result in migrants, including asylum seekers, being summarily forced back, without an individual assessment of their human rights protection needs, to the country or territory, or to sea, […] from where they attempted to cross or crossed an international border.” This can take place before an individual has entered a State’s territory or within the State’s territory. The Special Rapporteur highlights that pushbacks deny migrants their fundamental rights by depriving them of access to protection defined in international and national law, as well as procedural safeguards. In recent years pushbacks have been reported along most migration routes from all regions of the world experiencing mixed migratory movements.

The Special Rapporteur has received numerous submissions about pushbacks by the Greek authorities across land and sea borders sometimes reportedly carried out from urban areas and hosting facilities. One stakeholder reported of 321 pushbacks in the Aegean Sea involving 9,798 people between March and December 2020. Further, the increased militarization of the Evros land border has effectively resulted in preventing entry and in the summary and collective expulsion of tens of thousands of migrants and asylum seekers. Numerous violent pushbacks from Croatia, including from deep inside the territory and chain pushbacks have been reported, including 22,500 pushbacks from Croatia to Bosnia and Herzegovina recorded by one stakeholder between May 2019 and November 2020. Many more pushback incidents were reported, including from Algeria, Libya, Cyprus, Italy, Slovenia, Hungary, Spain, Malta. The use of force during pushback is of particular concern, the report states, and has resulted in serious injuries and deaths. Regarding the situation in the Mediterranean Sea, the report finds that “The continued cooperation of Italy with Libya and the Libyan Coast Guard has effectively resulted in the circumvention of the prohibition of refoulement and collective expulsion,” with more than 60,000 people returned to Libya since 2016.

Based on an examination of current global practices, the Special Rapporteur concludes that pushbacks are widespread, and in many contexts they have become a routine element of border governance, with a serious negative impact on the human rights of migrants. Therefore, the Special Rapporteur calls upon States to ensures that the human rights of migrants, including those in irregular situations, are always the first consideration and urges States to put an end to pushback practices, respect fully the prohibition of collective expulsion and uphold the principle of non-refoulement.