New Partnership Agreement between the EU and the Organisation of African, Caribbean and Pacific States (OACPS) published 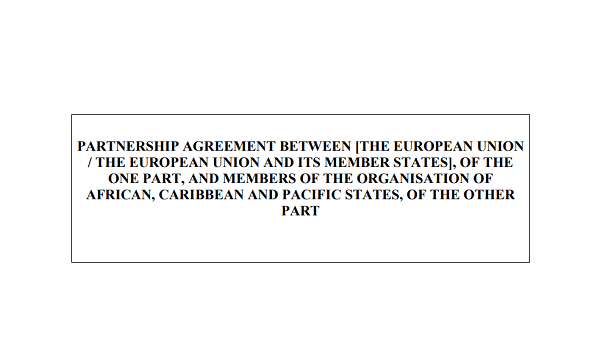 The new Partnership Agreement between the European Union (EU) and members of the Organisation of African, Caribbean and Pacific States (OACPS) replacing the Cotonou Agreement has been agreed and published. The agreement defines the political and economic cooperation framework between the two parties for the next twenty years.

The negotiations for the agreement have taken 2.5 years and were concluded with the chief negotiators, International Partnerships Commissioner Jutta Urpilainen, and Togo’s Foreign Minister Robert Dusse initialling the document.

The agreement includes a ‘common foundation”, which indicate the strategic priority areas that both sides intend to work on. These include: (i) Human Rights, Democracy, and Governance in People-Centred and Rights-Based Societies (ii) Peace and security, (iii) Human and social development, (iv) Environmental sustainability and climate change, (v) Inclusive sustainable economic growth and development, and (vi) Migration and mobility. In addition, three regional protocols for Africa, the Caribbean and the Pacific are included which place emphasis on particular issues and have their own governance structure to oversee relations between the EU and the relevant region.

The regional protocol for Africa adds to these commitments by specifying that both parties shall “engage in dialogue and cooperate on all aspects linked to legal and irregular migration, including by taking concrete measures”. Different articles are covering legal mobility and migration; intra African mobility; diaspora, remittances and sustainable development; irregular migration, smuggling of migrants and trafficking in persons; Return, readmission and reintegration; Protection and asylum. The chapter on migration, mobility and development in the Caribbean specific protocol is less detailed and includes only one articles which touches among other things on circular migration, diaspora, remittances.

The overall approach to migration is skewed towards readmission. In addition to specific provisions in the common foundation and the regional protocols, an Annex on return and readmission processes includes further details on how cooperation on readmission should take place. It includes detailed provisions on readmission of persons without a valid travel document, means of transport for return, return of unaccompanied children and clarifies that bilateral agreements between Member States of the EU and of the OACPS can be concluded. It further specifies that those bilateral agreements should include shorter time frames for response for the state to which a readmission request is made and that those agreements could also include the readmission of third country nationals. In addition, the Africa specific protocol includes the possibility of a Party to the agreement taking “proportionate measures” if another Party does not respect the time limit to respond to a readmission request.

The agreement will succeed the Cotonou Agreement once both sides complete their internal procedures for signature and conclusion. On the EU side, the approval by the Council of the European Union is required which will be provided after the European Parliament’s consent to the agreement is given.