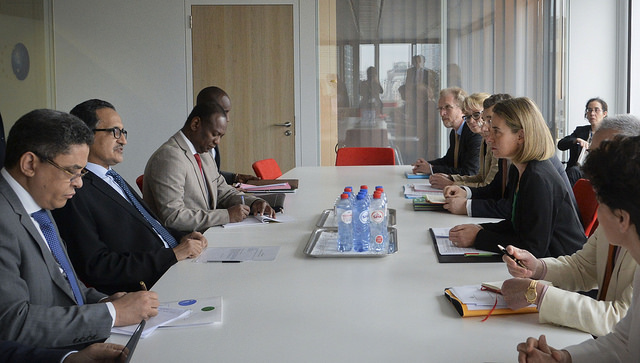 In the context of the High Level Conference on the Sahel, an international commitment of 414 million Euro’s was announced by the European Commission on February 23. The ambition of tackling root causes of instability and irregular migration resembles the focus areas of the EU Partnership with Sahel.

The announcement of funding confirms the willingness of EU and Member States to commit substantial economic and political investment in the Sahel region (Burkina Faso, Chad, Mali, Mauritania, Niger) including 8 billion Euro in development assistance (2014-2020), and 100 million Euro additional contribution to the Joint Force of the G5 Sahel.

The EU is already active in the region with three Common Security and Defence Policy missions in the region (EUCAP Sahel Niger, EUCAP Sahel, Mali, EUTM Mali) and 843 million Euro committed through the EU Emergency Trust Fund for Africa

From the EU-G5 Sahel strengthened partnership, created in 2014 to the Sahel Regional Action Plan (RAP), adopted in 2015, and to the German French led Alliance for the Sahel in 2017, migration management and security are constant and interlinked areas of focus.

“It is positive that Europe is increasing funding for the Sahel region where the needs are evident and urgent. However, it is vital that the focus is on the long-term development, with the SDG as the yardstick, and on the security of the people in the region. Focusing spending on prevention of migration to Europe doesn’t tackle root causes – and may even exacerbate them by disrupting local economic migration. There are multiple development, human security, and sector reform activities, run by local populations and authorities across the Sahel, in which the EU could invest,” says ECRE Secretary General Catherine Woollard.

The increased focus on security and migration control was criticized by Francesco Rocca, head of the International Federation of Red Cross and Red Crescent Societies (IFRC) after a recent visit to Niger meeting stranded migrants unable to reach Europe and unable to return home: “When we talk about European migration policies, it is only about security – how they are not allowed to enter – and not about the dignified manner in which you have to treat human beings,” he told the Thomson Reuters Foundation.

France is heavily engaged in Sahel and has 4000 troops in the region, is conducting asylum procedures in Niger as the first European country to do so on the African continent and a French draft law on immigration and asylum put forward by the Macron government on February 21 defines Niger as a safe third country.