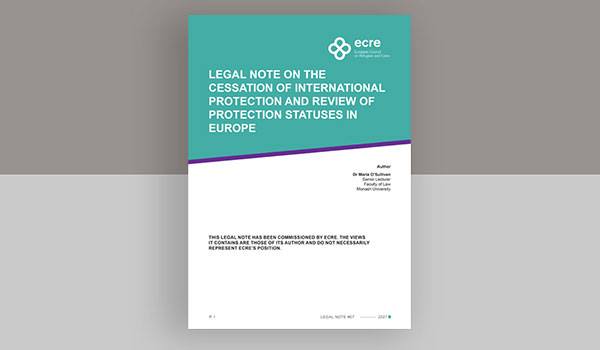 On 24 February 2021, ECRE published a legal note on the ‘Cessation of International Protection and Review of Protection Statuses in Europe’ authored by Dr Maria O’Sullivan, Senior Lecturer at Monash University, Faculty of Law.

The note sets out the legal obligations relating to cessation under international and EU law. It then examines the key decision of the CJEU in Abdulla and highlights developments subsequent to the Abdulla decision, including most recently the CJEU’s decision in OA.

The note focusses, inter alia, on six main legal issues which have been raised by national state practice of cessation in Europe. Firstly, it assesses whether the test for cessation is the ‘mirror image’ to that for recognition of refugee status and finds that, while Abdulla held that this to be the case, there has nevertheless been some divergence in the approach of national courts on the issue. Secondly, the note explores the standard of proof for cessation and notes slightly different approaches taken by European countries.

The note examines how the ‘compelling circumstances’ exception to cessation should be applied and examines national case law taking humanitarian considerations such as living standards into account in a cessation assessment. Finally the note considers how cessation interacts with non-refoulement principles in the ECHR.