Joint statement: One year after the country’s takeover by the Taliban – How did Europe welcome Afghans in need of protection? 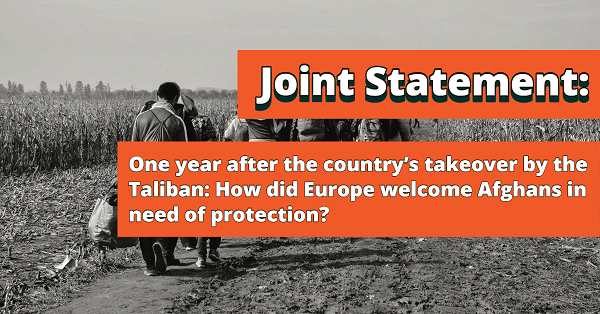 As civil society and Afghan diaspora organisations, we are deeply concerned about the deteriorating situation in Afghanistan and the treatment of Afghan asylum seekers and refugees in Europe.

One year after the Taliban takeover, the country is in a state of lawlessness without a constitution. The overall security, economic and human rights situation is deteriorating, and people’s suffering is increasing. Afghanistan’s economy has collapsed, and the country is confronting a dire humanitarian crisis, with 23 million people facing acute hunger. The general level of conflict has dropped compared to before August 2021 since the Taliban was a party to the conflict and has taken power, but the country is far from stable. Targeted killings and systematic attacks against religious and ethnic minorities, particularly against the Hazara community, revenge killings by the Taliban against former government officials and former military forces have significantly increased. Freedom of expression and movement of mainly women and girls has been severely restricted. Other rights are violated by measures taken by the Taliban, such as the ban on secondary school education for girls. Many human rights violations and incidents are going unreported in the absence of a vibrant civil society and due to the fear of Taliban persecution.

How did Europe respond since August 2021?

One year since the Taliban takeover of the country, and even though the majority of Afghan refugees are being hosted in the neighbouring countries, the efforts of European governments to provide protection in Europe have been too little and have come too late. Instead, efforts have been made to prevent Afghans from arriving in Europe and to reduce protection for Afghan asylum seekers despite their growing protection needs. Afghan asylum seekers are highly impacted by violence at the borders, pushbacks, and use of the ‘’safe third country clause’’. DRC’s PRAB initiative collected 1,911 cases of pushbacks at the EU’s borders; more than half of them were reported to be Afghan asylum seekers. Barriers also persist for those who are able to access the territory and request asylum as several European governments suspended the examination of Afghan asylum applications in August 2021. The number of pending cases concerning Afghan asylum seekers significantly increased to nearly 100,000 applications in April, as Eurostat data show. The overall first-instance recognition rates for Afghan asylum seekers keep falling in Europe, from 73% in April to 53% in May, according to the European Union Asylum Agency’s (EUAA) statistics, with the recognition rate greatly varying from one Member State (MS) to another MS without any credible reason for the differences to be discerned from the nature of the cases.

Due to the critical situation in the country, UNHCR urges all States to refrain from issuing any negative decisions or carrying out forced deportations to Afghanistan due to the deteriorating situation in the country. Despite this, several European countries are acting against the UNHCR recommendations, issuing negative decisions for Afghan asylum seekers solely because the violence level has decreased compared to the former situation while ignoring the dire humanitarian crisis, multiple reports of persecution, torture and widespread human rights violations.

These widespread rejections cause renewed suffering to Afghan asylum seekers, most of whom are vulnerable, including former unaccompanied children and teenagers, as it precludes them from accessing essential services.

The EU and its MS responses to displacement from Ukraine are commendable and applauded. However, they should not turn a blind eye to the situation in Afghanistan and the ongoing gaps in EU asylum and integration systems. Afghans who arrive in Europe need protection and solidarity in this time of crisis and hardship, and steps must be taken now to prevent the entrenchment of a two-tier system for refugee protection.

Shortly after Afghanistan’s collapse, the EU and its MS promised to continue evacuating their local staff and Afghans at risk; however, since then, too little effort has been made to evacuate them to Europe. With some exceptions, the majority of MS have now stopped the evacuation of their local staff and Afghans at risk. Whereas the EU’s MS committed to admitting 36,000 Afghans at risk through humanitarian admissions between 2021 and 2022, as of April 2022, only 28,700 of these places had been filled with the majority to Germany, mostly through evacuations surrendering the events in August 2021, including former local staff.

Thousands of local staff and Afghans are at risk are either stuck in Afghanistan or living in a precarious situation in the neighbouring countries. In the European countries where evacuation and humanitarian admission programmes continue, the evacuation process is very slow and non-transparent, with many bureaucratic obstacles remaining for Afghans to access these pathways and several schemes promised but not operating at scale yet. Moreover, the Taliban are not always cooperative in allowing people to cross the border. Recently Der Spiegel reported that the Taliban are blocking efforts by the German government to evacuate their former local staff and others at risk.

We call on European countries to continue evacuating their local staff and Afghans at risk in a coordinated and safe manner. In particular, it is vital that the EU collectively remains firm on ensuring that Afghans at risk can leave the country, which is one of the five benchmarks in their engagement with the Taliban. Following August 2021, many of the Afghans at risk, such as journalists and civil society activists, immediately fled to the neighbouring countries, mainly Iran and Pakistan; their situation should not be forgotten and should be considered under the humanitarian admission and resettlement schemes to Europe.

One year has passed, yet Europe failed to respond holistically to the crisis in Afghanistan. Little has been done to establish safe and regular routes for Afghans wishing to come to Europe, such as facilitating family reunification, establishing community sponsorship schemes allowing community members to host their extended family members and opening education and labour pathways, particularly for women whose education has been disrupted since August 2021.

CSOs recommendations to the EU and its MS:

European Council on Refugees and Exiles

Migrants Council of the city Potsdam

OPU – the Organisation For Aid to Refugees

Union of Afghan Associations in The Netherlands