Joint Statement: EU admits Croatia to Schengen Without Regard to Abuses at the Border 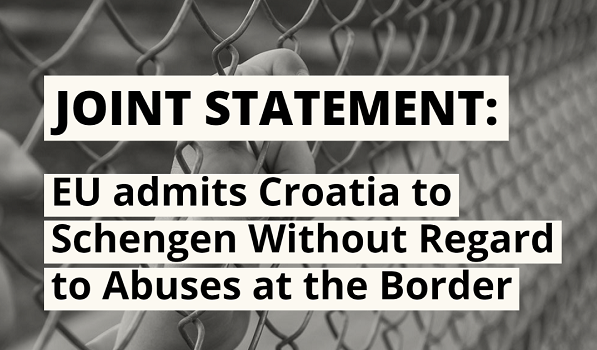 (Brussels, December 8, 2022) – The Decision on December 8, 2022, by the Council of the European Union to admit Croatia into the Schengen area despite substantiated reports of frequent breaches of EU and international human rights law by Croatian authorities and its border guards shows disregard for the EU’s commitment to fundamental rights, 8 leading human rights and humanitarian organizations said today.

Following past assessments by the Commission and the Council that Croatia had fulfilled the technical conditions to join Schengen, and the European Parliament’s positive recommendation in November, the Council’s decision does not come as a surprise, the groups said. Over the years, EU institutions have repeatedly turned a blind eye to overwhelming evidence of systemic human rights violations at EU external borders, including Croatia, and rewarded heavy-handed tactics that fortified borders and prevented people in search of protection from entering the EU at any cost.

By joining Schengen, the border control between Croatia and other EU members of Schengen, including Slovenia and Hungary, will be eliminated, aiming to enable free movement of people and goods. Border control will remain in place at the external borders of Croatia with Serbia, Montenegro, and Bosnia and Herzegovina. The Council’s decision to welcome Croatia to the Schengen club, despite known documented abuses, is a symptom of a higher EU policy imperative that repeatedly sacrifices fundamental rights for what is portrayed as border security. It sets a bad precedent for future Schengen enlargements and for the EU’s intention to enforce compliance with human rights standards inside the Schengen zone. What is unfolding at Croatia’s and other EU external borders is a rule of law crisis in which fundamental rights violations, including of the right to asylum, are met with widespread impunity.

The Schengen Borders Code, which Croatia committed to apply in its entirety, expressly requires member states to comply with international and EU law, including the Charter of Fundamental Rights, the Refugee Convention, and in particular an obligation to comply with the principle of non-refoulement – the practice of not forcing refugees or asylum seekers to return to a country where they would be at risk of being subjected to persecution – in the process of border control and management.

Yet human rights and humanitarian organizations have documented that Croatian authorities have consistently denied access to territory and asylum to refugees, asylum-seekers and migrants, and have engaged in collective expulsions, including violent pushbacks. Nongovernmental groups have documented on numerous occasions that Croatian police are using violence against helpless people – amounting to torture and ill-treatment – in violation of Article 3 of the European Convention on Human Rights, to which Croatia is a party. From early August to the end of November, a total of 1,395 people reported having been illegally pushed back from Croatia to Bosnia and Herzegovina, according to data collected as part of the Danish Refugee Council’s Protection Monitoring in Bosnia and Herzegovina. Each month, half of the victims reported that they were denied access to asylum during the pushback incident.

Despite substantiated and often irrefutable evidence that Croatia is violating EU rules, Croatian authorities have persistently failed to conduct timely, thorough, and independent investigations of reported police misconduct, and hold those responsible to account. The European Commission’s own progress report on Croatia’s implementation of the Schengen acquis, the rules governing access under EU law, cites human rights challenges. The Council of Europe Committee for Prevention of Torture noted that Croatia’s Interior Ministry dismisses nearly 90 percent of all complaints of police misconduct.

Other than meeting technical criteria, Croatia’s accession should have been conditional on the authorities ending border abuses, ensuring full accountability for unlawful practices, and establishing a credible and effective independent border monitoring mechanism. Now that Croatia’s access to Schengen is imminent without these conditions being fulfilled, the groups are calling for the focus to be on:

The European Commission announced in October 2019 that Croatia had fulfilled all technical criteria to join the Schengen area. In December 2021, the Council confirmed that Croatia had met the necessary conditions for the full application of Schengen rules. Finally, in November 2022, Members of the European Parliament by a large majority endorsed Croatia’s accession, while stressing that the human rights situation at Croatia’s borders should be continuously assessed. The European Parliament recommended the Council to adopt a final decision to lift border controls.