JHA Council: French Presidency to Push for Progress on Gradual Approach and agreement on the Schengen Borders Code 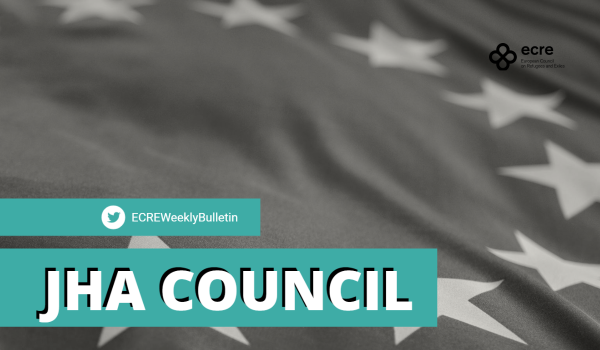 The Justice and Home Affairs (JHA) Council is meeting today. ECRE expects the French EU Presidency to attempt to make progress on the “gradual approach” to the reform of EU asylum law that it launched at the start of its six-month Presidency and conclude an agreement on the Schengen Borders Code.

On the agenda, is a declaration on a voluntary solidarity mechanism on which a political agreement of the Member States is sought. The mechanism would be one element of a deal constituting the first step in the gradual approach. In exchange for the solidarity mechanism, which is intended to benefit the countries at the external border, the French Presidency wants an agreement on a negotiating position or general approach for the Council on two of the many legislative proposals on the table – the Screening Regulation and the Eurodac Regulation.

Barring a last-minute addition, the Screening and Eurodac files are not on the agenda of today’s meeting, however, with the French Presidency working in bilateral and small group discussions before presenting a proposal to full Council. It is expected that these two files will return to the agenda for the final JHA Council meeting in June because the French hope for a decision before they hand the Presidency to the Czech Republic which is expected to be less active.

The voluntary solidarity mechanism will apply immediately if the declaration is passed today by the Council, however it will not start functioning until agreement is reached on the negotiating position or general approach to the Screening and Eurodac regulations. The mechanism prioritises relocation but also includes financial contributions to solidarity. At the insistence of certain Member States, it is voluntary in nature. It would also temporary – to operate for one year – and it is not based on a legislative act. The French Presidency has suggested that, as such, it should be viewed as a “precursor” for the permanent solidarity mechanisms provided for in the Pact on Migration and Asylum which are still under discussion.

The solidarity mechanism is intended to benefit, primarily, the EU Member States at the EU’s southern external border, which have long complained about the lack of solidarity they experience when faced with arrivals of people seeking protection, combined with what they perceive of as the unfair rules on the responsibilities of countries of first entry in the Dublin Regulation. Doubts remain, especially given the different legal statuses of the solidarity mechanism, on one side, and the Screening and Eurodac regulations (as pieces of legislation), on the other.

A second item on the agenda of the JHA today is the reform of the Schengen Borders Code (SBC), also a priority for the French Presidency. The European Commission proposed a set of amendments in December 2021 which have been debated by the Schengen area countries over the last six months. The Presidency has produced various compromise texts seeking to reconcile the different positions of the Member States on the proposed amendments. On Wednesday, the Member States’ Ambassadors met to hash out an agreement and the French hope that a general approach – a common position of the Council – will be concluded today.

The SBC amendments are separate but linked to the Pact, and the other legislative proposals for asylum reform, given that they include the concept of “instrumentalisation” and measures that will have an impact on access to asylum, such as limiting border crossing points.