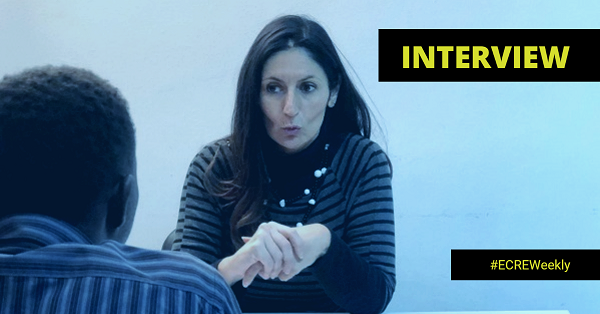 Maria Chiara Monti is a psychologist and group psychotherapist as well as the President of Centro Penc Antropologia e Psicologia Geoclinica. Centro Penc is a non-for-profit organisation that provides mental health and psycho-social support to people with a migration background in a situation of vulnerability in Sicily, including survivors of violence and torture and people fleeing war. Centro Penc follows the ethnopsychology approach, which keeps the culture of origin of the people with whom they engage at the centre of interventions. For the last three years, under the EU-funded EPSUM project, Centro Penc has worked with SOS Children’s Villages, Save the Children, War Child Holland and Refugees Welcome to strengthen the Mental Health and Psychosocial Support received by children in migration in Italy, Sweden and Greece. For further information, register here to follow EPSUM’s online conference on 15 December.

Having to rely on extremely dangerous routes to arrive in Europe is devastating for children. The experiences young people arriving in Sicily have gone through during their transit through Libya have an extremely negative impact on their mental health and therefore all aspects of their lives, including their inclusion in school, in the job market and their participation as citizens. The boys often tell of experiences of imprisonment, during which they are deprived of food, beaten, sexually abused, exploited in extreme conditions, and other forms of ill-treatment and torture. Some have fled their countries because they are orphans, some have been kidnapped and sold by human traffickers.

Many of the children and young people we work with are also dealing with shipwreck trauma. They have survived but they might have remained in the water holding to fragments of a boat for many hours, desperately, waiting for help, witnessing the drowning and death of loved ones, friends, relatives, traveling companions.

The have had to contract debts in order to undertake these journeys. The responsibility placed upon them to pay back their debts and to improve the economic situation of their family who remained behind is a source of extreme anguish.

All these aspects add up to the enormous difficulties that young people encounter in Italy due to the bureaucratic delays and obstacles to receiving a work permit, which for some will remain out of reach. Without the ability to earn an income within the system, some young people leave the reception centres and continue their journey. Some, boys and girls, will turn to prostitution, to be able to generate some income to support their families back home.

You have worked for more than 13 years with refugee children arriving in Sicily. How has the situation for the children you meet in Sicily evolved?

When I started working as a clinical psychologist in the field of ethnopsychology in 2008, I worked mainly with people of a migrant background being born in Italy or with people born abroad but who had lived in Italy for many years. Between 2011 and 2013, in the so-called “Arab Spring” period, larger numbers of refugees and survivors of extreme violence, prisoners in Libya for many years, victims of torture, began to arrive in Sicily. Among them, young boys and girls arrived with their families or alone via the Mediterranean route, and I started focusing on the relationship between mental health, ethnopsychology and torture.

During these years, the protection that children arriving in Sicily receive has improved. The reception system (Reception and Integration System, SAI in Italian) guarantees now greater rights for children. The teams working with children in the SAI include now specialized personnel (psychologists, social workers and cultural mediators), who are often asked to attend training courses also on mental health issues.

Furthermore, a new law passed in 2017 (law 47/2017, ‘Zampa law’) brought about greater protection for unaccompanied children. In particular, it introduced voluntary guardians and greater attention to the psychological vulnerability of younger children. This law also improved the way age assessments are carried out. It questioned the previously widespread use of Rx examination of the wrist and left hand, which had an unreliable outcome and was implemented without the consent of the child or young person, and introduced a holistic age assessment procedure including the active participation of the child in the assessment process.

On the other hand, children arriving without their families in Sicily are younger and younger. We see now children as young as 12 years old arriving on their own. They are extremely vulnerable and at high risk of being lured into trafficking. Also, trauma at such a young age settles at deeper levels with very serious mental health outcomes.

What measures you think would have the most significant positive impact in the mental health and wellbeing of children and young people arriving in Sicily?

In the area of mental health, initiatives such as EPSUM that are integrated within and strengthen the Mental Health and Psychosocial services available locally by facilitating the identification of referral of children to the support they need are a step in the right direction. However, more systematic investments should be made in order to make mental health services truly more accessible. In particular, survivors of violence and torture with a migration background, should be able to benefit from psychotherapy services that follow an adequate methodology. Also, the systematic presence of cultural mediation is still not widespread in care services, relying instead on occasional projects.

Young people should also be able to allowed to work and access independent housing more quickly, in order to be able to leave the reception system and integrate in the local community.

Today, boys and girls spend a lot of time in the reception system even when they could enter the labour market having, for example, obtained a residence permit. This seems to be the result of a generalized idea that mastering the Italian language is essential for integrating in society. In Italy, third country national and stateless persons who want to obtain a long-term EU residence permit, with unlimited duration, must have been regularly and continuously residing in Italy for at least five years and they must pass an Italian language test. Skills and knowledge of so-called vehicular languages, such as French, English, Portuguese and Arabic, are not taken into consideration, despite the strong lack of knowledge of these languages in our country.

From the moment of arrival in our country, and through all the steps towards inclusion, the languages spoken by these children should be valued to reverse the representation of the relationship between “who must learn” and “who must teach”, “who knows” and “who doesn’t know”. Starting the path of inclusion through valuing the language of the “Other” could be a way to restore dignity to those who have lost it during the journey.

Finally, for someone who treats the damage caused by the violence these children and young people have faced in their countries and trying to navigate the barriers Europe has erected to prevent them from getting here, the biggest wish would be that they would be able to reach safety without having to go through these devasting experiences. We can do more not only to help them heal but above all to stop causing all these wounds.

What do you find most inspiring in your job?

In my work I find great inspiration in the fact that every person with whom I start a psychotherapy journey allows me to enter their fascinating cultural world, made up on one hand of violence and pain, but also richness, rituals, traditions. The story of the worlds of origin, session after session, week after week, is the way to heal the wounds left by the violence and losses caused by wars and all the obstacles designed to make it as hard as possible for people to arrive in Europe.