Interview: Stranded at Sea – Observations from the Deck of the Sea-Watch 3 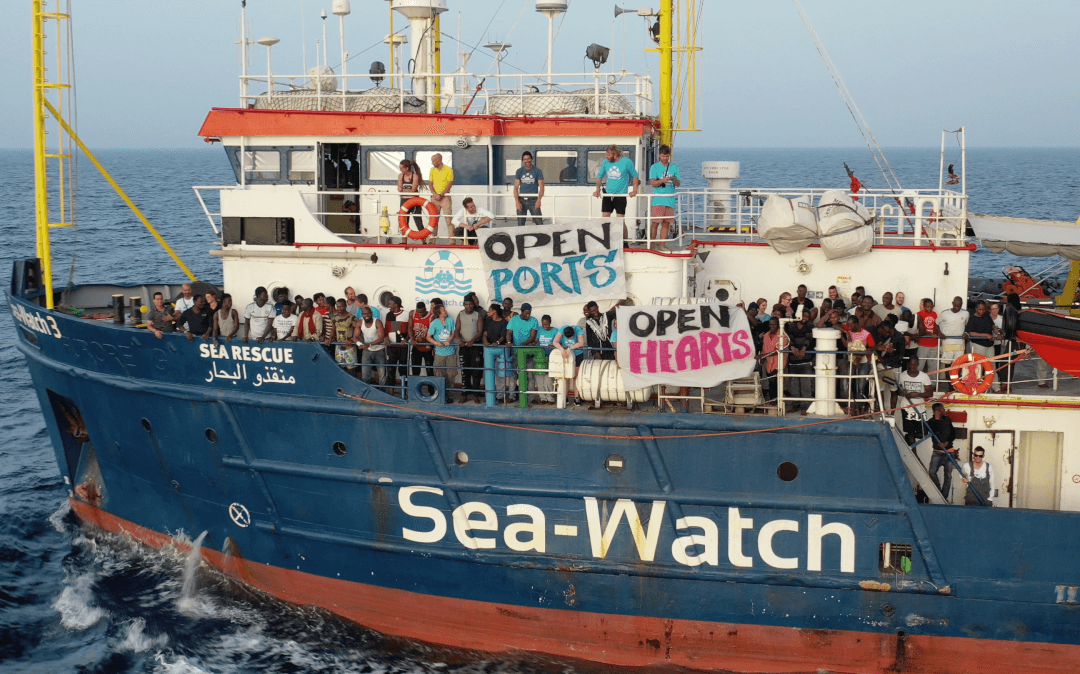 Interview with Oscar, law student and crew member on the civilian rescue vessel Sea-Watch 3, operated by the NGO Sea Watch.

You are a currently one of the speed boat drivers on the Sea-Watch 3, which rescued 53 people off the coast off Libya last week and is currently looking for a safe port to disembark. Italian Interior Minister Mateo Salvini said, the ship should dock in Tripoli, Libya, the nearest ”safe” port. Can you give us an overview of the timeline of events since you rescued the group?

Last Wednesday, we rescued 53 people from a rubber boat in international waters, 47 nautical miles away from Libya. The Libyan Joint Rescue Coordination Centre, which we consider incompetent, offered us a safe port in Tripoli in emails sent via an Italian server. But our captain disregarded this request, as we cannot consider Tripoli as a safe port for the people we rescued. The closest port of safety in our case was Lampedusa, so we sailed north to demand a port of safety in Italy. The Italian authorities refused to provide one, but agreed to disembark ten vulnerable persons outside of territorial waters, amongst them two babies with their parents and some urgent medical cases. Later, in the middle of the night the authorities came on board to personally hand over the new decree of Salvini, which we consider unlawful, to our captain. The decree means that we could be fined up to 50 000 EUR for entering Italian waters.

Italy referred our demand to our flag state the Netherlands but they too, like so many other states, refused to take responsibility even though this situation demands a common European solution. Instead they point the finger at each other and claim not to be responsible, at the expense of those rescued. Ever since, we are stranded in front of Lampedusa. In the meanwhile, our support office on shore is working hard to find a solution and exhaust all possible legal remedies against an unlawful decree, which was only put in place last week with the sole purpose of keeping out people rescued at Europe’s external borders as part of a wider deadly migration policy of Europe.

What is the state of people on board and what are the main challenges you are facing?

The people on board are severely traumatised. There is one word our guests use to describe Libya: Hell! All of them went through it and what they experienced is unbelievable. But not only in Libya. Many of them are fleeing war and conflicts in their home countries. For the first time in a long time, they can have a break and feel safe on our vessel and get as much care as possible from our crew. But at the same time they are trapped again and desperate given the refusal to disembark, which can easily overpower the feeling of safety. So the main challenge for us is to keep up the mood, which is constantly at its tipping point.

How are crew members impacted by the threat of being criminalised by Italian authorities, for example through Salvini’s latest decree?

The decree is of great concern for the crew members as we are the first vessel facing its consequences and do not know for certain what might happen to the ship and the crew beside the fines imposed. Regarding past developments for sea rescue in the Med we are aware of the fact that the organisation and individual crew members might face a criminal investigation once we have disembarked the people. But at the same time we are well prepared for this scenario and ready to fight for human rights principles and proof that we acted in accordance with international law. On the other hand, we are deeply concerned about the future of search and rescue in the Med as this decree prevents other vessels in the area of engaging in rescue operations.

How has the crackdown on a civilian search and rescue operations impacted the security of people crossing the Mediterranean?

By supporting a hostile environment for NGOs and at the same time withdrawing rescue operations in the Med like Sophia and Triton the EU rolled out a carpet of silence over the Med. It became difficult to report about the situation there, no eyes, no news, no more concerns and not our business anymore. But people are still trying to flee from Libya and many are still drowning in their attempt to do so. So the answer to this question is clear: it became way more dangerous!

Even merchant ships are avoiding this area as they are aware of the struggle to disembark rescued people later on. It became acceptable to turn a blind eye to distress cases although there exists a legal duty to rescue people in distress. Instead, the EU funds and cooperates with the so-called Libyan Coastguard, which is not equipped and trained to conduct mass rescue operations and is known for gross human rights violations. The result is that more people are dying but also fewer are arriving at European shores. For the EU, only the latter counts.

More than 50 German cities have declared their willingness to take in the people rescued by the Sea-Watch 3. Do you see a prospect for this engagement of civil society merging with national and EU-level policy?

According to the German constitution the federal government is in charge of deciding to take in people, and more specifically, the ministry of the interior. Changing this would require a constitutional change, unlikely to happen soon. Nevertheless, I think civil society engagement is a crucial tool to keep attention on the situation in the Med and to pressure our government to act.