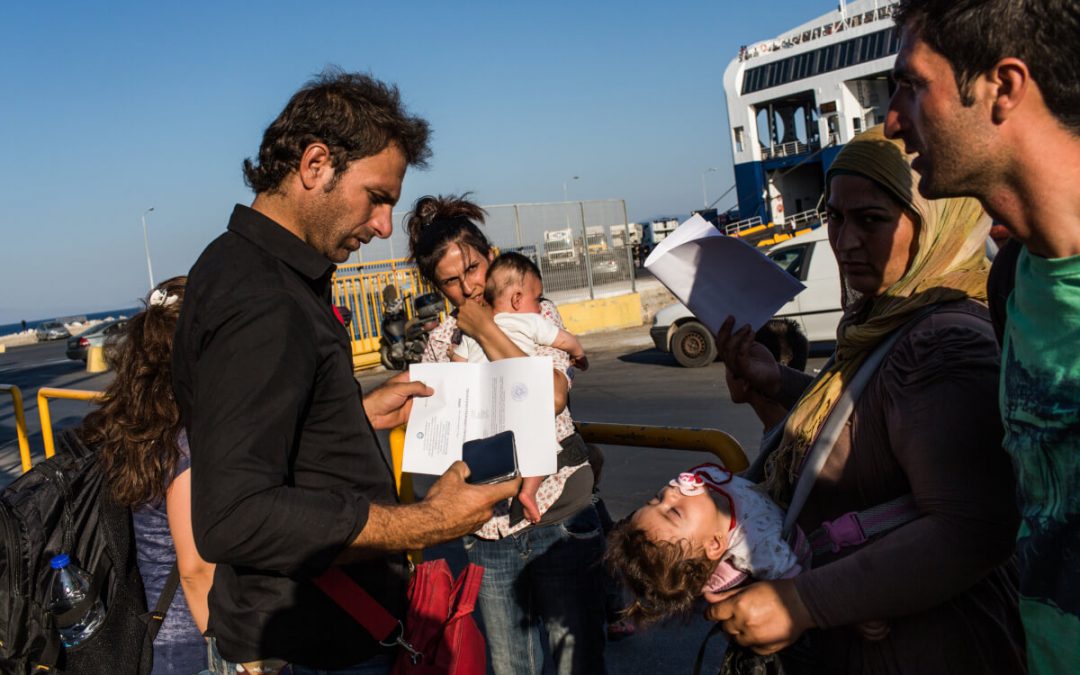 Nina Murry is Head of Policy and Research at the European Network on Statelessness (ENS). Laura van Waas is Co-director of the Institute on Statelessness and Inclusion (ISI). In 2017, the two organisations started the #StatelessJourneys project to examine the relationship between statelessness and forced displacement in Europe.

The issue of statelessness is often overlooked in the debate on asylum. What is the number of people impacted?

NINA: Statelessness is a legal anomaly affecting more than half a million people in Europe, and more than 10 million globally. Thousands of refugees arriving and living in Europe today are stateless, but because countries lack law and policy to address statelessness, nationality problems are often hidden and overlooked.

What are the main challenges facing stateless refugees arriving to Europe?

NINA: One of the main issues is the invisibility of statelessness. To protect the specific rights of refugees and migrants who are stateless (or at risk of statelessness), nationality problems have to be identified and dealt with. But, in practice, this rarely happens. There is no standard procedure to identify and register statelessness on arrival at the border and officials responsible don’t have access to training and guidance. Stateless people are often simply ‘assigned’ a nationality during screening procedures based on their country of origin or the language they speak or registered with an ‘unknown nationality’. This can obviously cause lots of difficulties further down the line for them. It also hides the scale of the problem because data we have is inaccurate.

Problems with identification are compounded by the fact that many European countries don’t have dedicated legal frameworks in place to determine statelessness and grant stateless people protection under the 1954 UN Convention on statelessness. This means that if a stateless person is refused refugee protection, they can end up in a vicious cycle of repeated return attempts and prolonged detention, unable to regularise their stay but with nowhere to go because no country will accept them.

There are many common State failures surrounding the birth of a child to a refugee in Europe (or in transit). For example, the inaccurate identification and registration of parental nationality, means that States can either be unaware or outright refuse to accept that a child may be born stateless on their territory. A child may be recorded as having the same nationality as their parent with no investigation into whether the parent can confer their nationality. Yet we know that countries like Syria do not allow mothers to pass on nationality. So in cases where the father is not known, does not recognise the child or is unable to confer his nationality the child will be stateless. The nationality laws of numerous other major countries of origin discriminate against women in the same way, including Iraq, Iran and Somalia. The bureaucracy surrounding the systems in place for birth registration can also act as a barrier, with overcomplicated and strict evidentiary requirements, punitive fines and court procedures.

Why is statelessness relevant to authorities and actors working with refugees and what can be done?

NINA: We know that European countries and refugee response actors are increasingly encountering stateless people in their asylum systems. And we know that the fact that an asylum applicant may be stateless can be critical when assessing their claim for international protection. The fear of persecution of a Kuwaiti bidoon at the hands of the Kuwaiti authorities might be directly connected to their statelessness. The same could be said of a stateless Rohingya from Myanmar. Whether someone is stateless or a national of their country of origin not only impacts on the initial assessment of their claim, but also on the nationality rights of their children, access to family reunion, integration and naturalisation, because they are unlikely to have documentary proof of identity and family links.

LAURA: We started to more carefully document the relationship between statelessness and forced displacement in Europe. It is true that existing country of origin information relating to refugee populations in Europe today is not tailored to address statelessness as a specific phenomenon in the asylum context. This information and knowledge gap is making it difficult for refugee actors to take statelessness-specific issues into account in their work. Our ‘Country Position Papers’ aim to provide information on the profiles of stateless individuals and people who may be at risk of statelessness due to nationality or civil documentation problems.

Take Myanmar, for example. It is home to almost half a million stateless Rohingya, with many more already displaced from their country by violence and persecution. This is the country’s most widely known and largest stateless population. But it is not the only one. In fact, Myanmar’s problematic Citizenship Law discriminates on the grounds of race and ethnicity and lacks safeguards to prevent statelessness. Coupled with widespread corruption in civil documentation processes, this has generated a severe statelessness crisis affecting many other vulnerable populations in the country. We’ve put this information in our Country Position Paper on Myanmar. Position papers on statelessness in Syria, Iran, Iraq, Kuwait and Palestine will soon be available. We hope that these position papers will be used in helping to ensure a more statelessness-sensitive approach to assisting refugees and migrants. In the long term we are advocating for a greater focus on nationality problems and statelessness in Country of Origin Information prepared by other actors.

What is the change that needs to happen? Who needs to be involved and what do they need to do to make sure that stateless refugees are protected?

LAURA: Change is needed at different levels. Authorities need to put in place legislation and policy procedures to regulate and guide the response to stateless people arriving in Europe and ensure that States can meet their international obligations. To name a few practical examples. Firstly, States need to develop guidance to assist frontline officials to accurately identify statelessness during nationality screening procedures. Secondly, all States need to have a statelessness determination procedures, so that people identified as – or claiming to be – stateless can then be referred to a legal procedure to determine their nationality status and receive protection. This is especially important where they don’t qualify as refugees or for other forms of subsidiary protection. Thirdly, there needs to be a procedure for reviewing and correcting errors in the recording of nationality status and people need to be signposted to specialist support and legal advice. Fourthly, training, capacity-building and information should be provided to registry officials so they are better equipped to respond to the specific circumstances of stateless parents.

NINA: And at a more basic level, anyone who encounters a stateless refugee or migrant in their work should feel empowered to respond appropriately to that person’s specific situation. So, for example, frontline response officials should have a basic understanding of who might be affected, how to ask someone about their nationality status, how to record an accurate answer, and where to refer people to for assistance. NGOs, lawyers and volunteers should also have access to information, resources and training to build a basic awareness of statelessness and nationality problems and how to support people affected. Stateless individuals and communities should have access to information about their rights and how to find specialist support in formats that are accessible to them.

The #Statelessjourneys project is designed to support those objectives.