Interview on the European Summit of Refugees and Migrants: “We Thought that Europeans Should Hear from Us” 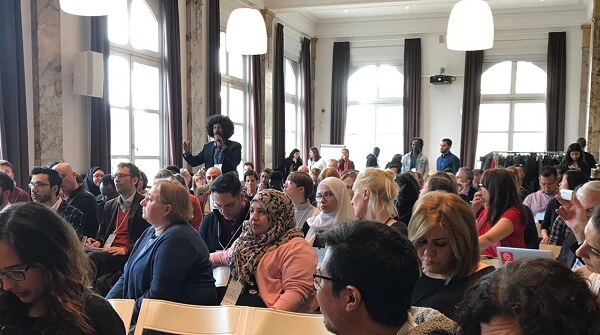 An Interview with Ula Al-Khateeb from Syria, an Education specialist and member of Diaspora Network Alliances (DNA) who migrated to Spain. She participated in the European Summit of Refugees and Migrants as a co-facilitator of the education group.

On 4-6 May, over 60 refugee and migrant representatives from the 28 EU Member States gathered in Brussels for the first European Summit of Refugees and Migrants. After two days of working together to develop policy proposals, they were joined by over 40 delegates from INGOs, private sector, academia, EU institutions, UNHCR and foundations to discuss and exchange views on key issues including civic engagement, health & wellbeing, education, protection, agency & participation.

The European Summit of Refugees and Migrants in Brussels was designed to ensure the inclusion of the experience and perspectives of the people most directly affected by the asylum and migration policies at EU and member state level in the debate – people with a refugee background. Could you tell us how you see the current representation of people with refugee background in the political debate?

The Summit brought together a diverse group of advocates, organisations and stake-holders – could you give us your impression on the challenge and potential of finding a consensus and mutual understanding?

As a co-facilitator of the education group, we were able to compile a comprehensive list of the educational obstacles from all the EU countries represented. We heard the same major obstacles repeated across many countries regarding the laws or processes related to education that hinder the integration and access to higher education, homologation of certificates from home countries, or lack of right information at the right time. Add to this many comments about the orientation services provided for refugees, i.e. many participants commented they have a sense that refugees and asylum seekers are being pushed to take the route of vocational training and quick courses instead of university degrees.

With regard to potential solutions, we developed some solutions and approaches that worked out in some countries, and it would be of benefit to duplicate in other countries. We developed also some innovative ideas to enhance access to education and later we discussed these recommendations with the stakeholders such as NGOs, universities, and the private sector.

What kind of conclusions were reached at the summit in terms of work-plan, strategy and structure of your cooperation and where do you go from here?

Our team outlined a work plan to overcome each obstacle and specified the pledges and commitments we need from stakeholders to have our small dreams fulfilled. The stakeholders and experts gave us their feedback and enriched the conversations, and we are aspiring to put words into actions. Moreover, during the summit, we elected four migrant/refugee advocates to represent the recently launched European Coalition for advocacy in the coming two years. We have shaped some collective pledges with the different stakeholders to improve the refugee response. These pledges will feed into the Global Refugee Forum that will be organized later this year in Geneva by UNHCR.

Who were the people and organisations involved in the summit?

The European Summit of Refugees and Migrants was convened and organized by representatives of five refugee-led and migrant-led organizations, including the Global Refugee-Led Network (GRN), New Women Connectors, the Syrian Volunteers in the Netherlands (SYVNL), the Diaspora Networks Alliances (DNA) and the G-100 Initiative. Support was provided by a coalition of partners including the NGO Independent Diplomat (ID), the Dutch Refugee Council, the Danish Refugee Council, Oxfam, the Open Society Foundations (OSF) and the European Programme on Integration and Migration (EPIM).