Interview: #HardlyRocketScience – the People who Made it Happen: Coco from Yalta Club and Kaleido Ray 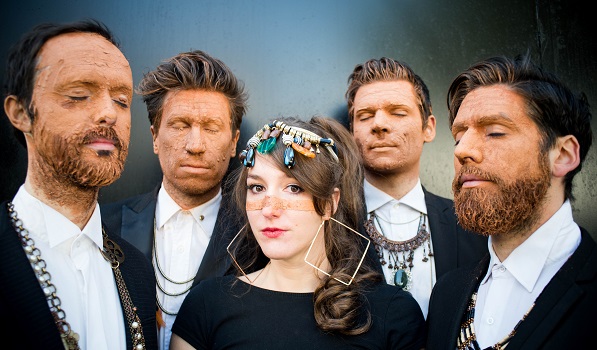 Artists, performers and videographers have invested their skills and creativity in the rights of people seeking protection in Europe. They joined the call of ECRE’s #HardlyRocketScience campaign to make sure European politicians would respect fundamental human rights when negotiating the European Pact on Asylum and Migration – we asked them why…

Background of the artist

Coco is a musician, composer and performer in the French-German indie pop band Yalta Club. When the band met in 2012, the immediate chemistry was undeniable. Yalta is travelling, politics and the beach rolled into one place, and Club is the team, the family. Since then, Yalta Club toured all over Europe (and Mexico) with more than 300 shows and released their second Album Hybris in 2017. A dense and melancholic initiation journey in the form of triptych: Defeat, Drift, Resist. Yalta Club’s songs oscillate between these three contradictory, yet compatible, feelings, witnesses to a band in full human and artistic evolution. These questions, which are inseparable from Yalta Club’s music, are reflected in the personal commitments of its members.

With her solo project, Coco recently composed and recorded an album with Berlin-based producer MissinCat in Berlin that is to be released in 2021.

What is your main motivation as an artist?

I compose and write music because I firmly believe that music unites people from all over the world. And: I just love doing it! 🙂 With Yalta Club and also in my solo project, I always try to write about things that move me and the people around me. I hope that I can reach and touch people with my music. I also believe that music can have an important power in the political context: it unites, it raises awareness and it emotionally connects people, no matter what they believe in.

How do you see the situation for people in need of protection in 2020?

To be honest, I just can’t believe what is happening right now. We’re in 2020, in Europe. People need protection and we turn our backs? Is that what Europe stands for? Why do people discuss whether it is okay to let people drown in the Mediterranean Sea? Why do people discuss whether Europe should grant people protection? For me, these discussions and hiding behind the “we need a European solution” is just unbearable. Of course, we need a long-term solution, but it is a humanitarian obligation to help right now and a human rights obligation to find a solution. So, to answer your question… how do I see the situation for people in need of protection in 2020? It sucks, I’m sad and I’m angry. And I hope that people will start to remember that Europe is supposed to be a place of freedom and human rights. And act like it. Now.

Why did you decide to support the #HardlyRocketScience Campaign?

I studied human rights, international relations and have been working on the promotion and protection of human rights since I can remember. For example, I am a member of SOS MEDITERANEE and I founded an integrative project in Lüneburg, Northern Germany, called mosaique – Haus der Kulturen. So, it’s a topic that has been a part of me for a long time. I am very happy to be a part of the #HardlyRocketScience Campaign, because it allows me to combine music with a real cause that might raise even more awareness for the problems linked to the migration pact. I just believe that we all have to contribute wherever we can to make the situation at least a bit better: stand up for humanity and show an example of a great collaborative process with people from all over the world.

Learn more about the artist: