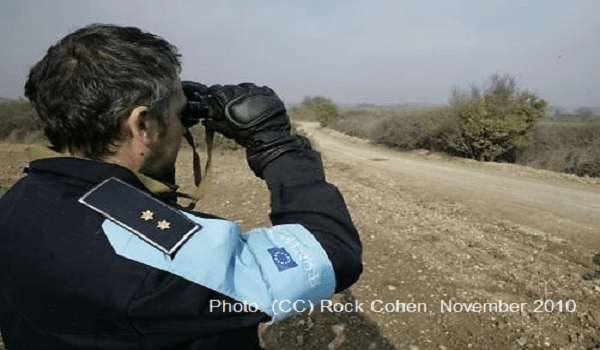 The European Commission has called for an extraordinary Frontex Management Board meeting on 10 November, as a reaction to reports of complicity of the European Border and Coast Guard Agency (Frontex) in illegal pushback operations. The Agency has further come under scrutiny for investing 100 million Euro in drone surveillance over the Mediterranean.

A joint investigation by Bellingcat, Lighthouse Reports, Der Spiegel, ARD and TV Asahi: “suggests Frontex assets were actively involved in one pushback incident at the Greek-Turkish maritime border in the Aegean Sea, were present at another and have been in the vicinity of four more since March”. According to Bellingcat the research “identify multiple instances in which Frontex was either present at pushbacks, or close enough to be able to understand what was taking place. In at least one incident it appears that a Frontex vessel actively participated in a pushback. It is possible that there are other incidents we have not been able to capture”. The reports are based on tracking the positions of Frontex units, interviews with witnesses including refugees and Frontex staff, as well as the review of internal documents, video material and satellite photos.

EU Home Affairs Commissioner Ylva Johansson stated in an interview that any Frontex involvement in pushbacks is unacceptable and confirmed that she, upon hearing about the allegations, immediately requested an investigation by Frontex Director Fabrice Leggeri, which the Agency confirmed in a press release on 27 October. However, the procedural details, the persons involved and the timing remain unclear. Commissioner Ylva Johansson further stated on 28 October that she in coordination with Commission President Ursula von der Leyen has requested: “to convene an urgent extraordinary Frontex Management Board meeting on 10 November, to discuss alleged push-back incidents in Greece and fundamental rights protection.” The European Commission has two seats on the Frontex board otherwise which otherwise consists of member state representatives.

Frontex which has seen a growth in its budget from 142 million Euro in 2015 to 460 million Euro in 2020, has come under scrutiny for granting 100 million Euro in contracts for Airbus and Israeli weapons company Elbit Systems for drone surveillance technology over the Mediterranean Sea. Wim Zwijnenburg, from the Dutch peace organisation Pax, called out what he defined as a “technology fetish” by EU policy makers concluding: “We have all these eyes in the sky, but we don’t have hands on the sea,” referring to lack of rescue capacity. “European actors are trying to withdraw their presence in the sea and, we would argue, to not abide by their duties,” said Kiri Santer from the NGO hotline Alarmphone, adding: “They continue to be present but from the air, so they can be aware of different migrant boats leaving from the Libyan shores and feed that information to the Libyan coastguard”.

The Aegean Boat Report documents the pushback of almost 200 people by the Greek coastguard on 20 October in the largest such operation recorded by the NGO.  A total of 232 people allegedly pushed back from Greece were rescued by the Turkish coastguard in three separate operations on 23 October.