France: 2 Years After the Demolition of ‘The Jungle’, Camp Clearances Continue 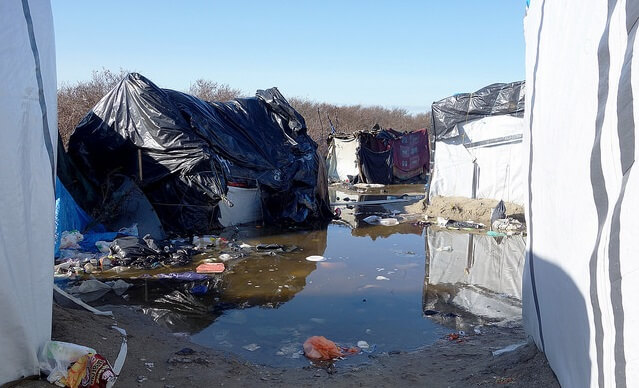 French police have cleared a make- shift camp of 1,800 refugees and migrants in Grande-Synthe, near Dunkirk. The clearing of the camp was part of an eviction order issued by the Dunkerque court on October 11 at the request of the town hall. The regional prefect’s office said the operation is aimed at giving vulnerable families shelter and preventing people-trafficking, a problem they say they are committed to eradicating.

Since the dismantling of the Calais ‘Jungle’ in late 2016, Grande-Synthe has become a settling place for refugees and asylum seekers, many of whom were on their way to try to seek safety in the UK. Police have intervened several times since to forcibly remove people from the camp, following a statement in January by French President Emmanuel Macron, in which he stated that France will not tolerate a new ‘Jungle’ or the occupation of public spaces. The local prefecture in Grand-Synthe said that migrants cleared from the camp will be sent to reception centers in northern France where authorities will assess whether they intend to seek asylum.

In April 2017, a fire broke out destroying the wooden huts that had been built in the camp by Médecins Sans Frontières (MSF), the Grande-Synthe municipality and various partner organisations, which at the time were home to at least 1500 refugees. Since the fire, authorities have refused to rebuild the camp, however people continued to arrive, living in tents and makeshift shelters.

This week marks two years since the destruction of the Jungle camp in Calais, where at least 6000-8000 refugees and migrants had found shelter. Hundreds of unaccompanied children were left in a highly vulnerable situation, denied legal passage to the UK by the Home Office with no right to appeal the decision in a process which the UK Court of Appeal recently ruled to be unlawful.

According to recent reports, a number of these children have since made it to the UK via unauthorised routes, pushing them into the hands of smugglers and subsequent debt bondage once they have arrived. The Child Trafficking Advice Centre (CTAC) has found that since August 2016, 293 young people have arrived in the UK via unauthorised routes, of which just 103 have been located. Social Workers Without Borders said that of the 42 children they assessed as being “in need” in the Calais camp – none of whom were granted safe passage – nine were now confirmed to have made it to the UK alone, while 14 were “untraceable”.