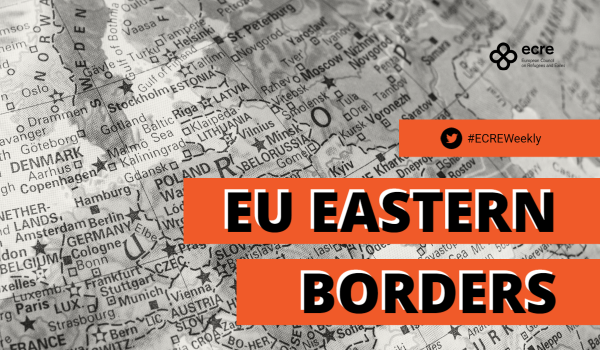 An estimated 100,000 Ukrainians have been displaced in the first 24 hours following Russia’s invasion of Ukraine. On a trip to the country just prior to the attack, the Commissioner reassured media that contingency plans were in place for potential refugees fleeing to Europe. The European Court of Human Rights has applied interim measures, often aimed at halting pushbacks, in 65 out of 69 requests lodged against states on the EU border with Belarus. EU Home Affairs Commissioner Ylva Johansson has warned Poland against extending the state of emergency at the border.

On 24 February, explosions were heard near major Ukrainian cities including Kyiv and “columns of Russian troops” entered the country by land, air and sea. Late that day, Ukrainian president Volodymyr Zelenskiy said 137 people had been killed and 316 others wounded. After weeks of media speculation about a potential Russian invasion, fears of displacement have become reality. The evening of 24 February, 10 kilometre traffic jams were reported at the border crossing between Ukraine and the Polish city of Przemyśl. According to preliminary UN estimates, at least 100,000 people fled their homes in the first 24 hours after the first Russian attacks. The Moldovan president reported that 4,000 people had crossed the border that day. In the same time period, the Polish border guard reported 29,000 border crossings in both directions over the past 24 hours, including 15,000 coming to Poland. The country is setting up nine reception centres near its 535 kilometre border.

European Home Affairs Commissioner Ylva Johansson visited to Poland took place two days prior to Russia’s invasion of Ukraine. When quizzed on 22 February, Johansson had said the EU was “well prepared” to host Ukrainian refugees. Prior to the invasion, the Commission noted that an attack in the east would result primarily in displacement to Western Ukraine, whereas in the case of a larger attack Poland would likely be the biggest refugee destination. Poland, Romania, Slovakia, Hungary, Lithuania, Latvia and Estonia have formulated plans to accept Ukrainians. Late on 24 February, Hungary introduced “temporary protection to Ukrainian citizens arriving from Ukraine and to third-country nationals lawfully residing on the territory”. Slovakia is also reportedly proposing a fast track procedure to provide temporary protection to Ukrainians.

Poland, Latvia and Lithuania have been accused of mass pushbacks since August 2021 when Belarusian began attempts to “instrumentalise” people on the move at the EU border. Between 20 August 2021 and 18 February 2022,  69 requests for interim measures against the three states were made to the ECtHR. These mostly obliged authorities to provide food, shelter or medical care to the applicants, or protected people against removal from the territory. Of the 69 requests, 65 were granted: a very high proportion in contrast to other European contexts. In 2021 for example, only two out of 20 requests for interim measures against Italy were granted, and only two out of 95 against Turkey. The requests brought against the eastern states concern a total of 270 applicants. As of 21 February, measures remained in force in 12 cases.

In the face of pressure to denounce Polish, Latvian and Lithuanian legislation accused of “legalising pushbacks”, the European Commission last year proposed provisional emergency measures for the three states. The proposal was fiercely criticised by the European Parliament’s Civil Liberties, Justice and Home Affairs (LIBE) at a hearing in January. In a follow-up letter, LIBE notes that, though Commissioners Margaritas Schinas and Ylva Johansson both admitted to pushbacks taking place, the former then stated that infringement procedures could not be launched because “there is no evidence that pushbacks are taking place”. The legal basis for the emergency legislation (which cites article 78(3)  of the Lisbon Treaty) has also been called into question. In veiled reference to the situation at the EU-Belarus border, the UNHCR, the UN Refugee Agency on 21 February raised the alarm about the “normalisation” of pushbacks in Europe. “We fear these deplorable practices now risk becoming normalised, and policy based” said UNHCR chief Filippo Grandi.

During her trip to Poland, Commissioner Johansson warned against extending the state of emergency at the border that has blocked access to aid workers, journalists and rights monitors. “Now when the situation has really de-escalated, Poland should not continue with their emergency legislation […] There should be access to the border area” the Commissioner said. The legislation, imposed last August, is set to expire at the end of February. Johansson also visited Lesnowola reception centre which she described as evidence of the “possibility to apply humane living conditions”. In contrast to the Commissioner’s testimony, protests have taken place at both the Wędrzyn and Krosno centres against dire treatment. On 21 February, Polish police announced that another body had been found near the border with Belarus. The man, a 26 year old Yemeni, is the twentieth person confirmed to have died at the border.