Editorial: the TPD Proved Highly Efficient in Ukraine Response – Time to Repeal it? 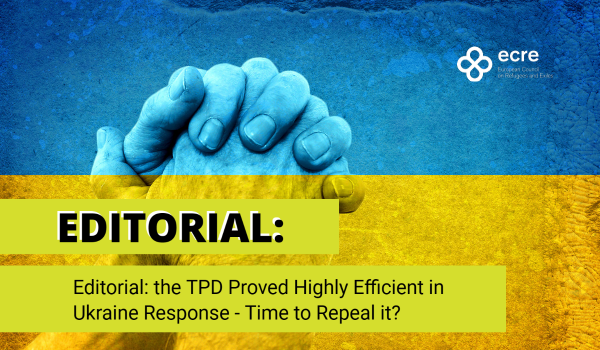 There is widespread consensus that the EU has responded well to the massive displacement from Ukraine and that this is thanks in no small part to the activation for the first time of the Temporary Protection Directive. Why, then, is the proposal to repeal the TPD still under consideration?

The original proposal to repeal is part of the Crisis Regulation, one of the legislative proposals put forward by the Commission in the 2020 Pact. It thus dates from an altogether different context when the TPD had never been triggered and the full-scale invasion of Ukraine was just a twinkle in Putin’s eye.

Despite everything that has happened since, Parliament is on course to support the repeal of the TPD in its position on the Crisis Regulation, possibly to be ready by the end of the month. In the Council, the first discussion of this Regulation took place in the Asylum Working Group at the end of December. While Member States are clearly in no hurry to negotiate on the Crisis Regulation, with many preferring to advance with the RAMM and APR before doing so (on the rather sound basis that rules should be decided before exceptions to rules are decided), still there wasn’t unequivocal support for simply keeping the TPD. Under the Swedish Presidency’s priorities, fifth of five is the Crisis Regulation, so it is still on the table – metaphorically and in the annotated paper versions being examined across town.

What could be better than the TPD?

The idea is that the TPD would be replaced by something better. Under the Crisis Regulation, a new “immediate protection” status would be created, which is – crucially – activated by the Commission using a delegated act, rather than requiring a decision of the Member States as is the case for the TPD. In the Parliament’s draft position on the Crisis Regulation, the alternative to the TPD has now morphed into a prima facie recognition provision, based on the prima facie approach applied in refugee protection globally, and best explained in UNHCR’s 2015 guidelines. By virtue of their objective circumstances, particular groups of people are recognised prima facie as refugees without undergoing status determination – i.e. without having to pass through an asylum procedure.

The three options – the TPD, immediate protection and the prima facie approach – vary in terms of their purpose and scope (when they are used and for which groups of people), their content (what rights are provided) and, crucially, the procedure for activation. On this last point, those favouring an alternative to the TPD argue that Ukraine was an exception, a one-off, and that the TPD will never be activated again. Therefore, immediate protection as per the Crisis Regulation draft or prima facie recognition are preferable because they can be activated by the Commission.

Another argument for the prima facie approach is that the content of protection would be stronger, with beneficiaries receiving refugee status and the wider set of rights attached to it, compared to subsidiary protection under immediate protection (usually but not necessarily a weaker form of protection), and the temporary protection status afforded by the TPD, which only guarantees minimum standards.

There is a lot here that is doubtful. First, is it the case that the TPD will never be activated again? The particularities of the displacement from Ukraine and the reasons why the TPD was used, unlike in 2015, are well known. However, it has now happened, and while Member States might be reluctant to invoke the TPD for other situations, the value to them of the TPD is clear. It seems likely that the use of the TPD would at least be considered in a major crisis, and, politically as well as legally, unanimity is not necessary (as Member States increasingly work on the basis of majority decision-making in asylum matters).

Second, in any case, is the Commission any more likely to trigger one of these mechanisms than the Member States? In the last six or seven years, on asylum matters the Commission’s self-defined role has been “to do what the Member States want”. The idea that it would go out on a limb and propose something when (key) Member States are reluctant seems unlikely, indeed there may be greater potential for minority blocking (via influence over the Commission) in this model.

Third, in terms of scope, in an emergency situation, particularly one characterised by conflict, violence, civil war or state collapse, it may be the case that the people affected do not fit neatly into the definition of refugee under the 1951 Convention. Or that they do, but that states refuse to see this. This may generate reluctance to use an approach based on prima facie recognition of refugee status, and it might not even be appropriate. Other protection statuses and other protection regimes, such as the TPD or the immediate protection status providing subsidiary protection (for flight from violence) might be a better match. If the mechanism is based on refugee status alone, there may be less support for triggering the mechanism.

While the weakness of the content of protection in the TPD is one of the traditional objections to using it – as with other temporary protection regimes – it does not have to be the case: states can decide to go beyond minimum standards, as can be seen with some parts of the Decision on the TPD. Then, even for those with supposed gold standard refugee status, accessing rights in practice is a major challenge in some Member States. Finally, while not ideal, retaining access to an asylum procedure – and the potential for “upgrading” status which has had some success in the courts – remain as safeguards.

The argument is also made that the TPD is not being implemented properly, which can be questioned. ECRE has analysed challenges in implementation (here), and of course there are flaws, and in some cases – also of course – an egregious lack of respect for the law. On the other hand, given the number of people hosted, and in comparison with the level of respect for other parts of CEAS, it could be argued that the implementation of the TPD is going rather well.

A fourth doubt is more immediate one and concerns the drafting and negotiation of the alternative should the TPD be repealed. Some of the current proposals for a prima facie approach involve a distortion of the concept as the prima facie group would still undergo individual, in-merits status determination, which is exactly what should be avoided. To oversimplify, one of the proposals essentially creates an additional ground for prioritisation under the APR A33(5). It is thus not in line with the central concept of prima facie recognition for a group. Some of the latest drafts propose a form of what UNHCR terms “prima facie approach with individual procedures”. The latter is a rarely variant of the standard group prima facie recognition, whereby those in the group deemed prima facie refugees might still undergo an individual procedure but it is based simply on establishing that they are members of the group rather than any other assessment. Member States use variants of such an approach for certain caseloads already and it is still more onerous than the TPD.

Related to this point, the great value to the Member States of the TPD is the extent to which it reduces their responsibilities. Imagine if the TPD had not been invoked and the 5 million people hosted under the TPD regime had submitted asylum applications. The granting of a swift – automatic – protection status, where the only requirement is registration, creates security for the people affected, but it has also proven to extremely effectively meet the objective of relieving the administrative burden on the Member States – the factor that makes it likely that they would consider using it again. The prima facie approach, and certainly some of the versions of it that are under discussion, would not be as light in terms of process. Thus, at very least, the argument for keeping the TPD in addition to other options, is clearFifth and finally, in addition, given the overloaded legislative process and over-burdened co-legislators – and ticking clock – there is a strong risk of further amendments and deals such that the proposal becomes something weaker, more complex or even unworkable. This is even without taking into account the separate, highly negative elements of the Crisis Regulation.

When the Pact was published, ECRE both welcomed the immediate protection proposal and put forward ideas on codifying in EU law a prima facie recognition approach. Nonetheless, ECRE’s position was always to keep the TPD as well. Displacement crises are very different and the political factors that shape the EU’s response vary, so a range of options is an advantage. Anything that might provide a route to avoiding panic and pushbacks has value. Given all the events that have taken place since 2020, and the doubts mentioned above, rejecting the repeal of the TPD and keeping it as a back-up option now looks essential. Of course, mechanisms that are not dependent on often elusive Member State agreements, and ones that rightly offer stronger protection statuses, are welcome. However, repealing the TPD, a legal tool that is working effectively and providing for the relative smooth hosting of 5 million people –  with considerable uncertainty about what would replace it – looks, well, rather risky to say the least.