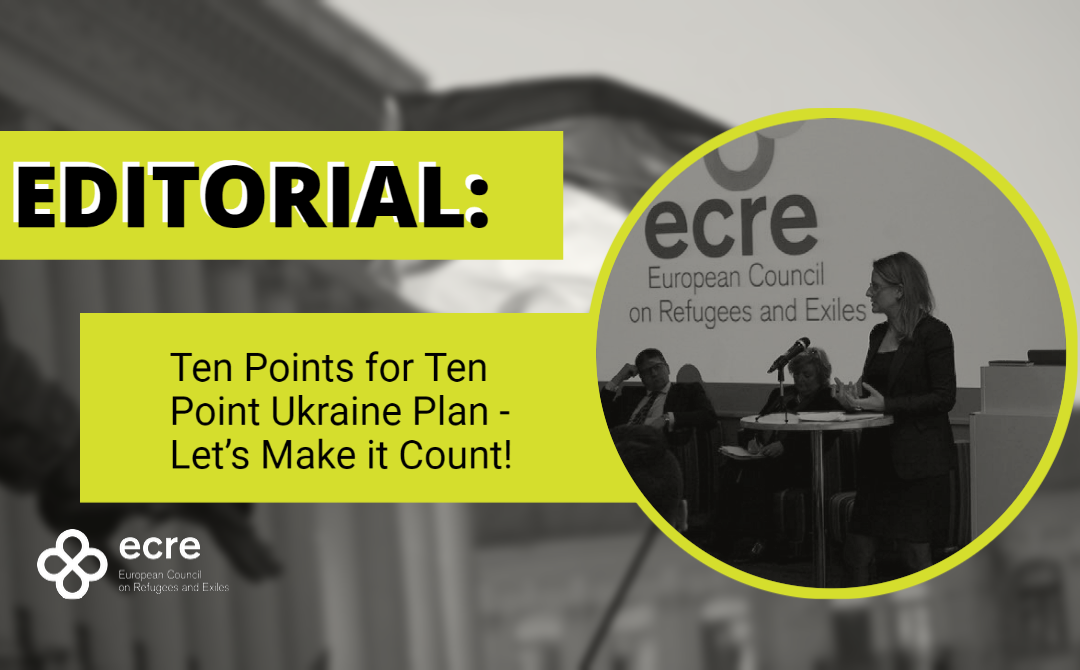 The ongoing displacement from Ukraine has been met with the complete opposite of the usual response to refugee arrivals from the EU – which is to be welcomed. To illustrate the new positive approach of the EU, at its extraordinary meeting on 28 March, the Justice and Home Affairs Council endorsed a 10-point plan drafted by the Commission, which contains measures that are primarily aimed at supporting access to protection for refugees. There even seems to have been a competition between the French Presidency and the Commission over whose welcoming plan was to be presented to the Member States. It could not be further from the JHA Council’s response to displacement from Afghanistan in 2021, which focused all efforts on preventing arrivals.

The 10-point plan centres on consolidating and building the role of the EU in the response to displacement from Ukraine. That includes EU coordination: an EU platform for registration (point 1), an EU-level approach to transport and information hubs (2). Then EU support: mapping of reception capacity (3), common guidance on reception of children (5), a common anti-trafficking plan (6), management of security threats (9), and EU funding with simplified procedures (10). There is also EU involvement at the international level with support to Moldova (7) and the use of the EU Solidarity platform to channel refugees to safe destinations outside the EU (8).

It should be noted that the 10-point plan is just the latest in a series of useful documents from the Commission, including a Communication, and guidelines on the situation at the borders and the guidelines on implementation of the Temporary Protection Directive (TPD), following the Commission’s successful effort to persuade the Member States to trigger the TPD.

The image is of an active and determined Commission which wants the EU to be at the centre of the response: Even under point 4, on developing national contingency plans, which focuses primarily on the responsibility of the Member States, there are also EU responsibilities – there will be a European contingency plan and an “EU Index” into which all member states and international organisation should feed information. Across the 10-point plan, as well as the Commission, there are references to four EU agencies, an EU Coordinator, an EU index, two EU plans, and three EU platforms.

There are two important elements of note. First, that the EU is so determined to be at the centre of response on Ukraine. This reflects the scale and the proximity of the crisis but it may also be linked to the experience of Commissioner Johansson. In 2015/2016, Johansson was the minister for employment and integration when Sweden received the highest number of asylum applicants relative to population size of any EU member state. It was well-documented that the country felt abandoned by the EU and by its fellow EU states. There is an urge to avoid the same scenario.

The second important element is the content of the plan. This is not just an EU determined to be active, it is an EU determined to offer protection to refugees. From the title of the plan onwards, the substance is about ensuring that refugees receive protection; it is a plan on “welcoming people”. This constitutes a reversal of the policies of recent years, where so many initiatives of the EU and of the Commission specifically have been focused on limiting protection in Europe by creating obstacles to accessing territory or asylum procedures, or proposals that would reduce the prospects of a protection decision or strip away the rights attached to protection. The language is telling: here, refugees are “people”; in all the documents from last year on Belarus and instrumentalisation and on events in Afghanistan, the word “people” is studiously avoided “they” are usually “migrants”.

The reason given for the restrictive approach was usually that it was “what the Member States wanted”. The difference in the current crisis is that the Commission assertive, it is rediscovering the role bestowed on it by the Treaties by taking the initiative and by pushing, encouraging and even obliging the member states to do better.

Despite the good stuff that is in the Plan, there is one major omission: there is no point on solidarity within the EU, reflecting the lack of agreement on any sort of mandatory or even more formalised solidarity mechanism to support a balanced distribution of people across the member states. While the EU is managing the Solidarity Platform which is open to offers of all types of solidarity, the question is whether there needs to be more transfers of people from the countries at the borders of the EU, given the extraordinary numbers they are hosting (Poland, 2.5 million and counting; Romania and Hungary each with +800,000).

Germany’s interior minister publicly expressed regret about the absence of a solidarity mechanism, as well she might, given that many people will make their way to Germany. There is also a new twist on the old, old solidarity discussion: the country most in need of solidarity is Poland, a country famously opposed to providing solidarity to others, and particularly resistant to solidarity in the form of relocation and to mandatory solidarity.

While it is admirable that Poland is hosting so many refugees – and there is a strong desire on the part of many Ukrainians to remain as close as possible to their country – there is also a suspicion across Brussels that Poland is not asking for more solidarity in the form of transfers of people elsewhere for the “wrong” reasons. Could it be that it does not want to weaken its hand in the wider debate on responsibility sharing and in relation to the legislative reforms by requesting, needing and relying on the solidarity of others? Whatever the truth of the matter, the situation is critical and it is important that people move on, even if that is achieved through encouragement and invitation. This needs to happen while other member states and countries beyond the EU are open to receiving people, and pledging to accept previously unheard of numbers of refugees (in the case of Canada an “unlimited” number).

In another reversal of the usual state of affairs, the 10-point plan seeks to support and even facilitate onward movement out of the countries of first arrival. It is to be hoped that it manages, even in the absence concrete solidarity mechanisms. Something that is not new: fair geographic distribution of responsibilities within Europe will be key to an effective response.