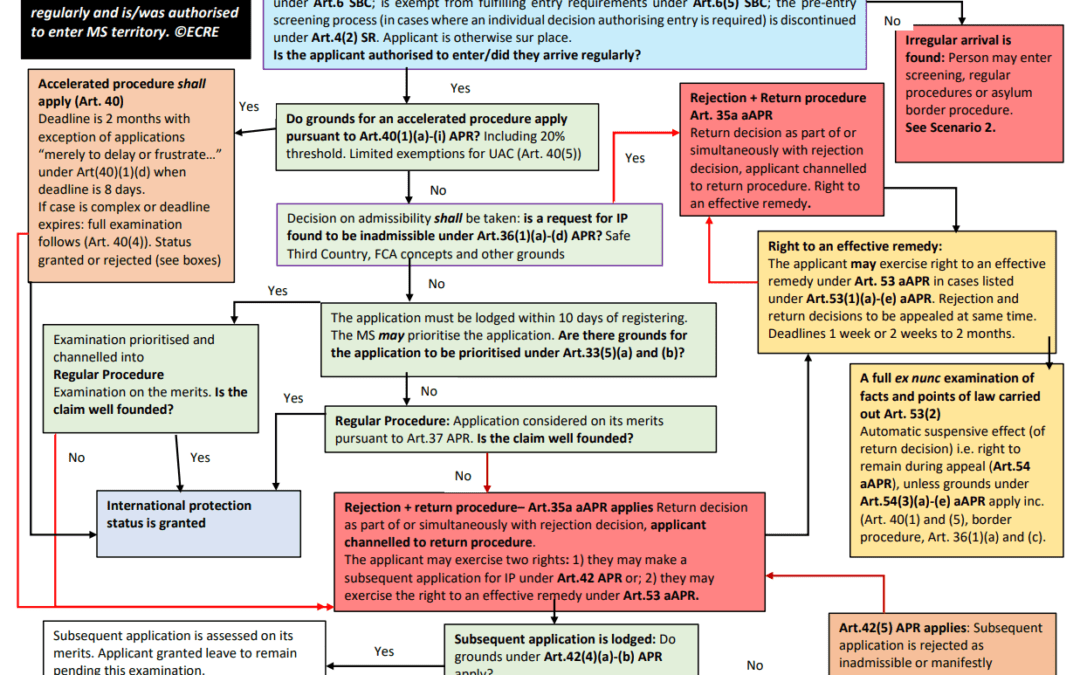 This week ECRE publishes two charts showing the procedural labyrinth facing asylum applicants in Europe, should proposed reforms go ahead. Scenario 1 shows the “regular” asylum procedures for people who were authorised to enter – the majority of applicants. Scenario 2 shows the asylum procedures for those who arrive at the borders, either seeking protection at a land border or disembarked following search and rescue. Certain of those who are found by the authorities in the country having entered irregularly will also be transferred to centres at the border to follow Scenario 2, which starts with the new screening process.

The charts are based on analysis of the proposed reforms to asylum procedures of 2016, supplemented and partially amended in 2020. In 2016, a legislative proposal was tabled for an Asylum Procedures Regulation (APR) to replace the Asylum Procedures Directive which governs procedural matters in EU asylum law. The APR was part of the CEAS reform package of 2016; amendments to the proposal were published in September 2020 as part of the European Pact on Migration and Asylum. The two have to be read together as the amended APR (aAPR) because much of the 2016 proposal remains intact, with the 2020 amendments simply adding and removing certain elements.

As caveats, first, following the jurisprudence of the European Courts, ECRE considers that those at the borders seeking protection are on the territory and within the jurisdiction of the country concerned; it rejects the fiction of non-entry which claims that the people covered by Scenario 2 have not entered the country, thus the distinction “on the territory” and outside it will not be accurate in almost all cases. Second, many elements are not covered by the charts due to lack of space. For example, more detail can be found on procedural guarantees for the applicants at each stage in the process in ECRE’s analysis of the proposals; the variations that apply in crisis situations are not fully incorporated in the charts; the solidarity mechanisms and relocation are not presented at all here.

The aAPR is now being analysed by the co-legislators, the Council and the Parliament, with both debating amendments to the text, with a view to reaching their respective positions. After that, the trilogue process would seek an agreement between the two on the content of the future legislation. The charts show the procedural set-up should the proposals be accepted as stands, i.e. based on the legislative proposals of 2016 and 2020, read in conjunction with the existing legal framework, without incorporating information on the positions of the Council and Parliament.

Visualising the proposed asylum procedures, the following observations can be made:

First, the sheer complexity of the set-up is quite striking. It derives from the underlying objectives of the proposal which are to use procedural means to limit the number of people receiving protection in Europe and to limit onward movement (“secondary” movement within the EU+). The proposal uses different grounds to filter people into sub-standard procedures in order to reduce the numbers that make it through into the full(er) and fair(er) standard or regular procedure. Similarly, procedural changes are used to keep as many people as possible in situations of (de facto) detention.

Second, the continuation of excessive responsibility of the countries at the external borders leaps out. Countries will have to put in place a border procedure (currently optional in the CEAS), along with an entire border infrastructure, as  per Scenario 2. This is in addition to elements that should be added to the regular (in country) set-up, as per Scenario 1. The RAMM, the Regulation on Asylum and Migration Management, another part of the Pact is supposed to compensate for the increased responsibilities, including the increased administrative burden on the procedural side; ECRE argues that it does not.

Of course, this could be tactical and resolvable – the co-legislators might amend the “may” clauses and replace them with “shall” clauses and greater certainty. This seems unlikely though and the opposite may even occur – Member States do not tend to remove flexibility and discretion in EU law, and deals may depend on keeping provisions vague.

Also part of the procedural infrastructure at the border are other procedures. The screening is termed a process but for some it will serve as a poor quality alternative to an asylum procedure. The debriefing form provided at the end of the screening includes the information on which of the four outcomes will apply – refusal of entry, return procedure, asylum procedure or relocation. ECRE argues that the form should be considered an administrative decision (and that there should be a right to review). The accelerated procedure, inadmissibility procedure, and Dublin (RAMM) procedure may also be applied at the border. The latter is positive for the applicants because it is the only route to family reunification. In the regular, “on territory” set-up, the accelerated procedure and inadmissibility procedure must be used when the grounds for application are present.

Fifth and finally, the asylum procedures at the borders and in country are incredibly hard for refugees to navigate. With this level of complexity and uncertainty, it is difficult to understand the law. There will still be obligations to provide information to applicants, including in languages that they understand, but information provision cannot suffice. Fair treatment will depend on legal assistance and many applicants struggle to find legal advice and/or representation when needed. Lawyers working in the system will also be hampered by the complexity.

ECRE has generally analysed the proposals from the perspective of fundamental rights, including the right to asylum and the responsibility to offer international protection to those entitled to it. Here, the charts show the false economies at work. The proposed asylum procedures add complexity, inefficiencies and administrative burden, perhaps to the point that they are unworkable.