ECRE Working Paper: Transforming Eurodac from 2016 to the New Pact: From the Dublin System’s Sidekick to a Database in Support of EU Policies on Asylum, Resettlement and Irregular Migration 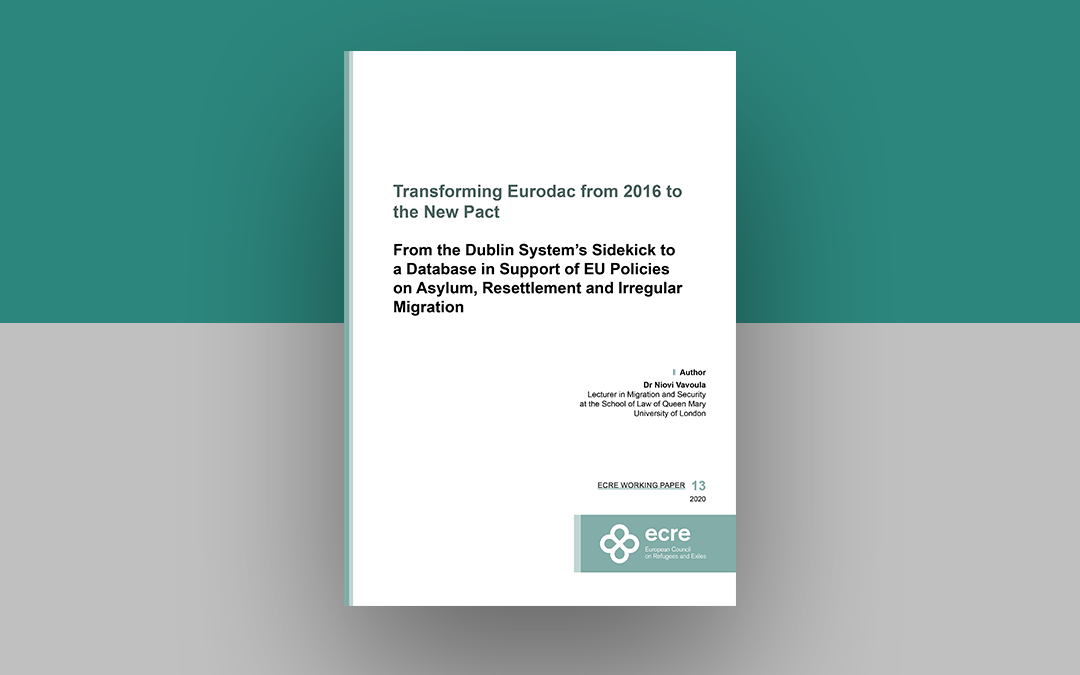 This working paper, by Dr Niovi Vavoula, provides us with an overview of subsequent amendments to the Eurodac Regulation, including the latest Amended proposal of the European Commission, one of the legislative files that accompanied the Pact on Asylum and Migration, published in September 2020.

Eurodac, which stands for European Dactyloscopy, is an EU-wide information system that primarily processes the fingerprints of asylum seekers and certain categories of irregular migrants. Operational since 2003, Eurodac constitutes the EU’s first experiment with biometric identifiers and was designed to assist in the implementation of the Dublin system for the determination of the Member State responsible for examining an application for international protection.

On 4 May 2016, the Commission adopted a recast Eurodac proposal in the framework of revising the CEAS-related legal instruments. The proposal essentially detached Eurodac from its asylum framework and re-packaged it as a system pursuing “wider immigration purposes”. On 23 September 2020, the Commission proposed further amendments to the Eurodac regime. The amended proposal prescribes several amendments to the functionalities of Eurodac both in the framework of CEAS and migration control and in an interoperable environment, whilst taking into account the 2018 interinstitutional agreement between the Council and the Parliament.

Against this background, this paper takes stock of the forthcoming changes in the Eurodac legal framework, both those arising from the 2016 Proposal as well as those that emerged during the interinstitutional negotiations on that proposal. The paper demonstrates that Eurodac is progressively being transformed from an information system of limited aims and capacities into a support tool for a range of EU policies on asylum, resettlement and irregular migration. The amended proposal in the framework of the New Pact on Migration and Asylum builds on the 2016 proposal as negotiated by the co-legislators and further dismantles the distinctions between policies of irregular migration and asylum by progressively merging the treatment of asylum seekers and irregular migrants.

The paper analyses the fundamental rights implications of the 2016 proposal and amended Eurodac proposal of September 2020. The analysis is focused on the impact of the proposal on the rights to respect for private life (Article 7 of the EU Charter of Fundamental Rights), protection of personal data (Article 8 of the Charter), the rights of the child (Article 24 of the Charter), and the right to asylum (Article 18 of the Charter). The paper is aims to provide a framework to inform policy-making, and to end provides several recommendations for amending the proposed regulation.