ECRE Recommendations: The EU’s Response to Displacement from Ukraine 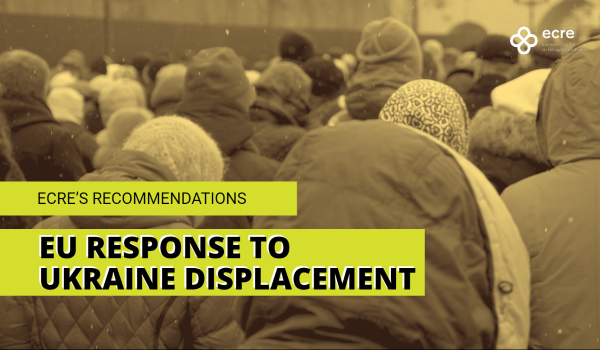 ECRE’s new recommendations published on 5 January collates and updates earlier recommendations to the EU and its Member States. It draws on the work of ECRE’s members across Europe which are directly involved in the response, as well as ECRE’s Information Sheet providing a detailed analysis of implementation of the Temporary Protection Directive (TPD) country by country.

ECRE’s assessment is that the EU’s response to displacement from Ukraine is largely positive, however, there are areas where changes can be made in order to better support displaced people and to ensure that asylum systems continue to function. Accordingly, ECRE calls on EU Member States (EUMS) to correctly apply the TPD and to use the European Commission’s operational guidelines to ensure uniform application across the EU.

Specifically, ECRE underlines the need to maintain TP status for the whole duration of the TPD regime. ECRE notes that diverging policies on “pendular” movements of TP beneficiaries between EUMS and Ukraine may lead to premature withdrawal of the TP status and thus the suspension of related rights and benefits. ECRE also recommends responses for people fleeing Ukraine who are outside the scope of the TPD regime and for people fleeing Russia, many of whom are likely to be in need of international protection. Further, ECRE recommends a continued role for the EU Agencies, both in supporting access to territory and in ensuring protection in the EU, as well as a focus on inclusion from the outset through access to rights once immediate protection is provided.

Overall, the TPD is an instrument of the Common European Asylum System (CEAS) so access to rights under the TPD should not be organised and implemented in a parallel system to that of other beneficiaries of international protection. In ECRE’s view, EUMS should invest in more efficient and humane asylum systems for all, through adequate resourcing and respect for legal obligations. Rather than developing a two-tier system, lessons from the Ukraine response should be applied to the asylum system as a whole.