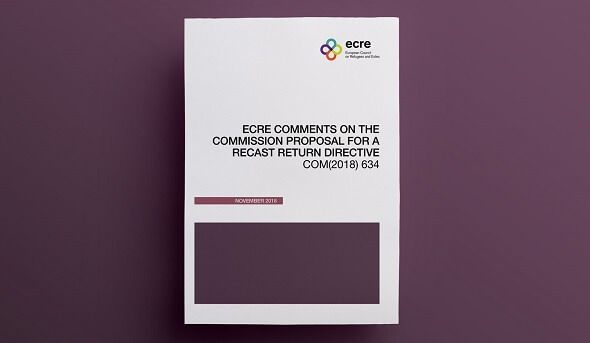 ECRE has published its comments on the European Commission’s proposal for a recast Return Directive. The Commission has billed its proposal of September 12, 2018 as a ‘targeted review’, however, its impact could be far-reaching, leading to increased detention, including at the EU’s external borders, and a lowering of safeguards to the detriment of third-country nationals’ fundamental rights. As it concerns a recast proposal ECRE has limited its analysis to the impact on fundamental rights of those provisions the European Commission is proposing to amend.

The European Commission’s amendments include new criteria to assess a ‘risk of absconding’ – a grounds for detention as well as for not granting voluntary departure. This new list of criteria is so broad it could lead to systematic detention, reversing the presumption whereby detention should only be considered as a last resort and severely limiting individuals’ possibilities to choose a more humane voluntary departure. There are more restrictions on voluntary departure, including instances where it would not be available at all. Legal remedies have been restricted both in terms of imposing extremely tight time-limits, as well as reducing the possibilities for appeal and the suspensive effect of appeal after the first instance.

There are new grounds for detention as well as a new maximum period of detention of between three and six months. The proposed new border procedure is extremely problematic from a human rights perspective. In particular, the link between asylum and return procedures, systematic detention at the border, detention periods, time limits for lodging appeals and the effectiveness of the remedy provided, the proposed fast-track return procedure – all set an extremely low standard, which is at odds with international human rights law and the EU Charter of Fundamental Rights.

There is a new obligation on Member States to develop return management systems which could be a welcome improvement and provide more data on returns, which is generally weak. There is currently little information on what the Frontex centralised system for return case management might look like but in light of increased risks of violation of data protection rules triggered by national and centralised return management systems, data protection guarantees would need to be strengthened. Finally, the proposal calls on Member to have programmes providing for enhanced return assistance and counselling and support for reintegration in third countries of return with the aim of promoting voluntary return, although these are linked back to a very broad and ill-defined obligation to cooperate.

The fact that the proposals have been presented only eight months before the European elections in May 2019 provides very little time for the European Parliament and Council to adopt their respective positions and conclude inter-institutional discussions. Civil society organisations such as the Swedish Red Cross and the Swedish Refugee Advice Centre have expressed their concerns about the proposal including the probability of increased detention. In his blog, Steve Peers, Professor of Law at Essex University has said, ‘This proposal is entirely concerned with facilitating the expulsion of irregular migrants, and detaining them to that end – in addition to imposing entry bans to make sure they do not return.’