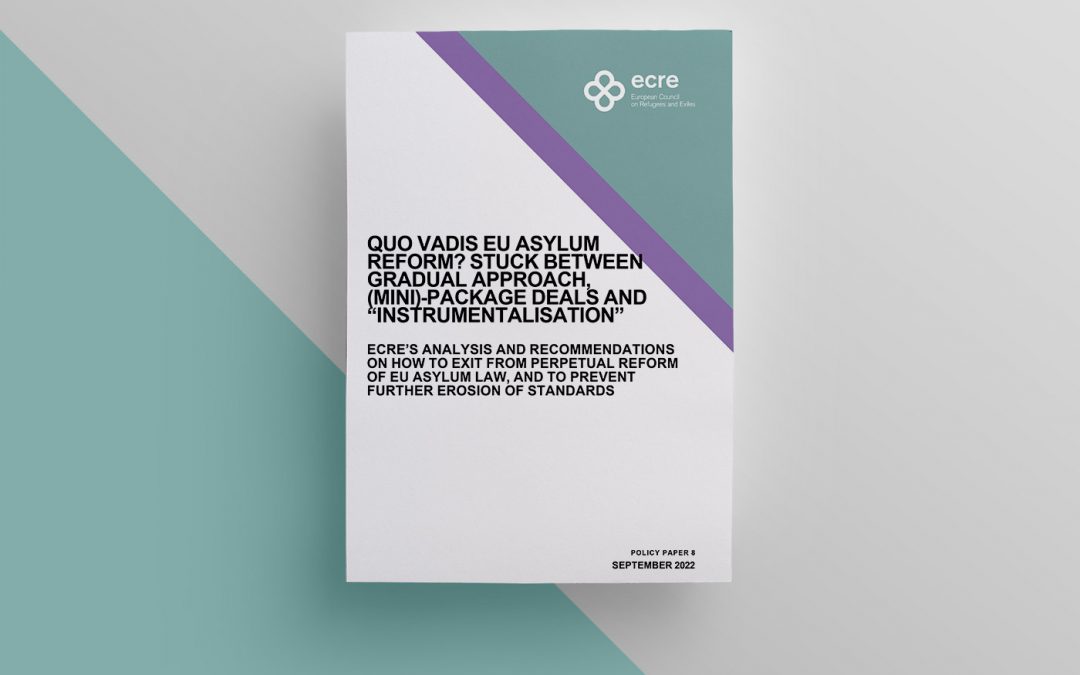 ECRE published today a policy paper that describes the most likely of the possible partial reforms and “mini-deals” covering asylum, return and Schengen policy. It describes three possible deals, analyzing the position of co-legislators, and provides recommendations on individual files based on minimizing the damaging impact on the right to asylum in Europe.

In June 2022, the rather active French Presidency of the Council of the EU wrestled an agreement from Member States in June 2022 on three key legislative proposals, the reform of the Schengen Border Code (SBC), the Screening Regulation, and the Eurodac Regulation. In exchange, an agreement was also reached on a voluntary solidarity mechanism, These developments are part of the “Gradual Approach” the term used by the French Presidency for the agreement they planned to broker to take forward the long-stalled reforms of EU asylum law.

This advancement in negotiations is an exception to the rule, however. Very limited progress has been made on most of the legislative proposals that are part of the Pact on Migration and Asylum launched in September 2020 and certain proposals from the 2016 reform package and the 2018 recast Return Directive are still formally under negotiation. The situation is further complicated by the introduction of more proposals in 2021: the proposal for an amended Schengen Borders Code and the proposal for a Regulation addressing situations of instrumentalisation in the field of migration and asylum (Instrumenatlisation Regulation).

Time is running out. There is less than two years to conclude the process, involving each of the co-legislators, the Council and the European Parliament, deciding on its position, entering negotiations with the other, and mutually agreeing on the legislation for adoption. While the European Parliament and the rotating Presidencies of the EU recently agreed on a roadmap which covers nine legislative proposals (not including the proposed Schengen Borders Code or the Instrumentalisation Regulation) in line with the so called “package approach” whereby nothing is agreed until everything is agreed, it is not realistic that all or even most legislative proposals are adopted in this timeline. It is more likely that a partial reform will take place, with two or three legislative proposals making it through the process in the form of one or a series of “mini-deals”. The Czech Presidency has the ambition to advance parts of the 2020 proposals, to revive some of the 2016 proposals, and to reach agreement on the 2021 Instrumentalisation Regulation.

This Policy Paper focuses on the possible partial reforms or “mini-deals”. It describes which mini-deals are on the table, analyses the positions of the co-legislators, and provides recommendations on individual files based on minimising the damaging impact on the right to asylum in Europe. It builds on ECRE’s detailed analysis of the various legislative proposals as set out in ECRE’s Comments.