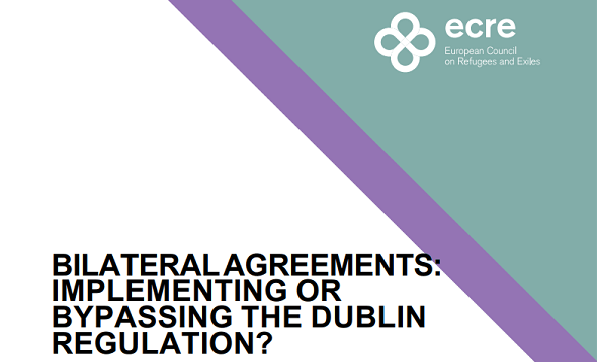 ECRE has published a Policy Paper analysing the recent bilateral arrangements between EU Member States on responsibility for asylum seekers and urging against attempts to disregard and undermine the standards set out in the Common European Asylum System (CEAS).

The “administrative arrangements” on asylum seekers have emerged as a German initiative in the course of 2018, predominantly driven by internal tensions within the ruling coalition on how to handle migration in the run-up to the June 2018 European Council meeting. They have been presented by Germany as an interim response to the political deadlock preventing the adoption of the CEAS reform.

While some agreements such as the German-Portuguese arrangement adhere to and operate within the EU legal framework, others, namely the German-Greek and German-Spanish arrangements, bypass the rules set out in the Dublin system with the aim of quickly carrying out transfers. The effect of the latter arrangements is the neutralisation of crucial safeguards contained in the Dublin Regulation such as the right to a personal interview, the right to appeal, and the prevention of transfers when human rights risks arise.

From a policy perspective, what both types of arrangements represent is a vision of the CEAS and of the CEAS reform strongly supported in Germany and certain other Member States whereby prevention and punishment of secondary movement is of prime importance, while tackling the underlying reasons for secondary movement receives less attention.

However, ECRE argues that bypassing legal obligations through opaque informal arrangements with the pretext of a forthcoming political agreement on the reform of the CEAS not only undermines the credibility of the current and any prospective asylum package but also endangers the rule of law. Instead, compliance with the Dublin Regulation in line with fundamental rights should be pursued to ensure that individuals benefit from crucial procedural safeguards and that states allocate responsibility transparently and remain accountable.