ECRE Policy Note: Tightening the Screw: Use of EU External Policies and Funding for Asylum and Migration 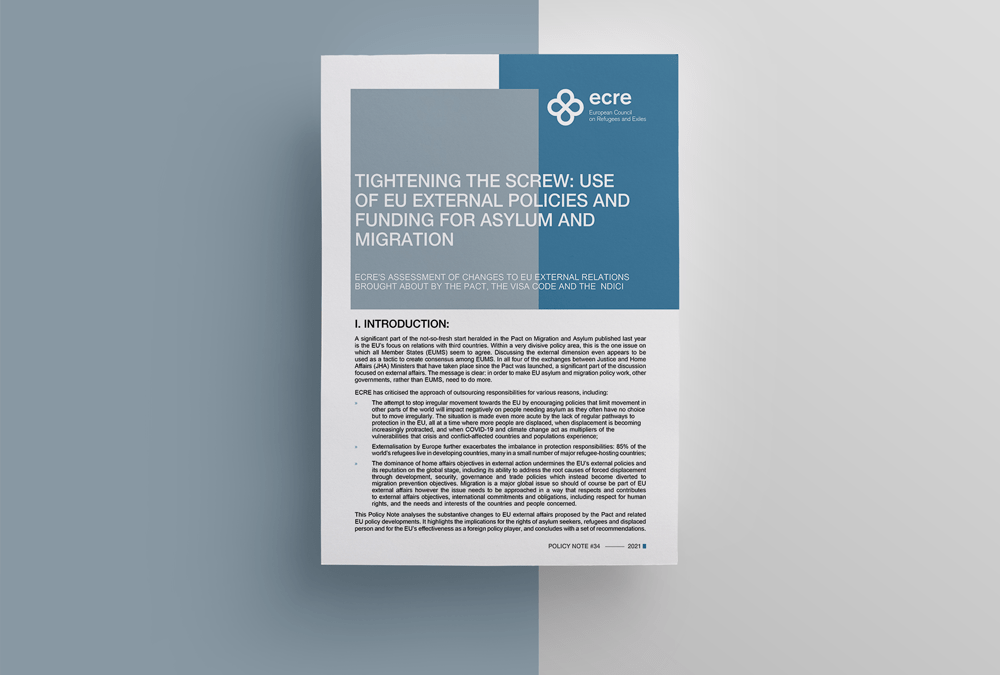 ECRE published a Policy Note which analyses the substantive changes to EU external affairs proposed by the Pact and related EU policy developments.

A significant part of the not so fresh start heralded in the Pact on Migration and Asylum published last year is the EU’s focus on relations with third countries. The message is clear: in order to make EU asylum and migration policy work, other governments rather than EU Member States, need to do more.

The Pact is best understood as a continuation of the approach embedded in the Partnership Framework of 2016, which attempted to make EU external affairs subservient to EU home affairs objectives. However, the Pact goes beyond stating ambitions in political declarations and attempts to codify some of these ideas in legislation, mostly notably in the Regulation on Asylum and Migration Management (RAMM). ECRE has commented in detail on the RAMM and summarises proposals with implications for EU external affairs in this Policy Note.

The Pact also introduces review processes that assess relations with third countries according to objectives defined by home affairs but are proposed to have implications for EU external affairs. This builds on the annual assessment of readmission cooperation introduced by the revision of the Visa Code. The ambition is to go beyond visas and take measures in other policy areas to improve cooperation on readmission. Attempts to make allocation of development assistance dependent on the extent to which third country governments cooperate with the EU on its objectives related to migration have succeeded.

ECRE recommends that co-legislators remove the relevant parts of the legislative proposals or, if that is not possible, include safeguards to guarantee EU external actors and related objectives guide external affairs and to ensure compliance with EU and international obligations.