ECRE Policy Note: Return as “Non-Essential Travel” in the Time of Pandemic 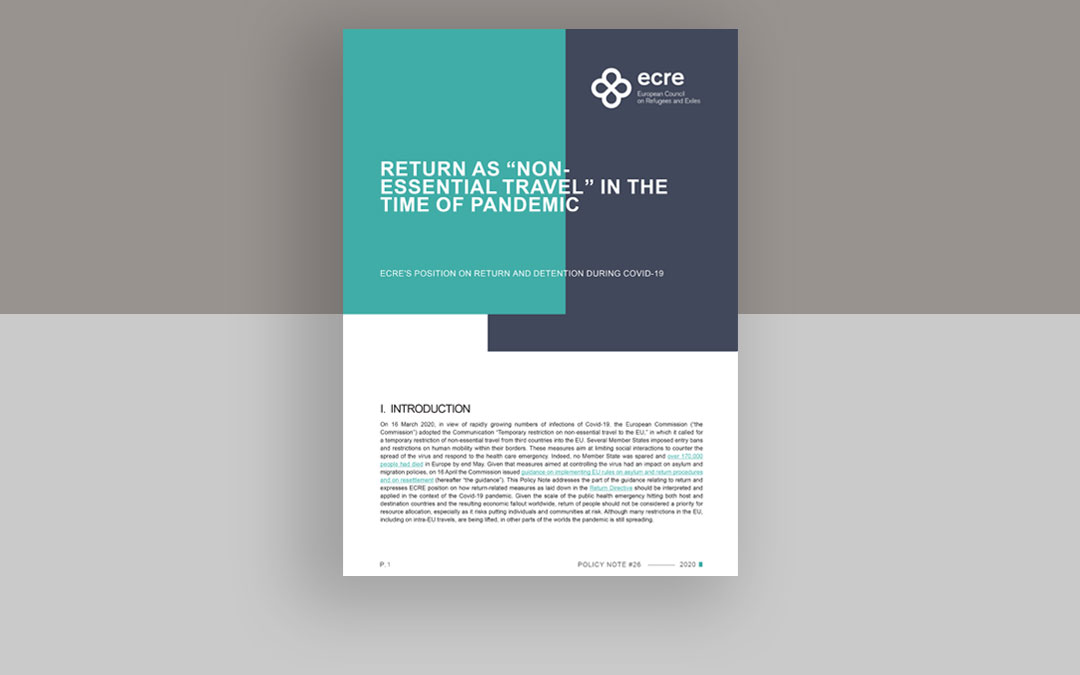 The ECRE Policy Note ‘Return as “non-essential travel” in the time of pandemic’ discusses the European Commission’s guidance on implementing EU rules on asylum and return procedures and on resettlement and expresses ECRE position on how return-related measures established in the Return Directive should be applied in the context of the Covid-19 pandemic.

Borrowing from the Commission’s communication ‘Temporary restriction on non-essential travel to the EU’, ECRE argues that return and pre-removal detention are non-essential measures in the context of the pandemic and its aftermath. Given the scale of the public health emergency hitting both host and destination countries, return of migrants cannot be considered a policy area that should absorb resources, especially as it risks putting individuals and communities at risk. Although most restrictions in the EU, including on intra-EU travels, may be lifted in the near future, in other parts of the world the pandemic is still at its height and economic fallout will be difficult to contain.

Since travel bans have been imposed, returns became impossible in most cases. Even when travel restrictions will be lifted, the social distancing rules and other adaptation measures will render return procedures cumbersome. Indeed, several countries carry out no or very few returns in practice. However, in almost none of them, did the government adopt a policy to officially halt returns. Instead of tacitly postponing removals and keeping people in limbo, states should take a principled stance and place a moratorium on removals. An official policy to suspend returns would reflect both principles underlying EU return policy, namely effectiveness and fundamental rights, and would show solidarity with third countries.

In fact, postponing removals is a half-way, expensive solution. It requires regular reassessment of the possibility of return, hence administrative and judicial processes. Suspension of removal would give clarity to the person concerned and respect the person’s inherent dignity. Return also undermines national health policies of destinations countries. Most common receiving countries, including Afghanistan, Pakistan, Iraq, and Nigeria, are already battling the pandemic with limited capacity of their health systems. By suspending returns, the EU can show solidarity with those countries because, according to the Commission, “the global coronavirus pandemic requires a global response.”

As return is currently mostly impossible and in the near future will be disproportionately difficult to carry out, people in an irregular situation should be offered a residence permit, based on article 6(4) of the Directive. The underlying approach of the Directive is clear: states should either return a person or grant the person a regular status. Leaving people in an undocumented situation in the current pandemic would also prevent them from accessing health care and adequate services, essential for the prevention of the spread of the virus. In addition, as labour shortages in various vital sectors became patent, it is wasteful not to allow migrants to contribute their knowledge and skills for the benefit of society.

In light of both legal and public health considerations, immigration detention should cease. States should adopt an official policy releasing people from detention and suspending the issuance of new detention decisions. With removals suspended, pre-removal detention loses its legal basis. Under article 15(4) of the Directive, when a reasonable prospect of removal no longer exists, detention ceases to be justified and the person should be released immediately. In addition, considering public health considerations, detention would hardly stand the necessity and proportionality test.