ECRE Policy Note: Moving on with the EU Asylum Agency 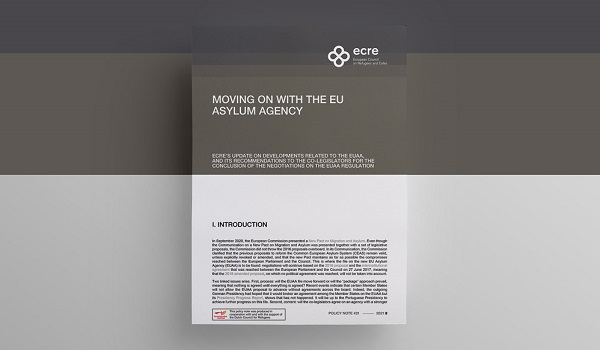 In this policy note, ECRE in cooperation with Dutch Council for Refugees (DCR) presents its adapted recommendations for the EUAA based on research it carried out on the operations of EASO, and drawing on its Comments on the 2016 proposal and previous policy note on the role of the EUAA.

In its Communication, the Commission clarified that the previous proposals to reform the Common European Asylum System (CEAS) remain valid, unless explicitly revoked or amended, and that the new Pact maintains as far as possible the compromises reached between the European Parliament and the Council. This is where the file on the new EU Asylum Agency (EUAA) is to be found: negotiations will continue based on the 2016 proposal and the interinstitutional agreement that was reached between the European Parliament and the Council on 27 June 2017.

Two linked issues arise. First, process: will the EUAA file move forward or will the “package” approach prevail, meaning that nothing is agreed until everything is agreed? Recent events indicate that certain Member States will not allow the EUAA proposal to advance without progress on all files.  Indeed, the outgoing German Presidency had hoped that it would broker an agreement among the Member States on the EUAA but its Presidency Progress Report, shows that has not happened. It is now up to the Portuguese Presidency to achieve further progress on this file.

ECRE proposes separating the EUAA debate from the rest of the proposals in order to allow the EUAA to reach its full potential and also to ensure that the role of the EUAA is not adapted based on a more restrictive vision of limiting asylum in Europe.

As for content, the question arises whether the co-legislators will agree on an agency with a stronger protection-oriented mandate, based on a long-term vision?