ECRE Comments: on the Commission Proposal for a Screening Regulation COM (2020) 612 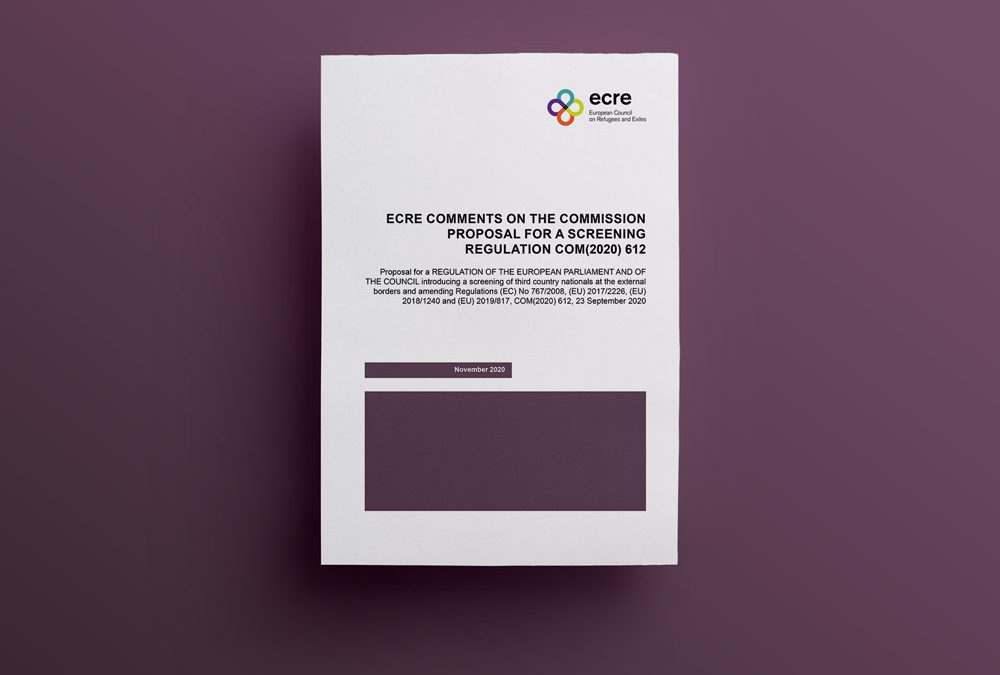 ECRE is publishing key observations and recommendations on the Commission Proposal for a Regulation of the European Parliament and of the Council introducing a screening of third country nationals at the external borders.

A new and welcome element laid down in the Regulation is independent monitoring mechanism (Article 7), which the Member States are to establish. In order for the mechanism to be an effective tool for monitoring fundamental rights at borders it has to cover all border activities, to be managed by independent actors, to lead to investigations and, where relevant, disciplinary measures, and there should be consequences for the non-compliance of Member States.

The screening process laid down in the Screening Regulation raises fundamental rights concerns:

Delayed access to asylum procedure (Article 3): the screening at the external borders is to apply to any person apprehended in connection with an unauthorised crossing of the external border of a Member State by land, sea or air, disembarked in the territory of a Member State following a search and rescue operation, or applying for international protection at external border crossing points or in transit zones and who does not fulfil the entry conditions set out in Article 6 of the Schengen Borders Code. The screening is to apply to persons regardless of whether or not they have applied for international protection. Hence, except for (rare) cases where an asylum seeker fulfils the entry conditions or presents him/herself to asylum authorities within the territory, all asylum seekers will need to pass through the screening process before having access to an asylum procedure. With the delayed access to the asylum procedure, the entitlements and protections guaranteed to asylum seekers under the CEAS, such as reception condition, restrictions on detention, and procedural safeguards, may not be afforded to the person concerned. ECRE argues that to avoid any ambiguity, it should be restated that as soon as the person expresses his/her wish to receive international protection, it should be guaranteed that he/she is entitled to rights under the Reception Conditions Directive.

Risk of racial profiling (Article 5): Member States should apply screening to third-country nationals found within their territory where there is no indication that they have crossed an external border to enter the territory of the Member States in an authorised manner. The provisions on in-country screening raise three sets of concerns. First, the terms “found” and “apprehended” are used interchangeably in the text, and the latter suggests proactive measures on the part of authorities and may encourage discriminatory law enforcement activities. Second, how will the person be able to prove upon apprehension that he/she crossed external borders in an authorised manner? Third, there is a risk that this provision will be applied to people who present themselves to the authorities to apply for international protection, after having evaded border checks. How will their situation be differentiated from the one of a person applying for asylum following apprehension? The screening within the territory leads to referral to either return procedure or in-county asylum procedure, so the screening unnecessarily delays the start of the procedure. In light of these concerns, the applicability of the screening procedure within the territory should be abandoned.

Systematic detention (Articles 4 and 6(1)): the screening at the external border is to take place at locations situated at or in proximity to the external border and during the screening at the external border people would not be authorised to enter the territory of a Member State. A combined reading of these provisions implies that the persons undergoing screening will be, as a rule, deprived of their liberty, although the operative part of the Regulation is silent on that point. Recital 12 provides that the measures preventing entry may include detention, subject to the national law regulating that matter. The reference to domestic law in Recital 12 is misplaced: since the screening obligation stems from EU law, the modalities of the resulting detention cannot be left to the discretion of the domestic legislator. There is a strong risk that the Member States will simply not qualify the containment measure required to implement the Regulation as detention, leading to de facto detention with detainees deprived of the fundamental safeguards. ECRE is opposed to the use of detention for asylum and migration purposes except for in the very narrow circumstances in which it is allowed by international and EU law; where it is used it must be a measure of last resort and it must be formally defined as such in order that the safeguards apply.

Risk of breaches of data protection and privacy rights (Articles 10, 11, and 12): the Regulation provides for access to EU databases to the authorities in charge of the screening for the purpose of identity and security checks. Expansion of the purposes and uses of EU information systems when interoperability is in place, as well as expanding the range of actors granted access, aggravates long-standing concerns regarding the erosion of the purpose limitation principle and overall the protection of the rights to respect for private life and for the protection of personal data as enshrined in Article 7 and 8 of the EU Charter.

Risk of refusal of entry without a procedure (Article 14(1)): besides frequently-quoted return and asylum procedures, an outcome of the screening is also a refusal of entry. The Regulation does not emphasise the procedure of refusal of entry as it does for return and asylum and does not specify that entry may be refused in or as a result of a procedure respecting Article 14 of the Schengen Borders Code (SBC). The risk is that at the end of the screening process, the person would merely be issued a debriefing form and be directly refused entry without even the safeguards laid down in the SBC. Under Article 14(2) of the SBC, entry may only be refused by a substantiated decision stating the precise reasons for the refusal. The decision should be given by means of a standard form, as appended to the SBC, filled in by the authority empowered by national law to refuse entry. The completed standard form should be handed to the person concerned, who should acknowledge receipt of the decision to refuse entry by means of that form. Under Article 14(3) of the SBC people refused entry have the right to appeal. ECRE strongly advises that the refusal of entry fall within the scope of existing provisions in this area (which in any case remain part of the legal framework).

In terms of effectiveness, the purpose of the screening is the strengthening of the control of persons who are about the enter the Schengen area and their referral to an appropriate procedure. To this end, the object of the screening is the identification of the persons concerned, verification using the relevant databases that the person does not pose an internal security threat, and assessing health and specific protection needs. In that regard, there does not seem to be much added value of the Regulation as most of these tasks are already carried out by border guards under the Schengen Borders Code or asylum authorities under the Asylum Procedures Directive. The Regulation does not explain how this new procedure would relate to current procedures and the tasks arising of border guards and asylum authorities. To expand the competences and protection mandate of border guards, it would be easier to amend the Schengen Borders Code. These concerns are compounded by the fact that the screening procedure will involve considerable resources from the EU budget – over EUR 400 million for the period 2021-2027. Member States will need to invest in infrastructure and personnel. It is noteworthy that the proposal was not accompanied by an impact assessment. Given that human rights concerns regarding the Screening Regulation, in particular quasi systematic detention, outweight its beneficial features, except for the border monitoring mechanism, ECRE does not support the Screening Regulation. If it is to be adopted, then at least the safeguards and conditions described here should be added.