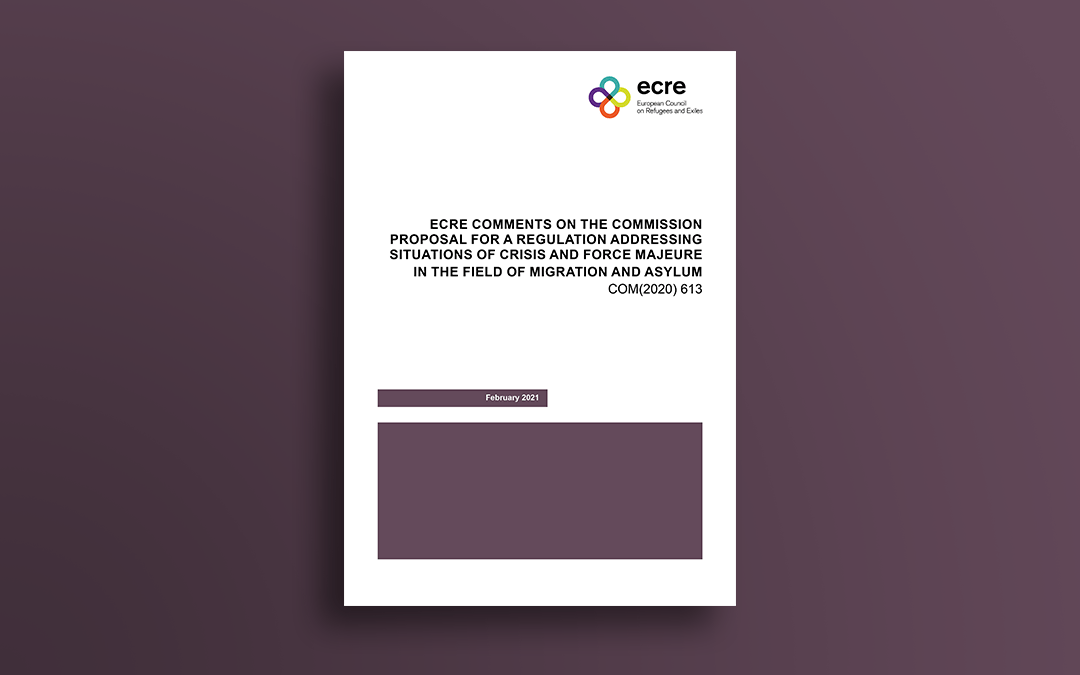 This ECRE Comments Paper covers key observations and recommendations on the Commission proposal for a regulation addressing situations of crisis and force majeure in the field of migration and asylum.

The main fundamental rights affected by the current proposal on the crisis regulation are the right to asylum (Article 18 EU Charter), the prohibition of torture and inhuman or degrading treatment or punishment (Article 4 EU Charter, Article 3 ECHR), the right to liberty and security (Article 6 EU Charter, Article 5 ECHR), protection in the event of removal, expulsion or extradition (Article 19 EU Charter), the rights of the child (Article 24 EU Charter) and the right to an effective remedy (Article 47 EU Charter, Article 13 ECHR). Many of them relate to the extension or expansion of problematic concepts, as already introduced in other legislative proposals, mainly the border procedure, in the amended APR proposal, as well as the introduction of return sponsorship in the proposal for a Regulation on Asylum and Migration Management (hereafter: RAMM). These comments therefore need to be read together with the Comments on these respective instruments.

ECRE does not support a separate legal instrument with far reaching derogations in times of crisis or force majeure, both concepts that remain vague under the proposal. Furthermore, there is no need to create a specific legal regime to operate in times of crisis and it should certainly not apply when there is merely a “risk” of crisis. There are already provisions in EU law that allow for adaptation in emergency situations, including provisions that allow for derogation from elements of the legal framework and provisions that allow for the introduction of special emergency measures. The former include general provisions applicable in all areas of law, specifically in Article 72 TFEU. Those related to asylum law are contained inter alia in Article 78 TFEU, as well as in secondary legislation.

It is also highly questionable whether the proposed measures are able to achieve the objective of addressing a crisis situation or a situation of force majeure. The proposal is unclear on how the proposed measures will mitigate a crisis. The link between the reasoning and measures remain often unclear, especially when it comes to the derogatory measures. The extended and expanded border procedure is likely to exacerbate a crisis, while sufficient and suitable solidarity measures are lacking at the same time. The measures, and the impact they have on the rights of individuals, are not proportionate to the goals.

A rapid triggering of solidarity makes some sense as a response to a crisis situation (but remains limited in this proposal). Nevertheless, the choice for far reaching derogatory measures seems to suggest that this instrument represents a political deal than a solid legally necessary solution.

The impact on the fundamental rights of people on the move cannot be ignored. The asylum acquis represents a balance between the interests of states and the human rights of people on the move. Under the current legal framework this balance has already been tilted in favour of the interests of states. With the proposed legal changes in this instrument, as well as in the other legislative proposals that accompanied the Pact, the balance further tilts in that direction. The current situation is combined with the lack of respect in practice for the procedural guarantees, that are supposed to protect applicants.

As with restrictive measures in the Pact as a whole, the underlying justification is that an increasing proportion of those arriving are not entitled to international protection. The harsher measures are supposed to target this group however they often disproportionately affect refugees rather than those without protection needs; the provisions of the Crisis Regulation are no exception. Notwithstanding the lack of a definition of crisis, it seems to mean times where there is an increase in the number of people seeking protection in Europe and direct references are made to 2015. The crisis of 2015/2016 and other major protection crises, such as the 1992-1996 and 2000-2001 displacements, are times when the vast majority of those seeking protection in Europe were refugees. Any potential crises are likely to be similar. Thus, refugees are likely to be most affected by the proposed measures to create or expand poorer quality approaches to asylum in times of crisis.