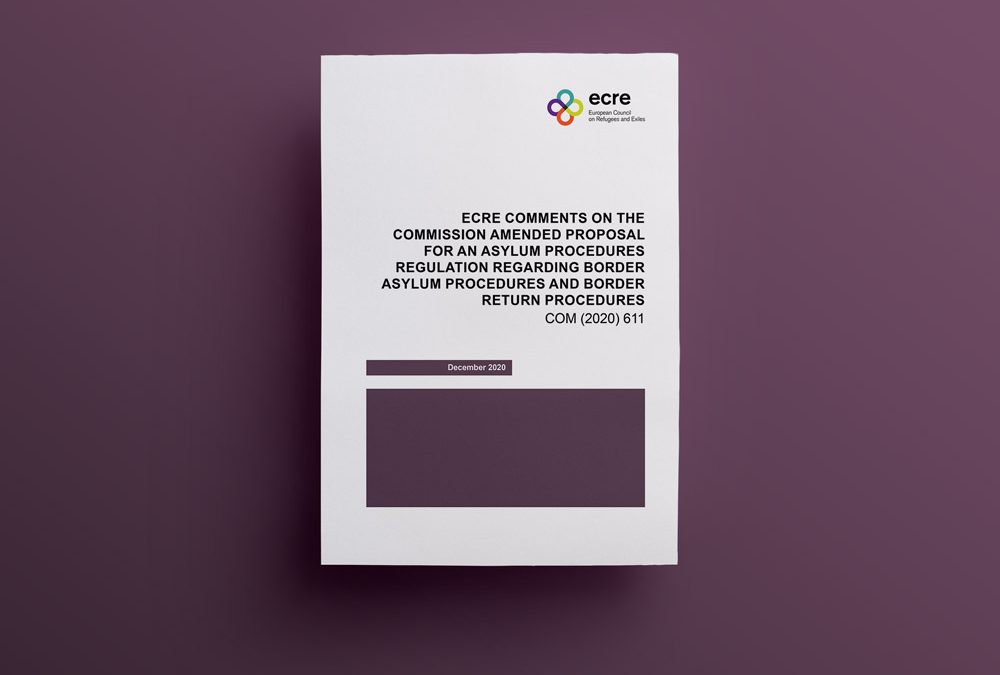 ECRE is publishing key observations and recommendations on the Commission amended proposal for an Asylum Procedures Regulation.

Nevertheless, if the proposal is to be adopted, ECRE submits the following (non-exhaustive) key observations and recommendations on the Commission proposal for a Regulation establishing a common procedure for international protection in the European Union, to ensure that the proposed legal framework is in compliance with these fundamental rights. The concrete proposals for amendments can be found throughout the text.

Right to Asylum: The difficulty in accessing the territory and the asylum procedure, as well as the use of the fiction of non-entry in the context of border procedures, may in certain circumstances undermine the right to asylum under Article 18 of the EU Charter. As elaborated on in ECRE’s comments on the Screening Regulation, ECRE recommends that the legal fiction of non-entry is removed from the proposals, and that applicants are legally considered to have entered the territory of the EU Member States. ECRE also suggests targeted amendments to Article 41 to ensure that each applicant has access to a fair and efficient asylum procedure. Among these proposals ECRE suggests deleting the 20% threshold as a ground for the (mandatory) application of the border procedure (Article 40(1)(i)).

Prohibition of torture and inhuman or degrading treatment or punishment and principle of non-refoulement: with its ambition of creating a “seamless” link between asylum and return procedures, the current proposal creates protection gaps, through which it might expose individuals to treatment in violation of Article 3 ECHR, Article 4 and 19 of the EU Charter, and the principle of non-refoulement. ECRE proposes amendments to the proposal to build in safeguards in this regard. Targeted amendments are proposed to Article 35a, by emphasizing that a return decision following the rejection of the asylum application can only be issued following a full examination pursuant to Article 2 and 3 ECHR and Article 2 and 4 EU Charter, covering the aspects which have not been assessed during the examination for international protection. Member States should also keep the option of granting other statuses provided for in national law after the rejection of an asylum application in the border procedure.

Right to liberty and security: to ensure respect for the right to liberty and security ECRE proposes several amendments to Article 41 and Article 41a regarding the location of the border procedure, and the provisions regarding detention. When applying the border procedure Member States shall take into account that an applicant for international protection should not be held in detention for the sole reason that he or she is seeking international protection. Detention can only be imposed based on the legal grounds set out in Article 8 proposed Reception Directive, and as a measure of a last resort when it proves necessary and on the basis of an individual assessment of each case, and if other less coercive alternative measures cannot be applied effectively. Vulnerable people and children should never be detained. Where Member States impose restrictions on freedom of movement, a decision in writing should qualify the measures as either detention or a restriction on freedom of movement, with the reasons for the restrictions stated in fact and in law.

Rights of the Child: ECRE recommends amending Article 41 (5) to exempt all children below the age of eighteen (instead of 12 as foreseen in the proposal) and their family members from the border procedure. A similar exemption should be included in the provisions in Article 41a regarding the border procedure for carrying out return. This is in line with the internationally recognised definition of children, which provides that every person until the age of eighteen is a child, as included in article 1 of the Convention on the Rights of the Child, as well as reflecting the Commission’s Communication on the rights of children in migration.

Right to an effective remedy: ECRE proposes several amendments to Article 54 (suspensive effect of appeal): In ECRE’s view, providing an applicant with an automatic right to remain on the territory during the time within which the right to an effective remedy must be exercised and pending the outcome of the remedy in case the applicant exercises such a right, constitutes the best guarantee to ensure that their right to an effective remedy and the principle of non-refoulement are respected in practice. It also avoids creating an additional burden for over-stretched judicial systems because asylum seekers are not required to launch a separate request to remain on the territory and courts are not required to address this issue separately.