ECRE and UNHCR organised a policy roundtable in Brussels 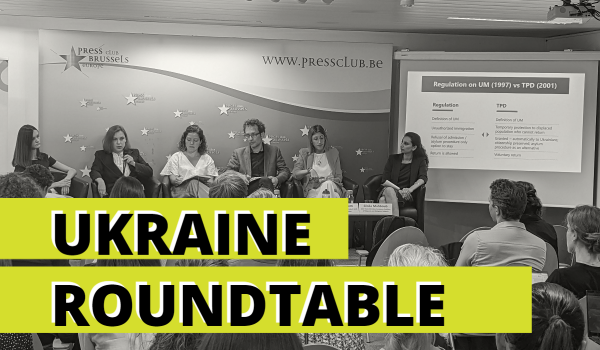 Entitled: Taking stock of the EU’s response to the Ukrainian Displacement

Following the military invasion into Ukraine in February 2022, millions of people were forced to flee seeking safety and protection. According to UNHCR, more than seven million refugees from Ukraine were recorded across Europe, with nearly 4 million registered for temporary protection or similar national protection schemes in Europe. On 3 March 2022, the European Commission invoked the Temporary Protection Directive (TPD) and on 4 March 2022, the Council implementing decision was adopted. Preliminary monitoring of the implementation of the TPD reveals challenges arising either due to the legal design of the TPD or due to its implementation in practice.

The policy roundtable sought to first examine the challenges and good practices in the implementation of temporary protection regimes and immediate and long-term priorities to address the challenges. Beyond the TPD implementation, it addressed the issues on EU operational assistance and funding for the response, with panelists offering their assessment, predictions and recommendations on the main challenges and emerging good practice. It also considered how to ensure that a two-tier system for beneficiaries of international protection and those under a temporary protection statute is not established in the EU Member States.

In a second session the policy roundtable covered the future of asylum in Europe. Panelists shared their insights on the asylum reform proposals, the effect of TPD on the wider EU asylum system as an instrument of the Common European Asylum System (CEAS), and the possibilities to reflect the EU response to the Ukraine displacement for the strengthening of the European asylum system. They considered the state of play of the reform proposals, lessons learned from the Ukraine response and the likely outcomes of negotiations.

Over 100 participants joined the event. Speakers included representatives from the Council of the EU, the European Parliament, and European Commission, as well as from civil society, including two representatives for Right to Protection, a Ukrainian NGO who joined from Ukraine.

The policy roundtable is the latest in a series of roundtables on asylum in Europe which is part of the Strategic Partnership between UNHCR Regional Representation for EU Affairs and the European Council on Refugees and Exiles.