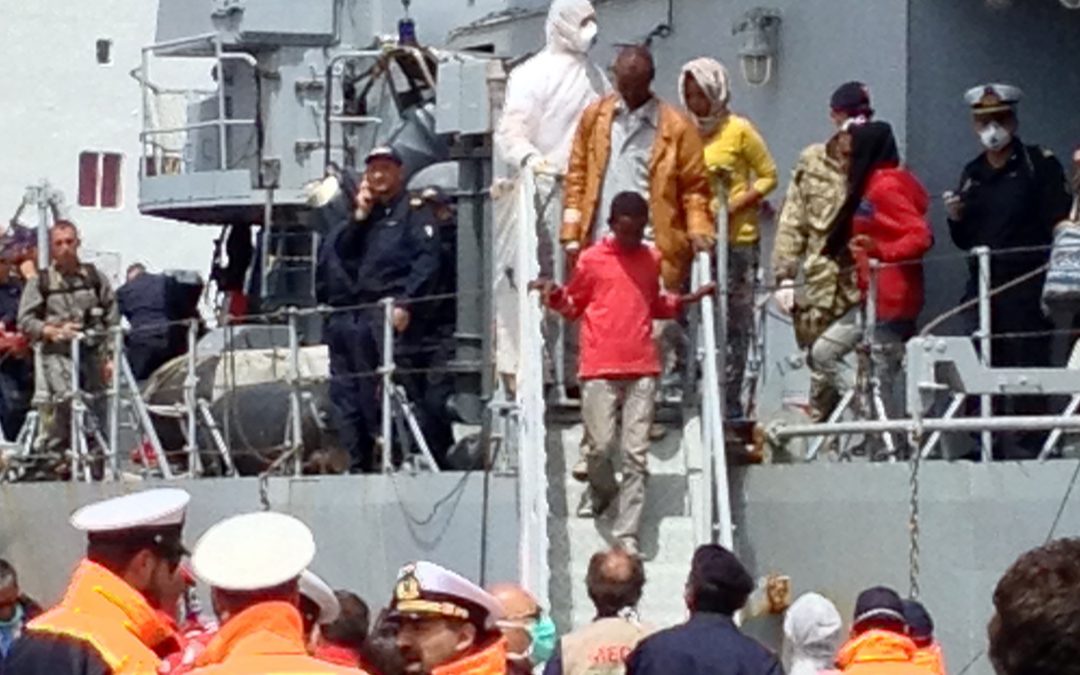 The sister organizations borderline-europe in Sicily and borderline Sicily Onus are observing and documenting the situation directly from the ground as well documenting practices of institutions and private actors involved in migration reception in Sicily. ECRE talked to Lucia Borghi, staff of Borderline Sicilia Onlus and Judith Gleitze, head of the field office of borderline-europe in Sicily and part of the management board of the association with headquarter in Berlin.

Could you give us your insides into the chronology and concerns of procedures that take place when refugees enter Italian harbors?

There are many ports of entry – Palermo, Pozzallo, Augusta and Catania among others and the process and level of support, protection and efficiency differs. But as a rule migrants are received by Italian Police, EU-Agency representatives – Frontex and EASO – on the mole. UNHCR, IOM, Save the Children and the Red Cross might also be present. Migrants will go through an identification process that could be prolonged for larger groups for days. The next step is the immigration office for fingerprinting and the transfer to either a hotspot or another reception location.

Among the many issues of concern across the ports of entry are: the lack of or the delayed access to basic supplies such as water, food and medicine. The inadequate identification of and support to vulnerable groups including minors. The limited access to legal assistance and information and of course the deeply problematic quality of accommodation in tents.

It has been reported that for every 100 to 150 people that arrive, two are arrested. Is it justified to suggest that is a certain quota system behind the arrests?

Italian and Frontex officers seem to under the wrong assumption that smugglers and facilitators are still present in each boat, some migrants, usually supposed drivers and compass men are intercepted and accused of being involved in trafficking. This happens despite the fact that the large majority – in our opinion nearby all of them are in fact victims of trafficking rather than traffickers.

Unfortunately we did not get the data requested from the authorities, but yes, normally for every boat at least one or two people will be arrested, we do not know if there is a quota system in place, but practically we found consistent evidence in all our interviews that it does work like this.

What kind of investigative measures are used to establish protection needs among migrants and identify potential traffickers?

During the identification, people are selected in so called ‘economical migrants’ and migrants that are considered entitled to ask for international protection. This selection happens basically on the basis of the country of origin and according to the agreements that Italy has with some North African countries. Usually people from Tunisia, Algeria, Morocco and Egypt receive a rejection paper (provvedimento di respingimento differito) without a proper interview. As a consequence they are required to leave Italy through the border of Roma Fiumicino within seven days and are likely to end up in the streets without documents, money, clothes or food.

While we cannot exclude the slight possibility that there are drivers or others on board the migrant ships who could be connected to traffickers it is deeply problematic that people are arrested on the basis of very random and doubtful criteria. We hear many testimonies from people with limited perspective of qualifying for international protection being offered documents or assistance in exchange for ‘evidence’ against other migrants or being threatened with complications if they don’t. At the same time random criteria such as of behavior or cloth setting people apart, stress or exhaustion also seems to be used as indicators of guilt by the police.

The lack of qualified interpreters is another concern. Frequently the interpreters just recently arrived in Italy themselves. Most often they are working in precarious conditions without residence status and therefore they are in a position inferiority and unlikely to disagree with police conclusions.

Based on this highly doubtful investigation people are labelled traffickers and without the possibility to find a lawyer, they are imprisoned and processed with limited chances of a fair trial.

The Eunavfor Med operation created a need to ‘make numbers’ and while numbers are indeed made the real traffickers remain in Libya and elsewhere. This it is not a just a question of Italian police misinterpreting the situation but of an intense EU pressure to make results.

What is your analysis the perspective of this method?

This method is not helping to stop trafficking. The smugglers are not an isolated group placed in migrant boats.  There are deep links between militias and networks involved in trafficking and many doubtful people are benefitting from the opportunities of chaos in war-torn Libya – everything is organised even in collaboration with parts of the so called Libyan Coast Guard. Everyone knows about the current situation in Libya. So, criminalizing migrants – themselves victims of these traffickers and with horrible experiences in Libya – is not acceptable and does not lead to anything.

The interview is based on findings published in the Report Criminalization of Flight and Escape Aid, borderline-europe, March 2017

Best practice and information in regard to the project Borderline Sicilia constantly updated are available on the blog http://siciliamigranti.blogspot.it and for borderline-europe on www.borderline-europe.de

ECRE Weekly would like to thank Judith Gleitze and Lucia Borghi for taking the time.