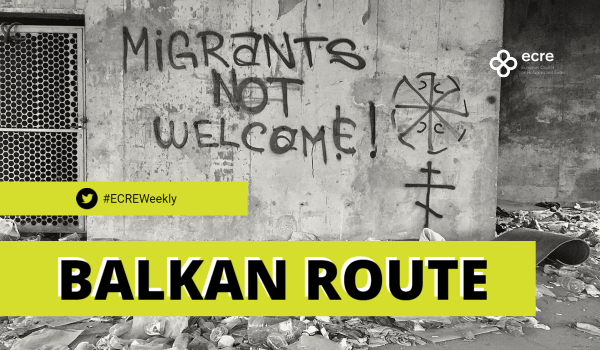 NGOs are calling for independent and effective investigations into systematic pushbacks by Croatian officers. The European Ombudsman has found that the European Commission failed to ensure respect for rights in EU-funded border operations by Croatian authorities. Asylum and reception conditions for Serbia remain deplorable, according to ECRE member organisations. New testimonies of border violence confirm Hungary’s inhumane approach to asylum seekers deemed “illegal migrants” remains unchanged, despite the country’s open arms to Ukrainians.

At least 9,114 people were pushed back from Croatia last year, and more than 16,400 pushbacks took place in 2020. ECRE member organisation Centre for Peace Studies (CMS) notes that: “Numerous testimonies provide a detailed account of the six-year-long pattern police officers use when executing pushbacks for all these years, making it impossible to label them as “isolated incidents”, as the Croatian Ministry of the Interior is desperately trying to”. NGOs have thoroughly documented beatings, sexual assault, humiliating acts, and the denial of access to international protection at Croatian borders.

On 2 March, 18 civil society organisations called for an end to these violent violations of fundamental rights. In their statement, they demand independent and effective investigations, accountability for those responsible for implementing and covering-up illegal practices, and a truly independent and transparent border monitoring mechanism to prevent future abuses. Signatories included ECRE’s members ASGI (Associazione Studi Giuridici sull’Immigrazione), asylkoordination österreich, Dutch Council for Refugees, PIC (Legal centre for the protection of human rights), Centre for Peace Studies (CMS) and Centre for Research and Social Development (IDEAS). The NGOs highlight the need for effective border monitoring, pointing out that the monitoring mechanism currently implemented – based on agreements between the European Commission and Croatia’s interior ministry – lacks independence or effective access.

According to CMS, the European Commission has produced “no adequate reactions” to blatant violations of European law by Croatian authorities. Rights groups have said the failure to sanction Croatia, and the approval of a further 122 million euro of EU border control funding to the country, risks EU complicity in abuses. Now, the European Ombudsman has confirmed “significant shortcomings” in the Commission response. An inquiry published on 24 February has found that the European Commission failed to ensure that fundamental rights were respected in EU-funded border operations since 2018.  According to Amnesty International’s EU Office, an ECRE member: “the European Commission financed Croatia’s border operations, including the salaries of border guards who are notorious for violent treatment of migrants and asylum-seekers, and yet it turned a blind eye to abuses”. The Ombudsman deems it “regrettable” that the border monitoring mechanism was set up only three years after Croatia begun receiving EU emergency funds. Now, the Commission must provide information on whether the mechanism in place is independent or effective, including by requesting “concrete information from the Croatian authorities on how it has investigated reports of mistreatment of migrants and asylum seekers”.

Serbia is primarily a transit country for people seeking asylum in Europe, particularly Syrians and Afghans. Only a fraction of the 60,407 people that passed through the country’s accommodation facilities in 2021 sought asylum in Serbia. Yet the country’s asylum and reception system faces serious criticism from NGOs, including ECRE member Asylum Protection Centre (APC). APC notes that of the 2,306 people that applied for asylum in the country last year, only 14 were granted protection. Another ECRE member, the Belgrade Centre for Human Rights, points out that, since the establishment of the asylum system in 2018 and the end of 2021, protection was granted to only 208 people. Asylum seekers report being shut in vans, beaten, and forced to sleep outside. As displacement from Ukraine unfolds on a massive scale, APC have urged Serbia authorities to drastically improve reception capacity and asylum procedures in preparation for arrivals crossing Eastern Europe.

New reports of border violence confirm that Hungary’s warm welcome for Ukrainians does not extend to Syrians, Afghans, Iraqis and others fleeing violence. Violent and illegal pushbacks of asylum seekers by Hungarian authorities, long since documented by NGOs, are reportedly on the increase at the Serbian border. “The Hungarian police treat us like animals. Maybe half the people here have been beaten by them” said one man interviewed by Al Jazeera. ECRE member the Hungarian Helsinki Committee (HHC), note that: “Head injuries, broken limbs, broken hands, the use of batons, the use of dogs” and “all are fairly commonplace” during these pushbacks. In January, Border Violence Monitoring Network (BVMN) recorded 29 testimonies of pushbacks impacting 344 people across the Balkans, several of which concerned Hungarian authorities.

The violence stands in stark contrast with the welcome Hungary has provided for Ukrainians. “All those fleeing from Ukraine will find a friend in the Hungarian state,” said prime minister Viktor Orban following Russia’s invasion. By 11 March, Hungary had accepted more than 225,000 Ukrainian refugees. Yet, the premier emphasised that Hungary would remain closed to “illegal migrants”, a category that has in the past included people fleeing war and conflict in places like Syria. Orban, notorious for his hardline stance on migration policy, has called people on the move “Muslim invaders” and said that “all terrorists are basically migrants”. Further, in December Hungary’s government declared it would not modify domestic immigration law that was found by the European Court of Justice to violate EU law.