Algeria: growing number of migrants expelled into the Sahara desert to face death by exposure 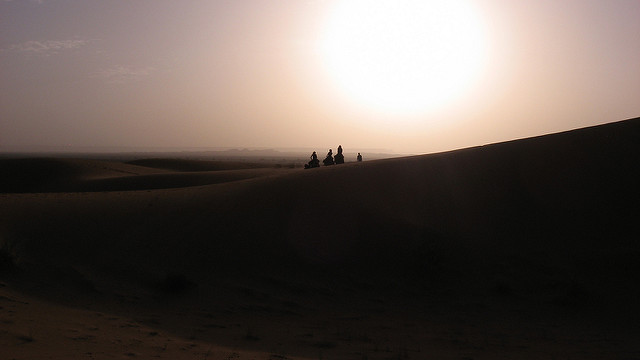 A report published by the Associated Press on Monday contains testimonies from individuals from sub-Saharan countries, who were expelled from Algeria to Niger. It describes how pregnant women and children were among those abandoned at the border, with others being threatened at gunpoint to walk through the desert without food or water in temperatures reaching 48 degrees Celsius.

In the last 14 months since the International Organization for Migration (IOM) began recording the number of expulsions, over 13,000 migrants are said to have been forced into the desert after mass expulsions by the Algerian authorities, with an unknown number of these unable to survive the onward journey to safety and perishing in the desert.

The report’s testimonies from those who survived the 15-kilometre walk from Algeria’s border zone to the closest town in Niger contain details of people collapsing in the desert, or dying of dehydration after becoming lost in the difficult terrain. A woman describes giving birth to her stillborn child during the trek, forced to bury him in the desert before continuing the journey. The migrants recount having their mobile telephones stolen by Algerian police before being deposited in the desert, making them unable to navigate.

Camille Le Coz of the Migration Policy Institute in Brussels states that the number of migrants going to Algeria may be increasing as a side effect of Europe blocking the Libyan crossing. An IOM official working at the border town of Assamaka is quoted as saying “They come by the thousands….I’ve never seen anything like it […] It’s a catastrophe.” The IOM put out a press release this week expressing their concern at the situation.

Human Rights Watch also reported this week that they had interviewed people who said that the Algerian authorities had raided areas where migrants are known to live, arresting them on the streets or on construction sites, and expelled them in large groups, in most instances with no food and little water. The Algerian authorities did not consider the migrants’ legal status in Algeria or their vulnerabilities, despite some of the migrants being in possession of a valid visa or a certificate from the United Nations High Commissioner for Refugees (UNHCR) stating that the agency is reviewing their claim for refugee status. Sarah Leah Whitson from Human Rights Watch said “Algeria has the power to control its borders, but that doesn’t mean it can round up people based on the color of their skin and dump them in the desert, regardless of their legal status and without a shred of due process.”

On May 22, the UN Office of the High Commissioner for Human Rights called on the Algerian government to “cease the collective expulsions of migrants.” Earlier in June, the president of the Algerian Red Crescent pushed back against NGO and UN critiques of the deportations, “It would make more sense to point the finger not at the Algerian government, which has the upper hand in the present case, but at the people who caused all the tragedies being unwillingly suffered by the African migrants,” said Saida Benhabiles.