AIDA Update: The implementation of the Dublin III Regulation in 2021 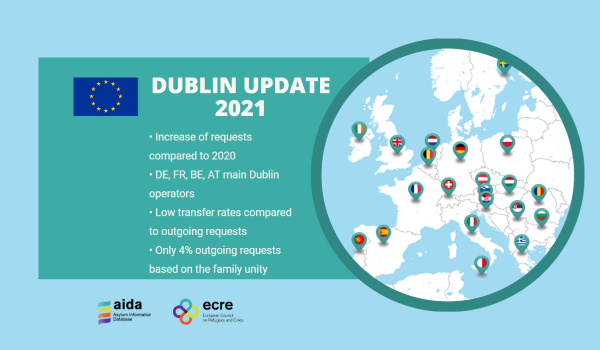 The latest statistical report by AIDA, managed by ECRE, provides an update on developments in legislation, policy and practice relating to the application of the Dublin III Regulation in 2021, as well as a short overview on the suspension of Dublin transfers following the outbreak of the war in Ukraine.

Among the legislative proposals that form part of the Pact on Migration and Asylum launched by the European Commission is the Regulation on Asylum and Migration Management (RAMM), which aims to repeal Dublin and introduce new rules on responsibility sharing, along with solidarity mechanisms. The proposal raised significant concerns, especially due to the fact that the rules on allocation of responsibility it puts forward remain very close to the ones applicable under the current Dublin system, despite having been a significant source of conflict among Member States since the establishment of the Common European Asylum System (CEAS). Since the launch of the Pact, however, limited progress has been made on the reform, as Member States remain divided on the rules on the allocation of responsibility and on solidarity measures.

In the meantime, the Dublin III Regulation is the applicable legal framework for determining which Member State is responsible for an application for international protection. ECRE’s report shows that the continuous practice of requesting transfers that cannot be completed, the disregard that most Member States have for the prioritisation of family provisions, and the numerous shortcomings in national asylum systems, call into question the operability of the current system, and that of any alternative which is not based on a deeper reform of rules on responsibility sharing among Member States.

Even though they did not reach pre-pandemic levels, the year 2021 was marked by an increase in the number of Dublin procedures compared to 2020. Nevertheless, the number of transfers implemented in practice remained low throughout the year, partly as a consequence of restrictive COVID-19 measures, but mostly as a continuation of the trend set in previous years: only a small number of transfers are actually implemented, compared to the number of requests submitted. Of the 27 countries represented in the report – it should be noted that two additional countries were not considered, as they initiated no Dublin procedure throughout the year – none achieved Dublin transfers in more than half the procedures they initiated, and 19 out of 27 countries registered a transfer rate below 30%.

The top three operators of the Dublin system in 2021, Germany, France and Belgium, all registered a noticeably low transfer rate. As an example, Germany implemented 2,656 transfers out of 42,284 requests in 2021, marking a transfer rate of only 6%, even lower than in the previous year.

The report also demonstrates the prevalence of “take back” over “take charge” Dublin requests, showing how the majority of people placed in a Dublin procedure in European countries had already lodged an asylum application in another Member State. The report argues that, while the reasons that bring individuals to leave the country in which they lodged their application are varied, they can often be ascribed to the person’s individual and socio-economic situation, their family status or the shortcomings affecting national asylum systems, including poor reception conditions, especially taking into account the differences in living standards, labour-market conditions, and access to government support among Member States. This considered, even if an increase in the number of transfers was attainable, it would arguably not be able address the root causes of onward movement.