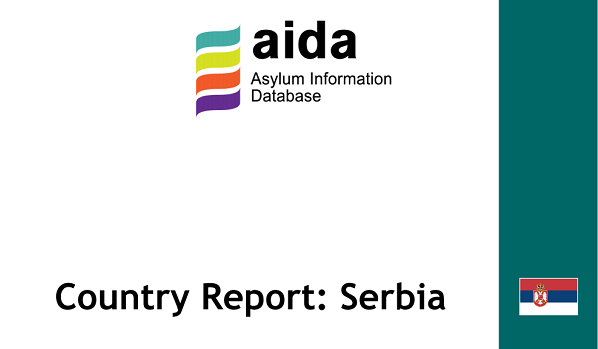 The updated AIDA Country Report on Serbia documents the main developments in the area of asylum procedures, reception conditions, detention of asylum seekers and content of international protection in 2020. It demonstrates that many persons continue to be collectively expelled to and from Serbia without any prior assessment of their protection needs.

In 2020, figures made available by UNHCR and its partners indicate that four countries, i.e. Bosnia, Croatia, Hungary and Romania, have summarily returned more than 25,000 persons to Serbia. Upon return, these individuals may face serious obstacles in accessing the asylum procedure, misdemeanor proceedings for irregular entry to the neighboring countries as well as expulsion orders. Moreover, collective expulsions from Serbia persisted, especially at the southern border with North Macedonia where the Government has built a barbed-wire fence. At least 350 persons were collectively expelled from Serbia to North Macedonia in 2020. A landmark ruling from the Serbian Constitutional Court of 29 December 2020 confirmed for the first time that illegal border practices have been carried out by the authorities. Further, reports of persons facing arbitrary detention, collective expulsion and risks of refoulement at the airport Nikola Tesla generates concern.

COVID-19 introduced additional obstacles in accessing the asylum procedure. Registration and first instance procedures were suspended for nearly two months from 15 March to 7 May 2020. In 2020, only 145 persons were able to lodge an application for international protection and the number of persons issued with registration certificate significantly dropped. As regards the recognition rate of the Asylum Office at first instance, it decreased to 27.2% in 2020 compared to 32.5% in 2020. The inconsistency in the decision-making process regarding similar cases continued to be reported, while certain improvements were noted in relation to unaccompanied and separated children. The length of the asylum procedure remains highly problematic. It drags on from 8 to 12 months, or even longer in certain cases, contributing inter alia to an increase of absconding. At appeal stage, the Asylum Commission and the Administrative Court continue to lack corrective influence over the decisions of the Asylum Office, as negative decisions are very rarely overturned.

The COVID-19 pandemic has further severely impacted the right to freedom of movement of refugees, asylum seekers and migrants who were prohibited from leaving asylum and reception centres for 3 months. Yet, the Constitutional Court dismissed initiatives for the review of constitutionality of the legal framework that led to the arbitrary detention of more than 9,000 individuals residing in asylum and reception centres, which has further led to several applications being submitted to the European Court of Human Rights. Overcrowding and inadequate reception conditions also continue to be reported. The National Preventive Mechanism (NPM) confirmed that conditions in the reception centres of Obrenovac and Adaševci could have possibly amounted to inhumane and degrading treatment during the COVID-19 lockdown. Issues of violence, ill-treatment and related incidents from reception staff was also reported throughout the year. As of March 2021, several thousand refugees, asylum seekers and migrants are still accommodated in tents or collective premises with dozens of bunk beds in unhygienic conditions, deprived of privacy and with insufficient access to sanitary facilities.

The integration of refugees and asylum seekers still largely depends on the assistance of CSOs, despite the clear mandate of the Commissariat for Refugees and Migration (CRM) to provide social, economic and cultural assistance. The lack of institutional support limits the access to the labour market and basic services. During the state of emergency, refugee and migrant children were deprived of the possibility to attend school and to follow online courses. Access to healthcare was also severely impacted in 2020, both due to COVID-19 and the high rate of overcrowding in reception centres. Nevertheless, for the first time in 2020, a family reunification procedure was carried out in Serbia. The procedure took 10 months but could potentially set precedent for future family reunification cases.