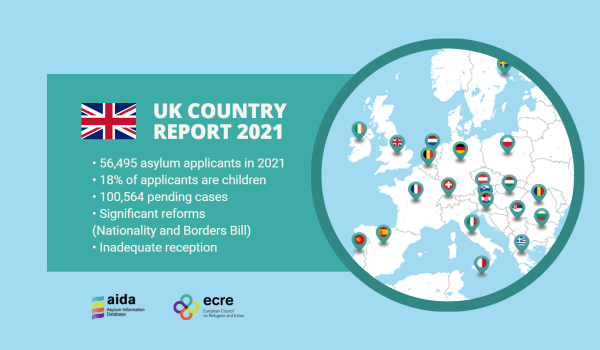 The updated AIDA Country Report on the United Kingdom provides a detailed overview on legislative and practice-related developments in asylum procedures, reception conditions, detention of asylum seekers and content of international protection in 2021.

The government launched broad reforms of the asylum system in 2021. From the beginning of March, significant proposals were announced through the New Plan for Immigration culminating in the Nationality and Borders Bill. The bill, that was met with severe critique by human rights actors and politicians alike, was denounced as incompatible with international law. Clause 11 of the Bill introduced a two-tier system categorising refugees according to their mode of arrival, entailing that spontaneous asylum seekers, whose arrival was not authorised prior to travel, could be prosecuted, processed outside of the UK and granted differential (lesser) rights upon potential recognition. The clause sparked numerous controversies, and was recently rejected by the House of Lords. However, the Bill continues its progress through parliament, and is envisaged to become an Act though Royal Assent by the end of March or early April 2022.

The crossing of small boats on the Channel from northern France received significant attention from media as well as the government during 2021. The Home Office made regular announcements about its plans to deter people from leaving the coast of France. This translated into various measures, such as the decision to prosecute individuals for illegal entry or facilitating illegal entry. Despite the fact that several of these prosecutions have now been quashed, given lack of evidence of clandestine entry, the government continued to refer to ‘illegal migration’ and to promote the Bill reforms as being aimed at facilitators and smugglers rather than individuals seeking asylum. In November 2021, it was reported that 27 people lost their lives attempting the crossing in a small boat, which led to intensified debates in parliament and the media about the need for a change of approach and critique of the current strategies including a joint public statement by public figures and NGOs.

After the Taliban takeover of Afghanistan, the UK government undertook evacuations, and established operation “Warm Welcome” for the evacuees. An initial policy statement gave an outline of the plans for those who were not UK citizens; namely, that evacuees would fall under two categories: those who had assisted UK military would join an expanded existing scheme (ARAP); others would qualify under a specific resettlement scheme for Afghans. Since September 2021, those brought to the UK under ARAP are granted Indefinite Leave to Remain, but its eligibility rules were changed in December 2021, to limit relocation to ‘those who furthered the UK’s military and national security objectives’; the latter scheme was opened only in January 2022.

As regards reception capacity, the accommodation estate suffered severe pressure throughout the year, and accommodation providers had to procure contingency accommodation for asylum seekers: some hotels and several former military barracks were repurposed for use as Initial Accommodation. The Independent Chief Inspector of Borders and Immigration released in March 2021 some key findings following the team’s visit to sites formerly used as military barracks. It reported issues in management and leadership, mental health problems among residents, an impoverished, run-down and unsuitable environment for long-term accommodation.