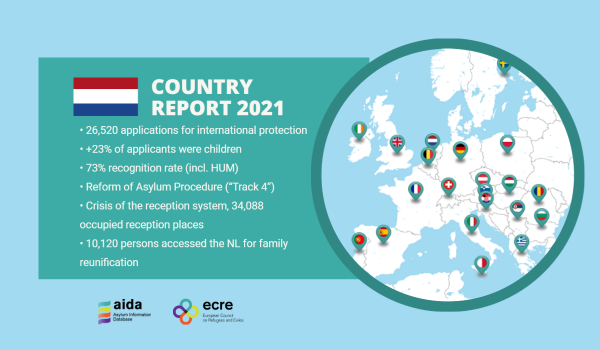 The updated AIDA Country Report on the Netherlands provides a detailed overview on legislative and practice-related developments in asylum procedures, reception conditions, detention of asylum seekers and content of international protection in 2021.

One key development in 2021 was the entry into force of the amendments of the Aliens Decree regarding the General Asylum Procedure (“Track 4”). The amendments formally provide rules for the registration/reporting procedure and the interview that takes place before the start of the rest and preparation period, while cancelling the first interview during the Regular Asylum Procedure. This means that asylum seekers who fall under the procedure do not benefit from legal assistance nor receive individualised information on the asylum procedure from NGOs. As a result, they might not be sufficiently informed about the potential impact of their statements on the outcome of their application.

In 2021, a total of 26,520 applications for international protection were lodged in the Netherlands, marking an important increase compared to 2020, when the total number of applications was 15,320. The overall recognition rate at first instance stood at 73.1% (i.e. 47.4% refugee status, 17.4% subsidiary protection and 8.3% humanitarian protection). Recognition rates reached an historical high for Afghans, that were granted some form of protection in 95.5% of the cases. Such figures should however be read with caution, since the approximately 2,000 Afghan nationals evacuated and transferred to the Netherlands after the Taliban takeover of Afghanistan were channeled into the short asylum procedure, and mostly recognised asylum status in a short time period, hence affecting the overall statistics.

From September 2021, the reception system of the country started coming under pressure. By the end of the year, a total of 34,088 people were accommodated by Central Agency for the Reception of Asylum Seekers (COA), 8,500 more than in 2020. People have been forced to sleep on the floor outside the first reception centre of Ter Apel, waiting their turn to register their application and be transferred to one of the many Emergency Reception Centres opened from September in response to the crisis. Afghan evacuees were initially stationed at locations provided by the Ministry of Defence; one of these was the large camp of Heumensoord, equipped only with tents normally destined to host events and accommodating around 1,000 people. The location, previously used to respond to the reception crisis the country faced in 2015, has been frequently criticised due to the health and security risks deriving from its inadequate facilities, and for lack of privacy offered to its inhabitants.

In 2021, reception centres continued registering shortages of places, partly due to COVID-19 health restrictions and to the limited availability of houses for rent in the country, that negatively affected also beneficiaries of international protection. As a response, from 1 November 2021 the so called “Hotel- en accomodatieregeling” (Hotel- and Accommodation Arrangement) was introduced, allowing status holders awaiting regular housing to be hosted in a temporary accommodation – that could be either a hotel, a holiday bungalow or a B&B – at the municipality responsible for later providing a long-term housing solution. Status holders remain entitled to the COA’s basic provisions, such as a weekly allowance and access to medical care, while receiving an additional payment of 75€ per week from the COA.