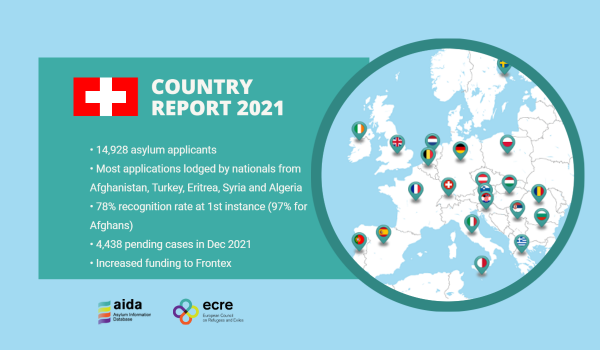 The updated AIDA Country Report on Switzerland provides a detailed overview on legislative and practice-related developments in asylum procedures, reception conditions, detention of asylum seekers and content of international protection in 2021.

In autumn 2021, there was a significant increase of persons entering Switzerland at the eastern border with Austria (691 persons only in July and August, compared to 224 from January until June). Most of them were minors from Afghanistan. A total of 14,928 persons applied for international protection throughout the year. Most applications were lodged by nationals from Afghanistan, Turkey, Eritrea, Syria and Algeria. The recognition rate at first instance stood at 78%, and reached up to 97% for Afghans, 90% for Turks and 91% for Eritreans.

A controversial policy was introduced regarding the possibility for immigration officials to access migrant’s mobile data in case that was the only way to verify their identity. Such approach was justified by lawmakers based on the fact that many people who request asylum in Switzerland enter without documents proving their identity; nevertheless, the Swiss Refugee Council and UNHCR criticised the measure as disproportionate and an assault on privacy rights.

An additional issue was reported regarding the health concept implemented by the SEM in French-speaking Switzerland, which prohibits direct contacts between legal representation and health professionals, both inside and outside the federal centres. In 2021, the situation deteriorated as the legal representatives were forbidden even to contact the infirmary, except for organizational requests like a date for an appointment date. Otherwise, they are only allowed to communicate through the SEM.

During 2020, there were a number of cases in which violence escalated in the federal asylum centres. A former federal judge was mandated to carry out an independent investigation into these incidents. The report was published in November 2021 and it concluded that undue coercion was used in individual cases in which criminal investigations had also been initiated. The accusation of systemic disregard for the rights of asylum seekers and of torture was dismissed. The report recommended amongst other points abstaining from delegating crucial security tasks to private security firms.

An important development – with a broader reach than asylum policy – was the fact that the Swiss Parliament backed a greater commitment to Frontex, the European Border and Coastguard Agency. At the end of September 2021, lawmakers approved an increase in Switzerland’s contribution to Frontex, from 14 million CHF (EUR. 13.5 million) to 61 million CHF (EUR 59 million) by 2027. The funding increase and commitment to deploy more Swiss staff is meant to contribute to the Agency’s ambition of building up a standing corps of 10,000 border guards by 2027, to “fight against cross-border crime”, and to more swiftly return irregularly-staying third country nationals. The move saw opposition from some commentators and a referendum was lodged, which will be voted by Swiss citizens on 15 May 2022.